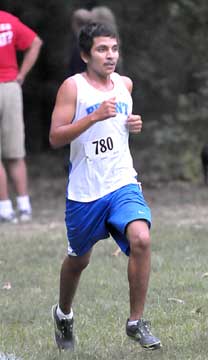 CONWAY — Luke Lindsley earned his second straight runner-up finish to lead the Bryant Hornets in a sixth-place performance in a field of 24 teams at the Conway Wampus Cat Invitational on Saturday. Lindsley, who placed second at Tuesday's Bryant Invitational, ran a time of 16:24 to finish one second behind Jacob Schultz of Marion.

Also earning a top 20 medal for the Hornets was Rodrigo Rodarte, who placed 17th in a time of 17:38.

"Luke ran another great race and came up just a little short,” commented Hornets coach Steve Oury. “The conditions were very hot, so even though his time was slower than Tuesday, this was really a better performance.

“Rodrigo also ran a super race, setting a personal record in really tough conditions,” he added. “I knew the heat would take a toll on a lot of people, and it did on us as well. I'm just glad we made it through the day with no serious heat-related problems."[more]

The Bryant Junior Hornets earned a second place finish out of 22 teams in the junior boys blue division, which consisted of each schools’ top seven runners. The Junior Hornets scored a total of 78 points to finish behind team champion Cabot, which had 60.

"I am very excited by how well the junior boys are running,” Oury stated. “In both junior high races we competed with a lot of heart and courage across the board.

“The guys in the blue race really ran well, with Austin Middleton setting a big personal record along with Clifton Hampton and Dru Wen. They all ran great races.

“The white division race was just awesome,” the coach continued. “Any time you get a perfect score in a race it's a lot of fun. Those guys really stepped up and competed. Now they need to carry that into the next meet in Russellville where all of the junior boys will run in the same race."

The Russellville Invitational is set for Saturday, Oct. 2.