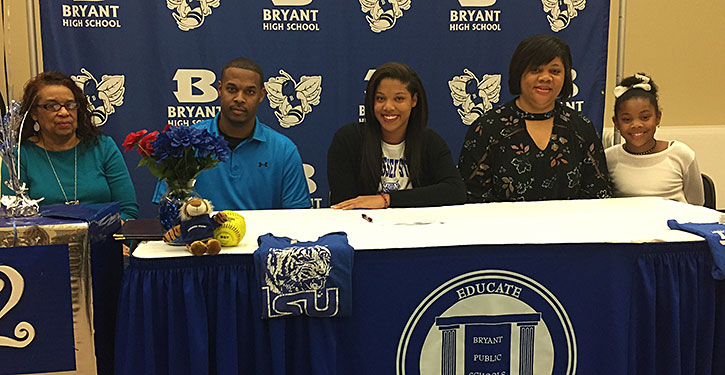 Stoic — whether the team’s 10 runs up or 10 runs down, an observer could walk up to a Bryant Lady Hornets’ softball game, look at Raven Loveless and not know.

“I’ve always been that way,” she explained on Wednesday. “I just focus in and I’m just quiet, just really into the game, show no emotion. I haven’t won a game without doing that.”

Indeed, teammate Maddie Stephens recalled, “When I was little, my dad always told me, ‘Right before you go out on the field, put your ‘game face’ on.’ Throughout the years, I started learning what that really meant and, once I met Raven, I said, ‘Oh, that’s what that looks like.’

“Someone might think that she’s not giving it her full effort or that she may not care but that’s far from the case,” acknowledged Lady Hornets softball coach Lisa Dreher. “That’s just how Raven is. She’s just very much in control of her emotions and what’s going on out there. I’ve seen her excel when the pressure’s there. She’s just a rock.

A three-sport starter over the last three seasons and an all-State, all-conference player in softball last spring, Loveless, the daughter of Marcus and Bridget, signed a national letter of intent to continue her softball career and her education at Tennessee State in Nashville next fall.

Last season, when the Lady Hornets went 28-5 overall and roared through the 7A-Central Conference unbeaten, Loveless was 15-0 in the pitcher’s circle. She pitched a team-high 89 2/3 innings and, at the plate, she hit .414.

Said Dreher, “They’re getting a well-rounded, solid athlete. She controls herself and the game out there very well. Raven’s in her own game when she’s out there on the mound.

“I think she’ll be a good college athlete,” she added. “She’s got a good head on her shoulders. Academically, I know she can handle it and there’s no question about her athletic ability.”

Loveless plans on becoming a dentist.

Along with softball, Loveless has been a standout in basketball and volleyball. She led the Lady Hornets volleyball team this fall in kills.

In order to get herself fully prepared for her senior season in softball in the spring, Loveless gave up basketball.

“I love basketball but, last year, my knee got hurt during a game and I didn’t want that to interfere with my scholarship so I had to cut out one sport and that’s just the sport I cut,” she explained. “And I’m captain this year so I knew, to be more involved with the softball team, I’d need to focus mainly on that.”

“I think it’s been a good thing that she’s played so many sports for so long,” Dreher stated. “She’s definitely very strong in her core and has a lot of hand-eye coordination. That’s part of the reason.

“But being able to concentrate more on softball, being able to pitch in the off-season, I think we’ll see great rewards for that early on,” the coach acknowledged. “Usually, it took her a while to transition from basketball into softball but, this year, I hope she’s at the top of her game in February.”

Loveless has been playing softball since she was 5 years old.

“All my life we’ve traveled all over the United States and we’d play in showcase tournaments where colleges were there,” she noted. “I guess that’s when I realized that I could actually go to college and play. But this doesn’t stop me from working hard.”

It was fortuitous for the Lady Hornets that her bat began to come around last spring because, as the season developed and freshman Gianni Hulett emerged as a pitcher, it became Dreher’s strategy to alternate her two pitchers, two innings apiece.

“It had to work for both of them,” Dreher noted. “They both are very good athletes and don’t take a lot of time to get warm. They’ve obviously pitched a lot in their lives. They can come off the bench and throw whatever we need them to throw.

“At first, we were just going to try it and they both handled it very well,” she added. “I think it definitely kept the other teams off balance offensively.”

Loveless admitted, “At first, I wasn’t so sure of it because she’s a freshman and she’s coming in but I got used to it and I think it works best for the team. It was hard but I don’t mind at all.

“My hitting has gotten much better over the years,” she noted. “I’ve just practiced a lot harder and I guess out-hit some people so they just moved me up to the hitting position.”

“I think I have a good chance of hitting at Tennessee State,” Loveless asserted.

But she’s still got this spring at Bryant to go and the expectations are high.

“This past year was the best year we’ve had,” Loveless said of her time at BHS. “We won conference and we’ve never had a team that stays more together. That’s, by far, my best memory, being on this team.

“And we only lost two seniors so I think we’ve got it this year,” she concluded. “I expect huge things.”

If so, there’s no telling how excited Raven Loveless might get.