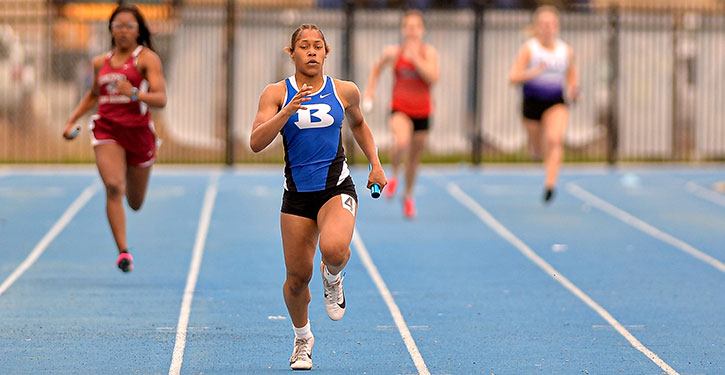 CABOT — Ella Reynolds and Eliza Parker ran 1-2 in the 400-meter run and the Bryant Lady Hornets won three of the four relay events including the 4 x 200 in school record time as they finished with 187.5 points, just shy of the 189 points by the host Cabot Lady Panthers at the WalMart Cabot Invitational on Tuesday.

In addition, Isabella Martinez earned a first-place finish in the discus and Madelyn Thomas won the pole vault for Bryant.

“The girls did a great job,” said Coach Brooke Meister, who is subbing in for Lady Hornets head coach Keith Dale as he recovers from surgery. “All of our relays came out and competed very well. Isabella Martinez really helped our team out by winning the discus.

“I am very proud of Ella Reynolds and Eliza Parker for running a great open 400 race,” she added. “They had to really work hard and run a great race to capture the first and second place finish.”

Lain was second in both hurdles events behind only Cabot’s Laylah Reese. In the 300 hurdles, Lain ran a 49.99 to Reese’s 49.03. Portia Probst earned fourth-place points for the Lady Hornets with a 53.16 clocking.

Bradford was second in the 800 with a time of 2:35.65. Kaitlin Inderrieden of Cabot won in 2:33.91 as the duo battled just as they had on Thursday at the Little Rock School District Invitational.

Chasity Jackson cleared 4’8” as she dueled once again with Conway’s Madison Holloway (5’2”). Parker was fifth at 4’6”.

Rounding out the Lady Hornets’ scoring was Singleton who was sixth in the triple jump (29’6”) and Scott-Smith who was seventh in the 100-meter dash with a time of 13.57.

Bryant is scheduled to return to competition at the North Little Rock Relays on Tuesday, April 13.