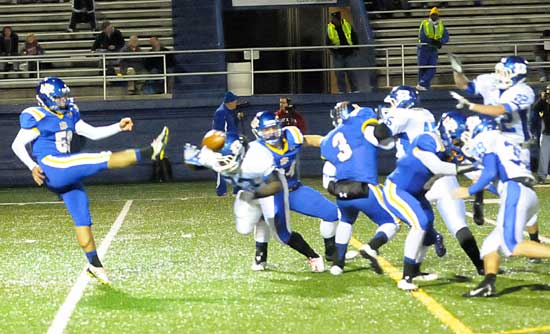 NORTH LITTLE ROCK — Bryant Hornets head football coach Paul Calley was unequivocal about[more] it before the game. His league-leading Hornets would have to play nearly perfect football just to have a chance at the end against the bigger, faster, stronger, deeper North Little Rock Charging Wildcats. 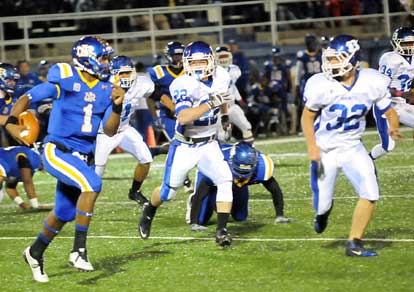 It didn’t take much scouting video for the Hornets coaches to realize that.

Unfortunately, the Hornets were far from perfect on Friday night, much because the Wildcats just wouldn’t allow it.

North Little Rock turned three first-half turnovers into two scores and great field position to build a 28-0 halftime lead on the way to a 35-0 victory.

But here’s the thing:

The Hornets are still in first place.

Though they’re tied for that spot with Conway and North Little Rock, they can clinch a share of the 7A/6A-Central Conference championship for the second year in a row, their fourth in the last eight seasons, with a win over the Little Rock Central Tigers at Bryant Stadium this Thursday.

Not a bad way to wind up the last season in the league for the foreseeable future. (The Hornets have been reassigned to the South starting in the fall of 2012.) 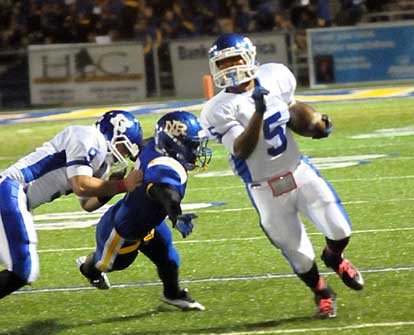 It just wasn’t their night, as it hasn’t been for any Bryant team in North Little Rock since 2004.

For example, the Hornets’ best drive was their first. After a nice kickoff return by Hayden Daniel, they drove to the North Little Rock 14. Quarterback Hayden Lessenberry scrambled for 8 yards then running back Karon Dismuke slashed for 12. Lessenberry also completed passes of 15 yards to Sawyer Nichols and 6 to Dillon Winfrey. But a third-down throw fell incomplete.

Though it was fourth down, the Hornets figured to get on the board with a field goal. Jace Denker came on to try a 31-yarder, the same distance as his game-winner the previous week against Cabot. He had enough distance but the kick hooked wide.

That was the first omen. Denker has not missed many this year.

The Hornets picked up two first downs on that opening drive. They would only muster two more the rest of the game.

In turn, the Bryant defense forced a three-and-out, keyed by Winfrey tackle on Cats’ quarterback Kaylon Cooper for a loss of 10.

Going into the game, the Hornets planned to try to make some hay on special teams. And, on the fourth-and-14 punt, they went after the block. Though it appeared they got a piece of Hasheem Abdelrahman’s kick, which sailed out of bounds at the North Little Rock 25. Apparently, however, the officials didn’t feel any of the Hornets’ touched the ball so when they unpended Abdelrahman, they hit Bryant with a roughing the kicker penalty. 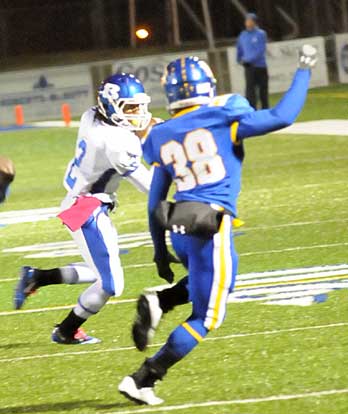 So, instead of have the ball 25 yards from a lead, the Hornets were back on defense.

Though North Little Rock drove into Bryant territory, a sack by Tyree Reese and a procedure penalty proved too much for the Cats to overcome. Abdelrahman came back in to punt.

The teams traded punts, in fact, until late in the first quarter. They then traded turnovers. Gary Vines had an interception for North Little Rock then Tim Kelly recovered a fumble for Bryant.

On the second play of the second quarter, Lessenberry, playing on a sore right ankle, dropped back to pass and got intense pressure. Trying to avoid the sack, the Bryant quarterback had the ball knocked out of his hand. Not just knocked to the ground, the ball rolled toward the end zone and North Little Rock’s Alex Gosser recovered at the 3.

To top that, the Wildcats got a big break when the Hornets defense crashed the first play from the 3. Tailback Juan Day was hit at the 5 and coughed up the football. But instead of it hitting the ground and staying put, it popped out, much like the fumble that got them to the 3. Instead of it costing the Wildcats, though, they came out smelling like the proverbial rose. Cooper retreated and not only recovered it, but scooped it up and headed for the corner of the end zone. Picking up a devastating peel-back block from tight end Cameron Williams on Reese, Cooper got there for the touchdown.

Bryant never really recovered from that. North Little Rock’s defense began to dominate the line of scrimmage, stifling the running game and getting pressure on Lessenberry with just its front four for the most part. Tight coverage on the Bryant receivers in the secondary, coupled with that pressure, made it difficult for the Hornets to get anything going. They would have seven possessions the rest of the game and five went three-and-out except the one on which North Little Rock’s Quncey Thomas made an interception.

The Cats took a 14-0 lead when tailback Kendall Williams broke a 36-yard touchdown run on his team’s next possession.

Thomas’ interception ended Bryant’s next possession. He returned it to the Hornets 27 and, from there, it took three plays to find paydirt. Williams’ second TD came from 7 yards out. 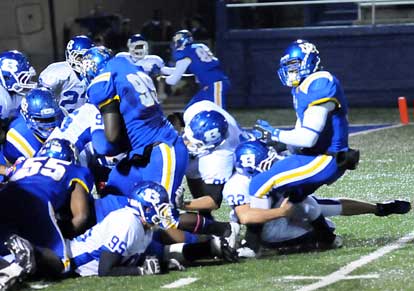 Lessenberry completed short passes on Bryant’s subsequent possession but, between them, he was sacked for a loss of 12 yards.

Ian Shuttleworth, who punted six times, kicked the Wildcats back to their own 43 and, with the help of a personal foul penalty, the Hornets defense forced a punt in return. Cooper’s quick kick pinned Bryant back to its own 17. Three plays later, Shuttleworth was punting from the 12.

With 2:09 left, North Little Rock got the ball back 49 yards away from adding to the lead. The Cats covered it in five plays, capped by Cooper’s throw on a short out-route to Jonathan Parks, who made a move to the outside and broke free for a 22-yard touchdown to make it 28-0 at the half.

To start the second half, North Little Rock drove 80 yards in nine running plays, starting with Williams’ 49-yard sprint. Cooper scored on a sneak from the 1.

Bryant’s lone first down of the second half came when the Wildcats roughed Shuttleworth on a punt after the Hornets lost 4 yards on its first three plays of the half. The Wildcats proceeded to stymie Bryant again and three plays later, Shuttleworth was punting again.

With the sportsmanship rule in effect in the fourth quarter, the Hornets ran just three plays with another punt.

Ever since the two high schools, Ole Main and Northeast, recombined in North Little Rock to form one of the largest schools in the state, football fans have expected them to become a powerhouse. They’ve had tremendous talent but never have broken through big or even consistently. Now the second largest school in the state, the Charging Wildcats (Chargers from Northeast, Wildcats from Ole Main) appear to have started to play up to their potential. Only time will tell but, if it’s so, the Hornets may have just been an early victim in their run of dominance.

Winfrey led the Hornets on defense with seven unassisted tackles plus the one for the loss. Reese finished with 6 tackles and a sack, while Powell had seven stops and a tackle for a loss. Travis Royal, Chris Stevens and Jesse Johnson each had a hand in six tackles.

In the meantime, the Hornets, now 7-2 on the season and 5-1 in conference play, have a bigger game ahead (against Central) and more to come (in the playoffs).