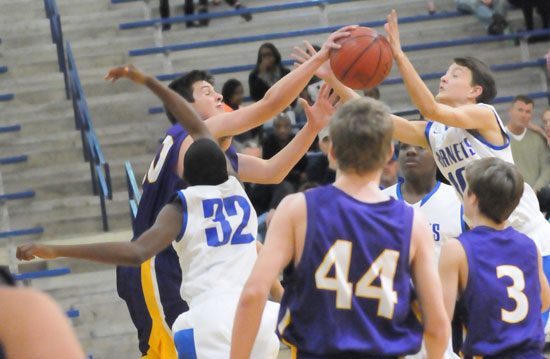 Opening blitz sets Hornets freshmen on the path to victory

It’s a testament of the depth of talent that the Bryant Hornets freshman team has that, when they opened up their game with the Little Rock Catholic Rockets on Monday night, six different players scored and 12 played during an 18-4 run. 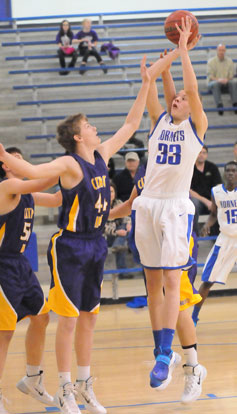 In the end, 10 guys had scored and 18 got into the game as the Hornets bounced back from a bitter 45-44 loss in overtime to the North Little Rock Junior Charging Wildcats last Thursday with a 52-37 victory over the Rockets.

Bryant takes a 7-3 record (with two of the losses by one point in OT) into the Christmas break. They’ll return to action at the annual Kameron Hale Invitational Tournament at Lake Hamilton on Friday, Dec. 27, at 1:45 p.m. They’ll be taking on Malvern.

Caylin Allen knocked down a trio of 3-pointers on his way to a team-high 11 points. Twin brother Calvin Allen added 10 with Marvin Moody, Kaleb Turner and Landon Kays pitching in with 6 each. Jonathan Allen and Hunter Handly scored 4 apiece with John Winston contributing 3, Trey Ashmore 2.

The teams played nearly even after Bryant’s opening salvo. Catholic brought in a bigger lineup that helped even things up. Jack Mathis scored 12 points and Duncan Diaz 10. Josh Neuman finished with 7 to go with a game-high seven rebounds. None of the three started.

Hornets head coach Tyler Posey indicated he’s looking for more consistency from his team, dismissing the fact that he’s trying to find playing time for so many quality players.

“We just can’t seem to put it together all four quarters,” he commented. “We had a good first quarter and stretches here and there that really looked like we had turned the corner then we’d go back to playing kind of a little sloppy. We didn’t get a lot of production.

“But, overall, I think we’re getting better,” he asserted. “We’ve still got a ways to go.” 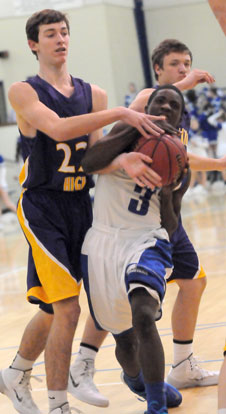 Calvin Allen (3) fights his way to the basket while being fouled by Catholic’s John David Falcon (22). (Photo by Kevin Nagle)

Once the Hornets had established a double-digit lead initially, the Rockets were able to trim it to 9 with a third-quarter push.

Moody came through with a three-point play only to have Diaz counter with a three-point play to make it 33-24 with 1:55 left in the third. Moody hit a 12-foot jumper and, after a Rockets miss, Calvin Allen drove to the rack and was fouled. He converted both free throws and, moments later, Kays hit the offensive glass for a bucket to stretch the lead to 39-26. Catholic never got that close again.

“Landon Kays came in and cleaned up the boards and got some good putbacks,” Posey acknowledged. “I really thought he provided a really good spark for us inside. Caylin Allen put in some big shots and Calvin played his game. He’s a really good player.”

The largest lead for the Hornets came early in the fourth quarter initially. Kays got another stick-back and, after Mathis answered, Caylin Allen drained his third triple to make it 44-28.

Thomas Olaimey scored Catholic’s first points at the 2:18 mark but that was answered by the Hornets when Moody made a nice pass inside to Winston who completed a three-point play.

That got Bryant going again. Kays got his first basket off a nice feed from Caylin Allen and Turner drove for a layup after making a steal to push it to 14-2.

Justin Hineman interrupted with a basket inside for the Rockets but with time running out, Calvin Allen’s 12-footer rimmed out only to have Handly leap for the rebounds and get off a shot before he came down. It nestled into the cords and the lead was 16-4 at the first break. 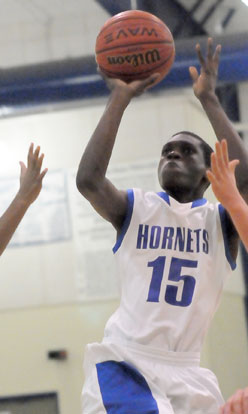 Turner then capped off the run with a driving jumper to start the second quarter, making it 18-4.

A three-point play by Conner Breau sparked the Rockets. Handly answered with a baseline jay but Mathis cut it to 20-11.

After being hit with an offensive foul on the Hornets’ next possession, Caylin Allen spotted up for kick-out feeds from his brother Calvin on consecutive trips. He cashed in with back-to-back triples as the lead ballooned back to 15.

Bryant led 28-15 at the half and when Calvin Allen canned a running jumper to start the third quarter, the  sparked the Rockets. Handly answered with a baseline jay but Mathis cut it to 20-11.

After being hit with an offensive foul on the Hornets’ next possession, Caylin Allen spotted up for kick-out feeds from his brother Calvin on consecutive trips. He cashed in with back-to-back triples as the lead ballooned back to 15.

Bryant led 28-15 at the half and when Calvin Allen canned a running jumper to start the third quarter, the Hornets had doubled up the Rockets, 30-15.

Mathis scored and was fouled at the 4:16 mark. He missed the free throw but Neuman got to the rebound and made it a 4-point trip for the Catholic.

After a Bryant turnover, Posey called timeout but, when play resumed, Mathis hit a layup to make it 30-21.

Down the stretch, the Rockets cut it to 46-35 and had two chances to get it back under 10 only to come up empty. Calvin Allen’s drive for a hoop and Caylin Allens basket off a feed from Brandon Harris pushed it back to 15.

Mathis scored one last time and, with the Hornets’ third quintet in the game, Quentin Nimmer made a steal, got it to Jamale Slater who fed Ashmore for a layup, setting the final score. 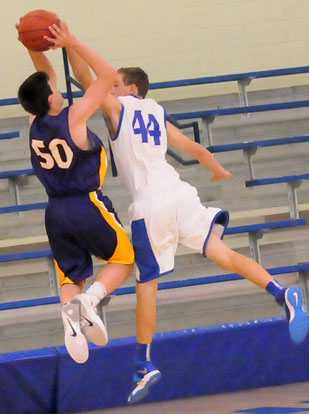 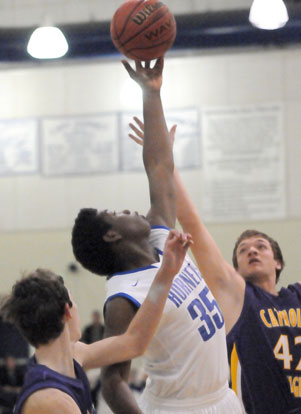