The 84 chairs set up in the Bryant Fire Department’s meeting room were not enough to accommodate the estimated 150 citizens who crowded in and stood outside the room Monday, Aug. 31. The group gathered to listen to information and ask questions regarding a road extension project they were concerned about.

Mayor Larry Mitchell, State Senator Shane Broadway, several City Council members and other city officials and a representative from Metroplan (an organization that helps plan for growth within Central Arkansas) were in attendance.

The project of concern was one of several options being looked at by the city to connect the new Saline County Airport with the I-30 access road. The option with which the group was most concerned would involve an extension of Raymar Road, which some citizens have said would have a negative impact on their neighborhoods. Several citizens had been expressing their concerns to the city council and mayor.[more] 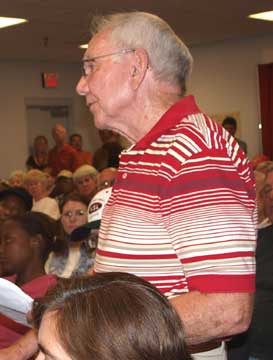 Mitchell addressed the group and told them he had wanted to hold the meeting to straighten out some facts. He said some of the information circulating about the proposed project was not true.

Mitchell began by explaining the city had approximately doubled in size since the 1990’s and would probably do so again. He said the 20/20 group set up by the Chamber of Commerce had surveyed citizens and found one of the things they saw a need for in Bryant was better connector streets.

Mitchell said the city government was trying to do long-range planning. He expressed concern about safety in some neighborhoods where roads were becoming overcrowded with traffic to the point that it was difficult to pull out of a driveway. After explaining the reason the city was looking into different road expansion projects, Mitchell stressed they were still in the early planning stages.

“There is no plan set yet,” said Mitchell.

He said Jacobs Engineering, chosen by the city council at its meeting on Aug. 13, was looking at routing, environmental factors and cost and would present its ideas to the City Council before anything was voted on.

“We don’t have any routes set … we have not purchased any right of ways,” said Mitchell.

Broadway took the floor and spoke about one of the reasons an alternate route to the airport was being considered.

Showing an aerial view of the airport area on a projection screen, Broadway pointed out the placement of the airport and the area around it that was open to commercial development. He said he and other members of the Saline County Economic Development Corporation were trying to attract industries to the airport area.

According to Broadway, there had been a few interested companies, but none of them had committed to coming to Bryant at that time. He said some of those interested would employ anywhere from 100 to 1,500 people. He said he believed the property was very marketable, but there was one thing all of the companies had asked him, if there was another point of access to the airport.

While talking about industry coming into the airport area, Broadway mentioned the companies would need a good road to bring products in and out of the area on 18-wheelers. At the mention of 18-wheelers, mumbling and whispering could be heard throughout the crowd.

Broadway went on to explain there was more than one option being considered. “I don’t want to do anything to disturb your way of life,” he said.

After discussing other options to provide access to the airport and some of the opportunities and ideas he had for bringing new industry to the airport area, Broadway turned the meeting back over to Mitchell.

Mitchell said he and the City Council were, “trying to plan for the future of Bryant.”

A citizen in the crowd asked what the time frame was to complete the proposed projects.

“There is no time frame and no money set aside yet,” answered Mitchell.

Many in attendance had questions for Mitchell. Some questions were asked about the expansion of the airport itself. Mitchell deferred to the Saline County Airport for those, stating that the city of Bryant did not make decisions about the airport.

Many questions were raised and comments made about how the route would affect different aspects of residents in the subdivisions around the proposed route. Mitchell continued to restate that many proposed routes were being looked at by the engineering company and nothing had been voted on by the city council.

Jim Shuffield of Johnswood Road addressed Mitchell and council members. He held a letter, which discussed some of the concerns of some of the residents on Johnswood Road. He said the road had already become a thoroughfare. He said often cities choose a route in cases like this because it seems to be the most efficient.

Shuffield seemed to believe that might be a mistake in this case. “To produce an efficient project will upset many people who have moved to Bryant for the peace and tranquility,” he said.

The crowd erupted in applause at this statement.

Shuffield went on to talk about the cost of such a project including the expense of purchasing a right of way in some areas. He said the money would have to come from some source, possibly taxes or federal funds.

Shuffield also said, from what had already been presented, that the intent of the city seemed to be to make a full investigation before making a decision.

The Mayor responded that he wanted to be open about what was going on, or they wouldn’t have had the meeting. He said he wanted everyone to be informed.He also responded to the idea of a new tax by saying, “Taxes, not for me.” He said the three-cent sales tax already implemented in Bryant was enough.

Shuffield said he appreciated the meeting being called.

Judy Standfell asked how long the proposed extension of Raymar Road had been on the Metroplan list. She also wanted to know if that route was the only one that had been given to Jacobs Engineering for consideration as access to the airport.

Mitchell said the project had been on the Metroplan list since 2007 and that five routes had been given to the engineering company for consideration.

Standfell also wanted to know if the Raymar Road route had been given a higher priority.

Other concerns expressed by citizens included increased noise pollution, effects on Mills Park and the ball fields on Shobe Road, the cost of the project and the impact it might have on property values.

Over the course of the meeting, Mitchell stated he understood what the concerns were. He wanted people to know nothing had been voted on or decided yet. He also reiterated he wanted the people to be informed about what was going on.

“This isn’t going to happen today, tomorrow, next week, or next year,” said Mitchell. He commented he wanted everyone to work together to find the best solution.

Some citizens responded to those who were expressing their concerns by saying the town was growing because it was a great place to live and something needed to be done to add some main roads to relieve traffic.

Frank Chandler of Neal Street said he has had to sometimes sit in his driveway 15 minutes before being able to pull into the street. He said Bryant only had one main road and indicated this was causing too much traffic on too few roads.

Chandler also wanted to inform people that a lot of the decision would come down to what the Arkansas Department of Environmental Quality (ADEQ) would allow.

On the subject of adding companies to the airport area, Chandler reminded people that there was a time when not everyone commuted to work because a lot of people had jobs at Alcoa or Reynolds in the area.

Because of the open forum format, some people came to the meeting to be heard on other issues, including the ongoing projects in place to solve some flooding problems in the area.

Mitchell said he knew the city was not finished with this, but it was still pursuing the problem. In some cases, he indicated they were waiting on approval from the ADEQ or other agency before moving forward. He also said money continued to be an issue in this matter due to the fact that they could only use monies from the general revenue fund because, at this point, Bryant did not have a separate fund for storm water or watershed issues.

Overall, the atmosphere at the meeting was peaceful and orderly.