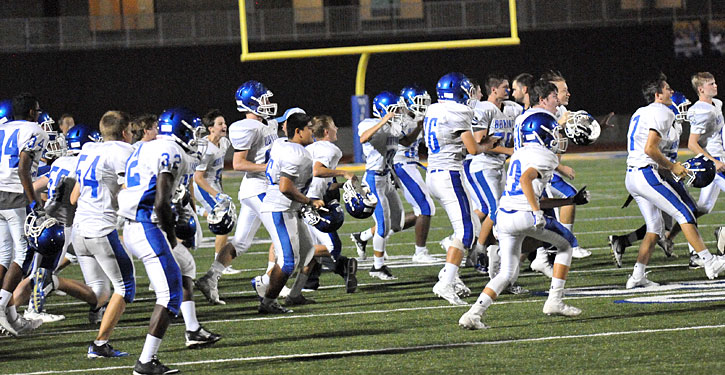 Overtime belongs to freshman Hornets in wild win at NLR 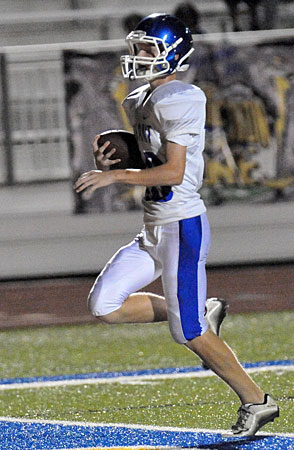 Gage Stark steps into the end zone to complete a 36-yard touchdown pass play just before the half. (Photo by Kevin Nagle)

NORTH LITTLE ROCK — In a game in which there were big plays from the offenses, from the defenses and on special teams, the freshman teams from Bryant and North Little Rock rocked and rolled into overtime at Charging Wildcat Stadium Thursday night.

Tied 26-26, the Hornets gave themselves a chance to win in regulation with a drive to the North Little Rock 13 in the closing seconds. Grayson Scoles came on to attempt a game-winning 29-yard field goal and he had plenty of leg. The kick sailed outside the left upright no good and the extra period ensued.

On Bryant’s try from the 10, Ahmad Adams picked up 3 yards then quarterback Jake Meaders picked up 3. Another 3-yard surge by Adams set up a fourth-down at the 1. After a timeout, the Hornets’ offensive line cleared some room and Adams charged into the end zone.

But, as in high school and college football, both teams get a shot. The Wildcats set up their offense at the 10 to start their response. But, on first down, Bryant’s Tye Johnson and Catrell Wallace broke through and hit running back Brandon Thomas just as he took the handoff in the deep I set. The ball came loose and Bryant’s Austin Bailey pounced on it to seal the Hornets’ victory.

“We were just in a base defense right there,” said Hornets coach Kenny Horn. “We basically did to them what they did to us a couple of times. When we’d go away from their defense, they would slant underneath us and they were just quick enough to get in the backfield. Right there, they went away from us and our guys were quick enough to get in there, cause a little bit of confusion and we were just lucky to get the football there. 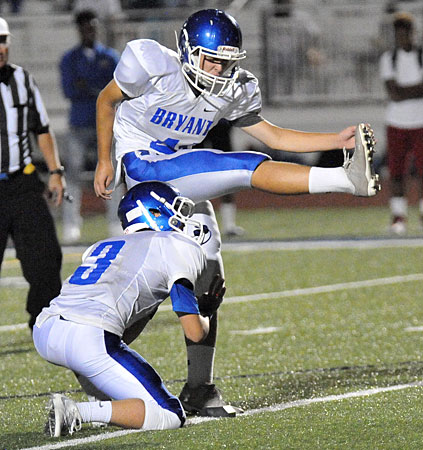 Grayson Scoles boots an extra point out of the hold of Jaeger Burks to set the final score in overtime. (Photo by Kevin Nagle)

It was the first overtime for the freshman Hornets since 21-20 loss to Conway White in 2001.

Both teams came into the contest undefeated on the season. Bryant improves to 4-0 overall and 3-0 in the Central Arkansas Junior High Conference going into next week’s game at home against Conway Blue.

The last play was not the only highlight for the Bryant defense, which held North Little Rock to a net of just 2 yards of total offense in the second half. But the Wildcats’ defense scored a touchdown and set up a 1-yard run for another as they drew even.

After the latter touchdown, the Cats had a chance to take the lead with 2:25 left. But their 2-point conversion try was denied.

“That was a good junior high football game,” declared Kenny Horn. “It was probably one of the best ones I’ve been a part of. 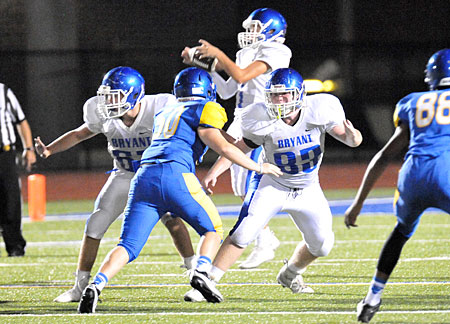 “We had to overcome a little adversity — quite a bit of adversity — and we responded,” he noted. “For a minute there, we kind of got down, but stopping the two-point conversion to keep it tied was big. I think driving down the field and giving ourselves a chance to win with a field goal gave us a lot of confidence.”

That march was aided by a pass interference penalty against North Little Rock that converted a third-and-6 near midfield, a call that the Wildcats’ coach was still protesting after the game, claiming that it was an uncatchable ball.

Two plays later, the Hornets faced a third-and-10 at the Cats’ 40. A splendid completion from Meaders to Gavin Wells converted and reached the 23. Adams picked up 5 and centered the ball at the 18 before the Hornets called timeout with 0:02 showing on the clock.

When they lined up for the field goal, a hard count got North Little Rock to jump offsides, moving the Hornets 5 yards closer for Scoles try. 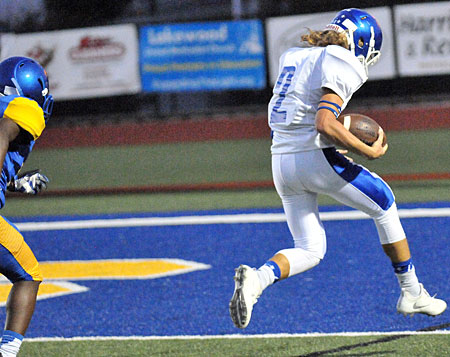 “The good thing is, the Bryant Hornets came out on top,” Horn stated. “I thought for the most part, we executed well. We had some mental lapses up front but we executed when we needed to.

Bryant built a 26-12 lead by halftime. On the first play of the third quarter, safety Darrick Rose tackled North Little Rock runner Abram Terry at the boundary and just snatched the ball out of his hands.

So Bryant was just 41 yards away from blowing the game up, taking a three-score lead. A loss on first down set them back but Meaders found Wallace for 9 yards. On third down, however, the Wildcats ripped the ball from Adams and linebacker Brandon Thomas scooped and scored, totally turning the momentum. 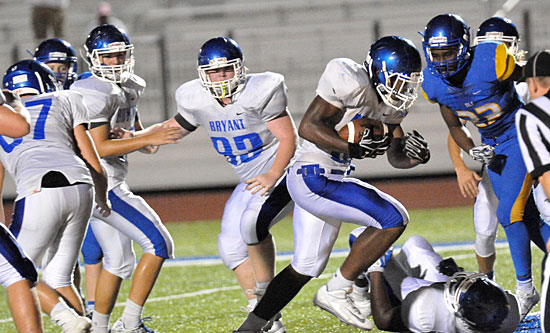 Ahmad Adams powers in for the winning touchdown in overtime. (Photo by Kevin Nagle)

Thomas McCauley ran in the two-point conversion and Bryant’s lead was just 26-20 with 5:53 left in the third quarter.

The Hornets went three-and-out so North Little Rock got the ball back with a chance to tie or take the lead. The Bryant defense rose up, however. After the Wildcats picked up a first down on a pair of runs by Thomas, they tried to throw. But Peyton Dillon met David Shifflet at the quarterback, sacking Josh Beck for a 9-yard loss.

A play later, Beck tried to go deep down the left sideline only to have Bryant’s William Boyd nearly pick it off.

Punted back to their own 8, the Hornets went three-and-out as the fourth quarter got underway. As a result, North Little Rock got another shot, this time just 30 yards away from scoring.

But four plays later, the Wildcats turned it over on downs a yard behind where they’d taken over. 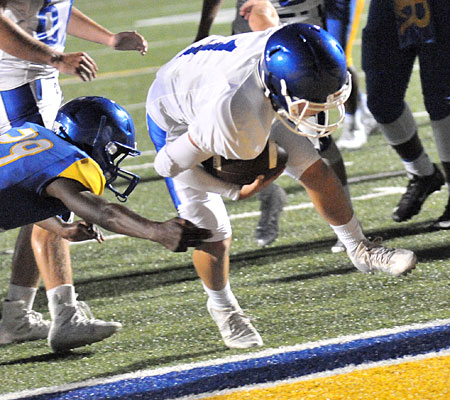 In response, the Hornets appeared to have a big third-down conversion when Meaders and Wells hooked up for 17-yard gain. But a holding penalty set them back and, on the next play, Devion Larff intercepted and returned the ball to the Bryant 1 where Meaders knocked him out of bounds.

That gave the defense a chance at a stand but Sam Looney sneaked in from there to tie it.

The Cats tried to get Brandon Thomas free on the two-point conversion but Rose, Johnson and Christian Cain hauled him down for a loss.

“We talked about it at halftime, secure the football,” Horn said. “Let’s go out and finish the game out. We just didn’t. We had a couple of mental lapses. We didn’t take care of the football. Last week, we got away with it. This week, we still got away with it but it almost cost us.

“But credit to our kids for overcoming it and sticking with it,” he concluded.

The game started with Adams returning the opening kickoff for 83 yards and a touchdown, setting the tone.

After North Little Rock had to punt thanks to a third-down stop by Rose and Boyd, the Hornets added on. Their third play of the next series put up points as Wells won a jump ball on a Meaders pass down the right side. Wells not only came down with it, he kept his feet and glided down the sideline for the TD. The 51-yard completion made it 12-0.

It didn’t take North Little Rock long after that to answer. A play into the next series, Tyrone Waters got to the corner and sprinted 65 yards to paydirt.

Unfazed, the Hornets scored again, gashing the Wildcats on the ground initially. Adams had runs for 12, 11 and 22 yards.

When the Hornets had reached the 19, they faced a third-and-8. Meaders tossed a 10-yard pass to Jaeger Burks to keep the drive alive. A 5-yard completion to Wallace reached the 2 and, from there, Meaders kept for the touchdown to make it 18-6.

And it looked like they might get it back when the Wildcats found themselves in a third-and-12 situation from their own 48. Looney faked two handoffs on the play then delivered a deep pass to Devion Larff down the middle for a 52-yard touchdown.

With 2:13 left in the half, the Hornets started at their own 24. On second down, Gage Stark got behind the North Little Rock secondary and Meaders found him. But Stark, ready to run to the end zone, was unable to haul it in.

He would, however, get another shot at it.

A pass interference penalty on a third down throw gave the Hornets a lift. On the next snap, it was Meaders-to-Wells for 24 yards.

Two plays later, Bryant faced a third-and-9. Meaders rolled right and there was Stark again behind everyone. This time, he made the catch and sprinted in for a 36-yard touchdown play. It was Meaders’ second TD pass of the night. For the game, he was 10 of 17 for 161 yards.

Adams ran in the conversion to make it 26-12 with just 51 seconds left in the half. 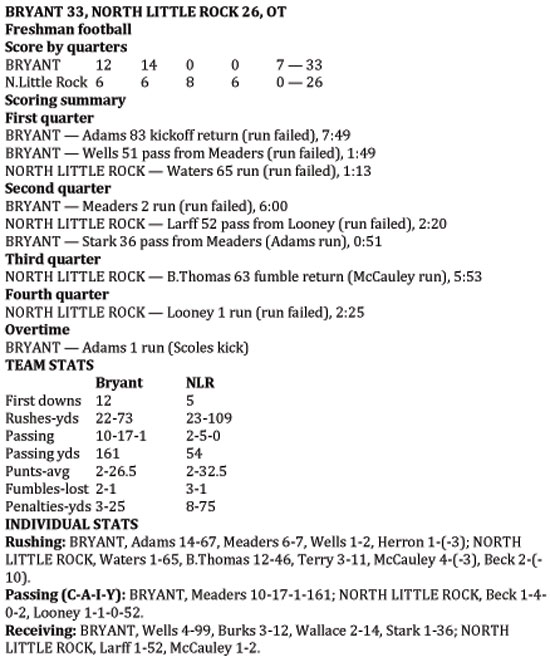