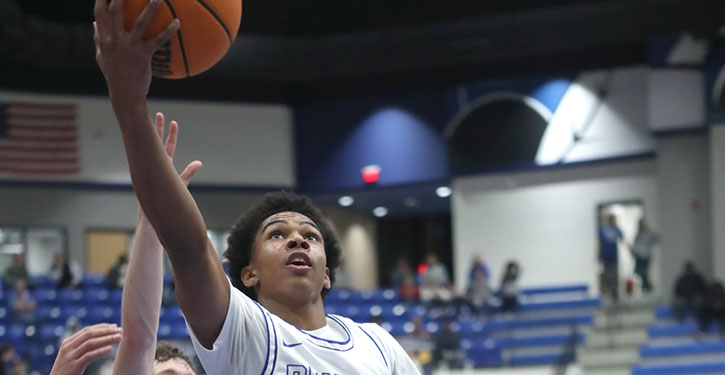 Senior Treylon Payne pumped in 26 points to lead the Bryant Hornets as they snapped a rugged three-game conference losing streak by stunning the defending 6A State champion Fort Smith Northside, 67-44, at Hornet Arena on Friday night.

Bryant had led in all three of the recent setbacks including a double-overtime loss to top-ranked North Little Rock. This time, they claimed the lead early and never relinquished the advantage as they avenged a 60-50 loss at Northside on Jan. 10.

The Hornets held Grizzlies’ 6-10 star Jaylin Williams, a University of Arkansas signee to just 14 points and nine rebounds, after he scored 27 in the previous meeting. Williams wound up fouling out with 3:10 left in the game.

“We tried to just make it hard on Williams and tried to be real aggressive on offense, attacking on offense,” noted Hornets head coach Mike Abrahamson. “Officiating plays a part. It was tightly officiated tonight, so we had to adjust to that real quick or we were going to be in trouble. There’s nothing wrong with that. The crew was good, and they were consistent.”

It was actually Bryant that got into early foul trouble as both posts Will Diggins and Catrell Wallace picked up two quick fouls trying to defend Williams.

“Sometimes games are officiated differently,” Abrahamson said. “It’s human. It’s something we don’t know from game to game, so you have to adjust.

“We did want to be aggressive,” he reiterated. “We wanted to get into the lane and drive it, and we were able to do that.”

In fact, the Hornets adjusted better than the Grizzlies. They got to the line for a 19 of 29 performance. Northside was 9 of 11 and had Garrett Keller, a starting guard, foul out as well as Williams.

“It’s good for us,” Abrahamson said of the league victory. “We just want to continue the process of being the best that we can be. And I give these kids credit because we’ve had a lot of adversity this year, a lot of things thrown our way. But we’ve faced all of it and these kids keep coming back. They keep buying in. They keep trying to head in the right direction. Everything that comes our way, we just try to face it and keep going. And I think tonight is a product of that. We’ve got good kids.”

The Hornets jumped on Grizzlies early, piling up a 13-2 lead that included a pair of 3’s by Payne but started with three free throws by Diggins, one of three sophomores in the starting lineup for the Hornets. Those free throws were the result of the first fouls on Williams and 6-6 forward Braylin McKinley.

In between, McKinley scored on a jump hook for Northside’s only points in the first four minutes of the opening period. After Payne’s triples, with a steal in between, Wallace scored off the offensive glass leading to a Northside timeout.

“Treylon’s a tough kid,” said Abrahamson. “He’s a really good player. We think he’s a Division I player. He’s going to end up somewhere good. He puts a lot of time into this game and he gets a lot out of this game because of that. We rely on him heavily and he gives us everything he’s got. We love him. He’s just awesome, a solid all-around player.”

Williams’ first bucket came after the return from the timeout. Moments later, however, he picked up his second foul as Wallace took a charge. But Williams stayed in the game and knocked down a 3. A driving jumper by Jacob Joe had the Griz within 13-9 in the final minute of the period. But a three-point play by Payne on a drive to the rack had the Hornets up by 7.

It was 19-13 going into the final five minutes of the half. Wallace rebounded a missed free throw by Khasen Robinson and scored, which started a 13-4 push by the Hornets to end the half.

Robinson added two free throws as the Grizzlies continued to foul. Wallace made a steal that led to a basket by Landyn Newburn, another sophomore, who made his first varsity start. It was marked by solid defense against Joe, the younger brother of UA star Isaiah Joe, who ended up with just 4 points in the game.

Keller’s basket trimmed Bryant’s lead to 10 but Aidan Adams splashed a 3 and Payne made a steal that led to a trip to the line where he converted once, making it 30-15.

Northside’s Noah Gordon and Payne traded hoops in the final minute and the Hornets led by 15 going into the break.

Abrahamson used five guards for a while, hoping to draw Williams and/or McKinley out from under the basket on defense.

“We wanted to see if he’d come out and he didn’t really play along with us,” Abrahamson said. “But we just stuck to our plan.”

Northside cut the margin to 12 early in the third quarter but Payne and Robinson each had 3’s around a basket by Joe. Camren Hunter fed Payne for a basket as the lead grew to 42-24.

The Hornets continued to answer every Northside threat at a run. It was 44-28 after a Williams basket with 2:25 left in the third. The Griz had a chance to get closer but Robinson made a steal that led to a basket by Hunter off an inbounds play with Williams on the bench with three fouls.

He returned but Hunter got the line after grabbing an offensive rebound. He converted twice. A.J. Jenkins followed with a steal and a drove for a basket by make it 50-28.

The Hornets forced 18 turnovers, while committing only 10. Northside had the rebounding advantage but by only five, 30-25.

“Our defense,” Abrahamson said when asked about the difference in the game. “But, you know, we scored too. We haven’t scored more than like 52 against them in three years. So, to score in the 60’s tonight — that’s a big deal.

To start the fourth quarter, the Grizzlies whittled 7 points off that 22-point lead. It was 50-35 when Abrahamson called a timeout at the 6:12 mark.

When play resumed, the Hornets turned it over only to have Robinson set up and take a charge on Williams, who played on with four fouls. He had to refrain from challenging Wallace inside as he scored to help get the Hornets back on track.

A layup by Payne had the margin back to 19. Jenkins added two free throws after Williams missed the front end of a one-and-on. The lead was back over 20 with 5:04 to play.

The Hornets were 7 of 10 at the line down the stretch.

With a 63-39 lead and 2:19 left, Abrahamson turned to his reserves. O.J. Newburn drove for a basket after that and his younger brother Landyn converted two free throws.

The Hornets will travel to Little Rock Catholic on Tuesday.