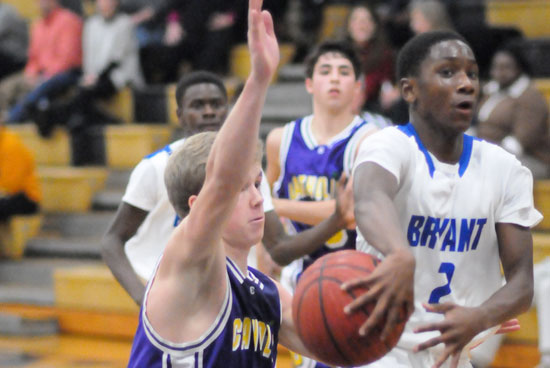 NORTH LITTLE ROCK — After a frustrating first half, the Bryant Hornets found themselves trailing the Catholic Rockets of Little Rock 39-31 after Lance Harville-Thomas converted a three-point play to start the third quarter. 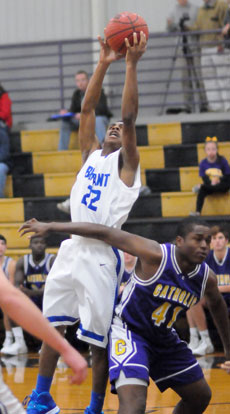 Romen Martin (22) goes high for one of his four offensive rebounds as Catholic’s Daniel Nwachuku tries to block out. (Photo by Kevin Nagle)

But the team just came at the bigger, brawnier Rockets even harder. They wound up putting together a 26-8 blitz that turned the tables. Though they saw the resulting 57-47 lead whittled to 2 down the stretch, they held on for a 70-67 win to open the OrthoArkansas/Baptist Health Invitational Tournament at Central Arkansas Christian Academy. Threatening weather forced the cancellation of the rest of the tournament, but the Hornets had their first win of the season.

Grayson Giles pumped in 23 points and C.J. Rainey added 18 for Bryant. Freshman Romen Martin, getting his first varsity start, added 10 with sophomore Kevin Hunt coming through with 8 points all in the second half.

“It wasn’t pretty and it was far from perfect,” Abrahamson commented. “It was far from even very good but it was good enough to win today, which hopefully boosts our spirits especially under the circumstances.

“I’m just really proud of them for their character tonight,” he emphasized. “There was no lack of effort. You know, you can coach a lot of things but the best thing is to coach good kids.”

In the first half, the Hornets forced just four Rockets turnovers but, by scrambling aggressively on defense in the second half despite foul trouble, they forced 14 more to help fuel their game-changing surge.

“We picked up more full-court type of pressure and sprinkled in some half-court stuff as well,” Abrahamson related. “We just thought if we ran around enough maybe we’d get them to throw it away. Of course, I was concerned about fouling but we are who we are and we have to stick to that. We just tried to adjust. I just wanted the kids to go out and not worry about any external factors and try to go be us. 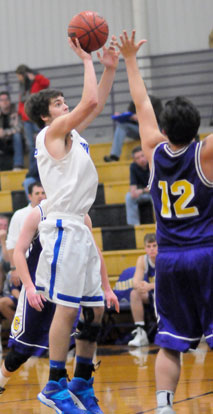 “We tried to keep pressuring,” he continued. “We tried to adjust to the officiating, just tried to keep being us, switching up defenses and applying pressure, trying to keep playing hard, playing with energy, staying mentally into it, doing our assignments and doing what we practice. And eventually, that won out.”

The turning point for the Hornets may have been a buzzer-beating 3 by Rainey to end the first half and cut into Catholic’s 36-28 lead. After Harville-Thomas’ play to start the second half, Martin got to the line and converted twice to resume the Hornets’ onslaught.

They were further ignited by forcing a 10-second violation as the Rockets failed to get across midcourt against the press. Martin made the most of that with a 3 and it was suddenly just a 39-36 deficit.

A stickback by Harville-Thomas off a missed free throw by 6-6 Zach Morris (21 points, 13 rebounds) interrupted but Hunt stepped up with a trey to cut it to 2. William Hancock (12 points) hit two free throws but Hunt countered with an old-fashioned three-point play at the rack.

Catholic took a timeout with 5:15 left in the third quarter, leading just 43-42.

And when play resumed, the Hornets forced another turnover that Cedarrian Crosby, who had been limited by foul trouble in the first half, cashed in, giving Bryant its first lead since midway through the second quarter.

It became a scramble for a while after that as both teams missed opportunities. Two of Bryant’s came on steals, one by Hunt, another by Giles. A third Rockets’ turnover resulted in a sparkling wrap-around pass from freshman Desmond Duckworth to Rainey for a layup and a 46-43 edge.

Morris countered for the Rockets but Giles added back-to-back hoops. When Catholic’s Matthew Cronin cut it to 50-47 with 2:22 left, the Rockets got a timeout. But it only served to revitalize the Hornets. Giles planted a 3-ball when play resumed then absorbed a charge on Morris, who slammed the ball to the floor and was T’ed up. Rainey hit both technical free throws and, though an illegal screen cost the Hornets on the subsequent possession, they proceeded to force a Catholic turnover that led to a layup for Rainey and the 57-47 lead with a minute left in the third quarter. 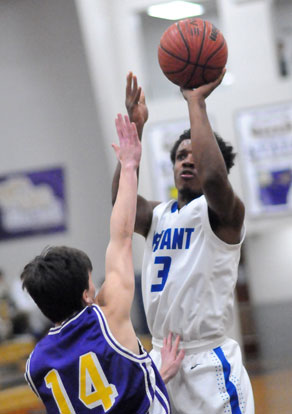 A layup by Hancock made it an 8-point game going into the fourth quarter. Morris then scored inside to start the fourth and the Rockets had a chance to trim the 57-51 lead further only to have Rainey made a steal that led to a basket by Hunt off another free from Duckworth.

At that point, the Rockets started to find their way through the pressure while the Hornets began to struggle. With 5:17 left and leading 59-55, Abrahamson called a timeout and put his team in a spread offense. But, with 4:39 left, Catholic’s Sam Greenwood (11 points) hit a pair of free throws to make it 59-57.

Now, in the first half, Morris had been credited with a free throw he didn’t make. With 4:09 left, Duckworth went to the line for Bryant with a one-and-one. He missed it but, even though he obviously didn’t get a second shot, the Hornets were awarded a point. So it was 60-57 when it should’ve been 59-56.

Fortunately, it didn’t come down to 1 point one way or the other but it might’ve been a tighter fit down the stretch as the teams began to trade free throws. With 3:11 left, Giles hit the front end of a one-and-one (really) and, when he missed the second, somehow Duckworth latched onto the rebound after it was deflected away from Morris by Crosby. Duckworth scored to push the lead to 63-58.

Ricky Buchanan took a charge at the other end for the Hornets and Duckworth added a pair of free throws. 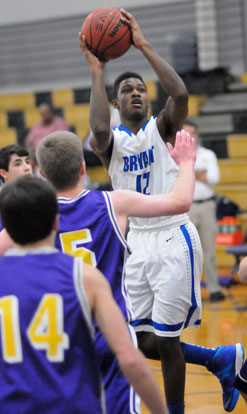 Bryant’s Cedarrian Crosby (12) twists to get a shot up over Catholic’s William Hancock (5). (Photo by Kevin Nagle)

Greenwood converted twice for the Rockets with 1:31 left and Rainey countered.

With :46.8 to go, Greenwood hit a free throw then Morris hauled down the missed second shot and scored to make it 67-63.

In turn, however, Giles missed a pair at the line only to have Crosby rebound, get fouled and convert twice to make it 69-63, out of the Rockets’ reach going into the final 20 seconds.

The Hornets had opened the game with a 7-0 run and behind Giles’ 13-point quarter, they took a 21-17 advantage into the second stanza. A buzzer-beating jumper by Caleb Strain set that score after Catholic had cut the lead to 2.

During that late Rockets’ surge, Crosby thought he’d set up for a charge but was called for his second foul. He hopped up in disappointment but his reaction was misinterpreted as a protest and he was given a technical foul.

Three times during the first half, Bryant had baskets wiped away by traveling violations that Abrahamson protested vehemently. Two of those hoops were 3’s.

Martin hit a 3 that counted with 4:22 left to put the Hornets up 24-23 but Catholic surged to the 36-28 lead in the final minute before Rainey’s last-second triple.

With the rest of the tournament cancelled, the Hornets are set to return to action on Tuesday when they play the host team in the Bank of the Ozarks/John Stanton Invitational tourney in Conway. Tipoff is set for 8:30 p.m.