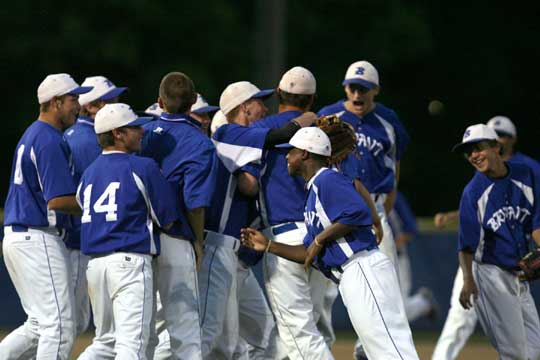 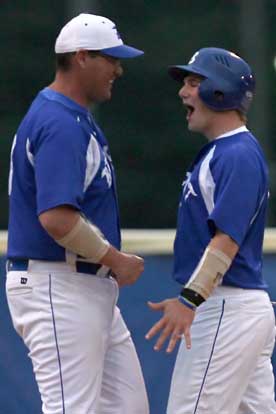 He said he was just looking to hit the ball.

And did he ever.

On a 1-2 delivery from Moore, Butler belted a shot that sailed beyond Van Buren right fielder Brant Ramsey and went to the fence. Marcus Wilson, who was running for Chris Joiner, and Brennan Bullock flew around the bases after starting at second and first, respectively. Both scored as Butler rolled into third with a triple that gave the Hornets a 2-1 lead over Moore and the 7A-Central Conference-leading Pointers.

And senior right-hander Ben Wells, in perhaps his finest performance as a Hornet, closed the door in the top of the seventh as Bryant won its second game in a row in dramatic fashion Monday night.[more]

“It’s a quality win,” declared Hornets head coach Kirk Bock. “At this stage, all of them are quality but Van Buren’s a good baseball team.”

Reminded that his team’s six-game conference losing streak began at Van Buren on April 1, the coach said, “This is where it started and this is where it’s going to end. We’re fixing to play as hard as we’ve ever played. I can’t say we’re going to win every game but we think we can.”

Bryant improved to 18-8 overall and 4-6 in league play with the rest of the league set to play Tuesday. Van Buren dropped to 12-9 and 6-4 as all eight teams in the conference enter the final two weeks of the season two games apart from top to bottom.

“You know, after losing six conference games in a row, you’re just trying to get some momentum back,” Wells said. “After a big win over Catholic (on Saturday) then having a comeback win like this especially against a good pitcher, it’s just huge for us. It boosts everybody’s confidence.”

Moore, who has signed to pitch for the Arkansas Razorbacks next year, came into the game having allowed just four earned runs in five conference outings this season for the Pointers. The Hornets reached him for two on six hits. He walked one, hit one and fanned six. 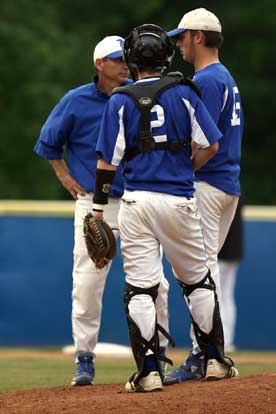 Asked if he thought about matching Moore, Wells said, “A little bit because I knew he was going to come out and throw hard. But, once the game started, I was really concentrating on locating pitches and getting people out.”

And did he ever.

Wells allowed four hits, all before the first out of the second inning. He struck out 12 and walking just one. After surrendering a single in the top of the second, he retired 17 of the last 18 batters. At one point, he fanned eight Pointers in a row before hitting a batter with one out in the sixth. The final five were retired after that.

A little defense didn’t “Hurt” either.

Just moments after coming in as a late defensive sub at second — on the first pitch of the seventh inning, in fact — sophomore Ozzie Hurt ranged behind second base to flag down a sharp bouncer up the middle and fired a strike to Butler at first to nip Allen King for the first out of the inning. Wells responded by striking out Garrett Hightower on three pitches and getting Logan Meadors to bounce back to the mound to end the game.

Bock said of the defensive move, “Fish (assistant coach Frank Fisher) came and reminded me, saying, ‘We need to get as good as we possibly can defensively, right?’ I said, ‘We are.’ Then I said, ‘No. Ozzie.’ Not taking anything away from Chris (Joiner, the starting second sacker) but Ozzie is the best glove that we have. I slid him out there late. I said, ‘Can you make every play that comes to you?’ And he said, ‘Yeah.’ And he did it. It was a great play.

“And Ben just did a great job,” Bock added.

Van Buren took a 1-0 lead in the opening inning. With one out, Paul Schneider singled to left. With two down, Tyler Spoon lined a single to right. King followed with a base hit to right. It appeared that Schneider would be held at third but when the ball was over-run by Caleb Garrett in right, he scored.

A pitch later, Wells picked off King to end the inning.

Garrett would make up for the miscue. In the top of the second, Van Buren DH Garrett Hightower drew a lead-off walk. Logan Meadors followed with a single to right. Hightower made the turn at second and headed to third but Garrett fired a strike to Tyler Brown who had the ball waiting for the base-runner, tagging him out.

That was the last Van Buren hit of the game but, with Meadors at second, Parker Johnson made a bid for an RBI hit only to have his liner plucked out of the air by Butler at first to end the inning.

“In that first inning I was falling behind in the count a little bit then I’d leave one up,” Wells related. “They’ve got some good hitters, especially at the top of the lineup and they were making good contact with it. In the second inning, I started locating everything, leaving the fastball down in the zone and they didn’t hit anything after that. 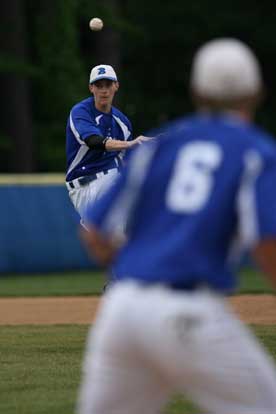 “They were kind of sitting on the first-pitch fastball so, in the second inning, we changed our approach and started people with sliders and off-speed, just changing how we worked every batter to keep them off balance,” he concluded.

The Hornets had threatened to answer the first-inning score in the home half. Hunter Mayall hit a bouncer that ricocheted off Moore’s glove then Schneider’s glove (from second) up the middle for a single. Garrett Bock sacrificed him to second then Jordan Taylor was hit in the head with a pitch. Fortunately, it was a glancing blow and he suffered no ill effects.

Joiner then beat out an infield hit to load the bases but Moore got Bullock to pop out then won a battle with Butler to end the inning with a strikeout.

Butler would get the last laugh but only after Moore retired 11 batters in a row before B.J. Ellis led off the sixth with a single to center. With one down, Garrett lined a single over Schneider’s head to bring up Mayall at the top of the order.

Another battle ensued but, after fouling off a pair of two-strike deliveries, Mayall hit a grounder to short. Logan Patterson got the force at second but Mayall beat the relay to first to keep the inning alive.

With courtesy runner Hayden Daniel at third, Spoon, the Van Buren catcher, saved a run by smothering a pitch in the dirt on the first delivery to Bock. Mayall left first early to try to draw a throw but Moore just made sure Daniel stayed at third. Mayall took second putting the tying and go-ahead runs in scoring position.

Bock worked the count full then Moore bent a surprising curve over for the strikeout to end the threat.

In the bottom of the sixth, though, Joiner spanked his second hit to center with one out. The speedy Wilson came on to run and advanced on a wild pitch. Bullock drew a walk to set the table for Butler’s dramatic shot to right.

“Brady just did what we knew he could do,” Coach Bock commented. “Just clutch. He’s done that before.

“We’ve been working so hard on (going to the opposite field) from last year but really pounding it the last three weeks,” he added. “To stay inside and walk away from your hands and he did it right there, and with two strikes. He smoked it.”

The Hornets will try to continue their climb up the standings ladder on Thursday when they travel to Russellville.