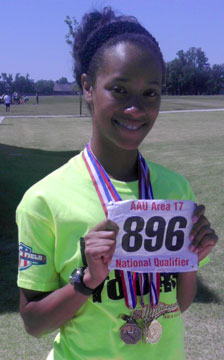 The duo will compete against the best track and field talent from around the country at the Junior Olympics, held at Eastern Michigan University, Aug. 1-3.

Royal, who graduate from Bryant High this spring and will be competing at Northwestern State University this fall, also qualified in all of her events. She was first in the triple jump, covering 35’9”, and second in the 100 meter hurdles with a time of 15.35.