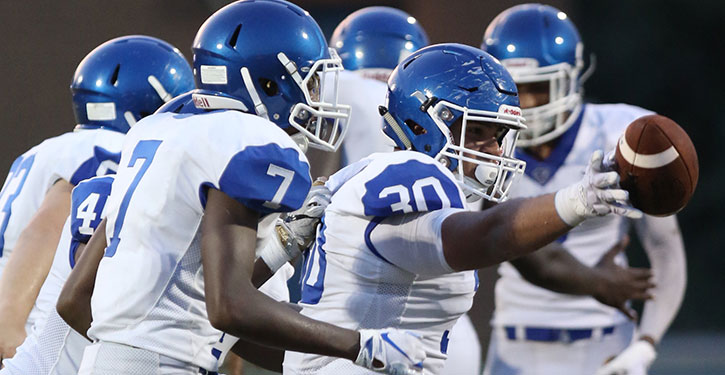 Salt Bowl 19: Are teams as good as they’ve ever been?

The Salt Bowl has always kind of felt like a one-game season. Back in the day, when either the Bryant Hornets or the Benton Panthers were having a rough season and the rivalry game between them was played at the end of the season, it was a last chance to salvage something, bragging rights, to get a lift going into the off-season.

Now that both teams are perennial post-season teams in their respective classifications and the game is at the start, it’s magnified. The hype climbs higher and higher. The crowds at War Memorial Stadium get bigger and bigger. (Could they draw 40,000 fans tonight?) And the games themselves have been plenty competitive.

With the new zero-week scheduling this year, the game has been moved up a week and it’s actually made it even more of a one-game season for Bryant, which will have next week off before diving into a rugged all-7A schedule that includes seven games against 2017 playoff teams.

Benton will come back and host Arkadelphia next week then take its bye week.

“The game itself is big enough,” said Bryant head coach Buck James. “I could care less how many we’ve won in a row or if we won last year. What matters to me is what we do this year and how well we do it, because there’s not anything we can do about next year right now; there’s nothing we can do about last year. All we can do is take care of now. Now is the most important thing we’ve got going on. To play some football and play it against our crosstown rivals and play it to the best of our abilities.”

Though both teams are known for some high-flying offense, the game figures to be decided in the trenches where both are strong. Each wants to run the ball to set up the passing game.

Last year, Bryant’s defense only allowed a few 100-yard rushing nights. Those who accomplished it reads like a who’s who of the top running backs in the state from Little Rock Catholic’s Samy Johnson to Conway’s Michael George to North Little Rock’s Brandon Thomas. That includes Benton’s Zak Wallace, who had one of the best nights, rushing for 177 yards and catching passes for another 69 stripes with five touchdowns overall.

Wallace will be running behind a line that includes a pair of 300-pounders and another guy that goes 295.

“They’re a big, strong, physical football team,” James said. “It all starts with Wallace. He’s the key. We’ve got to stop him running the football. He likes to run downhill. He likes to get momentum and our defensive front has got to do a heck of a job.”

But, as strong as the Bryant defensive front was last year, it may be even tougher this season with end Nate Wallace and tackles Kajuan Robinson and Josh Salguerio returning. Austin Bailey, who played considerably off the bench in 2017, completes the top-notch front four with Jake Wright back at linebacker and a playmaker in Catrell Wallace moving to a hybrid linebacker spot after showing he could be a difference-maker at end last year.

Though middle linebacker Jakob Neel is out with a knee injury, the Hornets have developed several players that can help out there. Their play could be key.

Likewise, the Hornets want to run with senior LaTavion Scott lining up behind an offensive line that is developing, anchored by returning starter Blaise Smith at tackle. Scott rushed for 124 yards and grabbed 77 yards worth of passes with a touchdown by land and air in Salt Bowl 18.

If the Hornets can establish the run, James said, “That will lead into us being able to throw the football.

“We’re going to go with that same approach every time we go and play,” he added. “We’ve got a big strong offensive line as well. We’ve got a great running back tandem. We’ve got receivers that can go catch the football, though we don’t have a lot of speed at receiver. But we’ve got some guys that can carry their pads.

“We’ve got a three-year starter at quarterback and it’ll be the third time he’s been in this game,” the coach noted.

“They’re a reckless-abandon defense,” he said of the Panthers. “They’re in a 3-3 stack. They’re stunting. You don’t know where the stunts are coming from. They do a good job of disguising their coverages and leaning in to help on other people. They’re a very well-coached football team.”

This season has a chance to be special for both teams.

As for the Salt Bowl, consider that, as freshmen, each of the three classes that make up this year’s Bryant team, combined to go 29-1 including the current 27-game winning streak.

So, all things being equal, the question becomes, has Benton’s three classes combined to improve enough to overcome that plus the improvement that the Hornets have made (bigger, faster, stronger, as James likes to say)?

We’ll know by the end of the night.