Salt Bowl will again include a lot more than the game 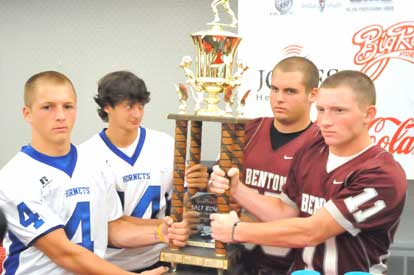 Tickets are $5 for all ages and available at all Big Red Valero locations across central Arkansas as well as the athletic directors' offices at both schools. Tickets will be available at the gate.

This will be the 37th gridiron meeting between the two schools. Benton leads the series 24-11-1 but Bryant, with last-year's 36-12 win, has won nine of the last 11 meetings.[more]

Benton, with new head coach Steve Quinn, will be the home team this year. The fans will sit on the west side of War Memorial Stadium.

Last year, the game was marred by the torrential rains and high winds that were the remnants of Hurricane Gustav. In previous games, the attendance approached 25,000 and as many or more are expected to attend this year.

In a press conference at the stadium on Tuesday, Aug. 11, State Senator Shane Broadway went over the details of the festivities surrounding the game, noting that this year, the game is a lead-in to the season-opening game for the Arkansas Razorbacks at War Memorial on Saturday, Sept. 5.

The new addition to the activities is a fundraiser for Arkansas Rice Depot, Broadway announced. Financial donations and peanut butter will be collected before the game at an Arkansas Rice Depot truck which will be located outside the stadium. In advance of game night, donations can also be made at local bank and credit union branches. Both schools will also be holding fundraising events.

A press release handed out on Tuesday provided other details: 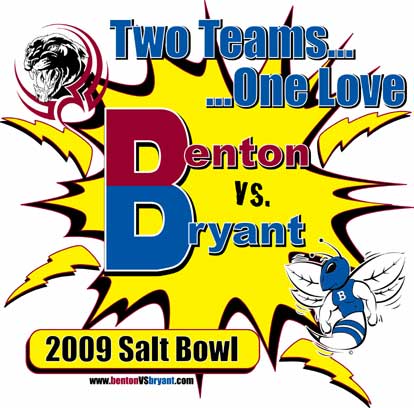 "Bryant Fitness Zone is again the sponsor of the Salt Bowl trophy and will also present a $500 check to the winning team to go into the Booster Club's scholarship fund.

"Each ticket has a coupon on the back for a buy-one-get-one-free burger at Sonic of Benton.

"Salt Bowl t-shirts are now on sale. The logo on the shirts was designed by students from each school. They can be purchased online at www.bentonvsbryant.com or at participating locations. They will also be available at the Benton Maroon and Gray scrimmage game and fish fry on Friday, Aug. 21, and at the Bryant Swarmfest at Saturday, Aug. 29.

"At halftime, three lucky fans will be given the chance to win a truck from Everett Buick-Pontiac-GMC. Participants will be selected at a pre-game pep rally on Thursday, Sept. 3, at Everett. You can sign up now at Everett Buick-Pontiac-GMC. A participant will also be drawn from the numbers on the programs sold at the game. The programs are being published by Insight Communications with ads sold by the band booster clubs at each school, in part to benefit the band programs. To win the truck, participants will have the chance to throw a football into the bed of the truck. If the ball stays in, they win."

The pre-game pep rally at Everett will be from 5 to 7 p.m. and will include coaches, players, bands, cheer and drill teams. Drive Time Sports with Randy Rainwater will originate its broadcast from the site.

"In conjunction with the Salt Bowl, local banks and credit unions in Saline County will once again host Arkansas' Largest High School Tailgate Party. The event will be from 5 to 7:30 p.m. on the east side of War Memorial Stadium. Free hot dogs, chips, and Coca-Cola will be available and each will have a tent set up along the drive into the stadium. Midtowne Church will sponsor a Family Fun Zone, complete with football throw, bounce house, and football bungee run.

"Each of the schools' bands, cheerleaders and drill teams will be let off of the bus and pass through the tailgate party to the stadium, similar to what is done at each Arkansas Razorback home game at War Memorial.

"Before the game the Benton and Bryant Pee-Wee football teams will be introduced and recognized on the field.

"The Benton and Bryant ROTC programs will present the colors.

"Jones Heating and Air will be giving away t-shirts during the game."

The second annual Salt Bowl Golf Tournament, a four-person scramble, will be held on Labor Day, Monday, Sept. 7. There will be a shotgun start at 1:30 p.m. at Longhills Golf Club in Benton. Those wishing to sign up to play can call Longhills at 316-3000. Proceeds from the tournament will go to benefit scholarship programs at each school.