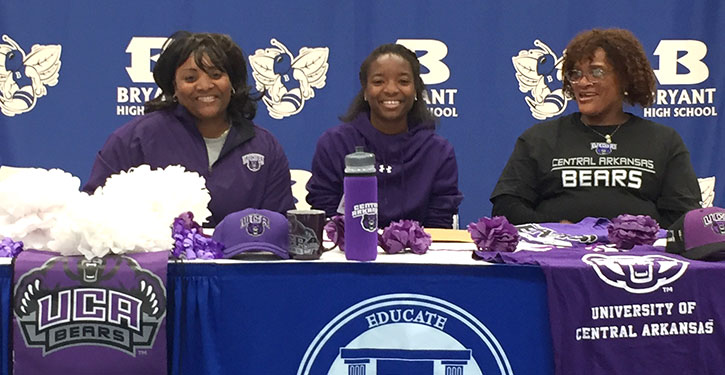 Here’s all you need to know about Kayla Scott’s track career:

When she came to Bryant before her sophomore year, she decided she wanted to run the hurdles. Why?

“Sprinting was too easy and I needed a challenge,” she stated.

It was a struggle her sophomore year but she got better and, afterwards, she went to work.

“I realized where I sat with the team because I realized I wasn’t as fast as them,” she recalled. “So, at the end of 10th grade, I mean as soon as we got out of the season, I was training like 24/7. I would train in the mornings at UCA, go to train with (former UCA coach Mason Carter) twice a day — 6 o’clock in the morning then 2 o’clock — then I’d go train with somebody else for strength training.

“I was so determined to glide across — not bunny-hopping the hurdles anymore — I worked until I got there,” she added. “Junior year was just me trying to improve and better myself because I’m still making mistakes.”

She soon became as much of a sure thing as the Lady Hornets had, winning or finishing second to rival Taylor Conway of Conway. One would win, the other would finish at her heels. At Conway’s regular-season ending meet last May, Scott set down her best times. She won the 100 hurdles in 15.83 and the 300 hurdles in 45.98.

In the conference and state meets, however, Conway edged her out for first, something Scott hopes to remedy next spring.

After that, she’ll be headed to the University of Central Arkansas (UCA) to continue her education and her track career under scholarship. On Tuesday, Scott, the daughter of Roslyn Tillman of Bryant and Van Robert Scott Jr. of Vernal, Utah, made that official as she signed a national letter of intent with the Conway school.

“Kayla is a very, very determined girl,” said Lady Hornets head coach Keith Dale. “When I first met her, she was at the absolute bottom of all of our hurdle group. And she just had this desire, this want-to, to be the best.

“If I had to say if anybody was most improved of any of our track girls, she’d be the one,” he asserted. “She’s gone from the absolute bottom to the top where, last year, she was, at one point, the fastest 300 hurdler in the state. That says a lot for her, how much work she’s put in and just her desire to make those achievements.

“So, UCA is getting an athlete that’s going to work hard, is going to do whatever it takes to give them what they want,” he noted.

Dale told of Scott coming to him after the track season in the spring to ask what she could do to be better. He invited her to work on her endurance by running with the cross country team during the summer and, wouldn’t you know it? She wound up running this fall and finished in the top seven for the Lady Hornets at the Class 7A meet.

“I’m a military child,” she said. “My mom’s retired. I ran in Missouri, Maryland, Texas then I stopped for a few years before I came here.”

“ROTC is just another way to kind of show everybody else what I’m doing,” she said. “I’m actually third in the state for physical training through ROTC.”

She gave Carter a lot of credit. “He’s been a really good asset. I tell him he’s the reason I’m so good. He’s like, ‘No, Kayla, you do all the work.’ But he really is the reason. I’m the type to not stop until I get it right and sometimes that makes me frustrated with myself. He’ll calm me down. He knows how to coach very well.”

There were never really any other schools that Scott considered, she said.

“I heard that UCA has the best P.T. program so I’ll major in Biology and do P.T., then continue with that for the whole four years. Hopefully, I’ll stick with that and I won’t have to change my major.”

Based on her running career, there’s probably not much chance of that.