Senior Sox hang on for 6-4 win over Lake Hamilton 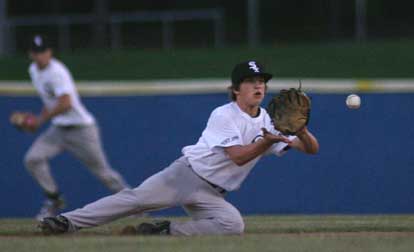 The most notorious example of the Bryant Black Sox' second-game droops came in 2007 of all seasons. The team lost 7-1 to Lake Hamilton and looked so bad that manager Craig Harrison wondered whether his team could manage a .500 season. He and coach Tic Harrison convened a team meeting in the outfield after the game, called their team out for its effort and the wind sprints across the outfield grass commenced.

Ironically, that team not only played better than .500, they won 41 games, claimed a State championship and a Regional title on the way to become the first Bryant team to reach the American Legion World Series.

Another lackluster performance against the Wolves in 2008 resulted in a sprint session as well. So, going into Tuesday's second game of the season, again with Lake Hamilton, the Sox were made well aware of the history.

As it turned out, a crisply played game for six innings turned into a white-knuckler at the end but the Sox survived with a 6-4 victory thanks to a fine fielding play from second baseman Austin Benning and a heads-up reaction by pitcher Tyler Sawyer.[more]

Bryant also benefitted from a big three-run error by Lake Hamilton in the fourth. Otherwise, the story was the continued glow of Brennan Bullock's white hot bat. Bullock, who was 4-for-4 in the Sox opener against Hot Springs on Monday, driving in runs with each of those hits, went 3-for-3 on Tuesday, knocking in runs with two of those safeties.

He'll try to extend that season-opening streak on Wednesday when the Sox go for a 3-0 start at Hot Springs Lakeside.

"Each game this week is a little more of a test," Harrison noted. "Last night was an opener and tonight was a little better team. (Wednesday) will be a test for us on the road at Lakeside then Friday will be a bit test with North Little Rock."

Bryant led 6-0 going into the seventh inning as Kaleb Jobe and Justin Blankenship combined on the two-hit shutout. Austin Queck relieved in the seventh and gave up a run on a single, a force out, and a long double by Jacob Szmuc who had three hits in the game. It appeared Queck, who pitched an inning on Monday, had the second out of the inning when Tanner Neighbors hit a tap in front of the plate. Bryant catcher B.J. Ellis sprang out to get the ball but didn't pick it up cleanly. His throw was late and in the dirt, putting runners at first and third with one out instead of one at third with two down. And when Queck issued a walk to Tyler Bradshaw to load the bases, Harrison went to Sawyer which had been the original plan.

"Our plan was to throw Jobe four, JB two — I thought JB threw the ball real well for his first outing — and we were going to close with Sawyer," Harrison related. "With a 6-0 lead, I didn't want to use Tyler if I didn't have to because we don't know about Trent (Daniel) still on Friday."

Daniel, the lefty who pitched well at the University of Arkansas-Fort Smith this spring, has missed the first two Sox games with a stomach ailment. He's slated to start Friday against a North Little Rock team packed with players who have returned from college.

Sawyer made one good pitch after another only to have the Wolves pick up two infield hits on little bleeders to drive in runs. Randy Young's was a slow roller to the right of first baseman Ben Wells that left the Hornets with no play as Szmuc scored. Then Chris Walker rolled one to short that Jobe charged and fielded. But the ball hadn't been hit sharply enough for him to have a play as Neighbors scored.

"That's baseball and when you put the bat on the ball you never know what'll happen," Harrison observed.

With the bags juiced, Sawyer and Lake Hamilton clean-up hitter Chris Oldner battled to a full count before the Bryant right-hander snapped a curve over for a called third strike that raised the ire of the Lake Hamilton fans as Oldner questioned the call. 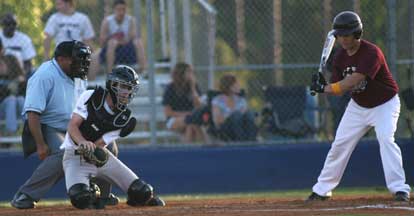 With two down, Josh Fortner bounced one to the right side that appeared to be destined for right field for a two-run single that would've cut the lead to a run. But Benning flagged the ball down with a dive to his left. With Sawyer covering first, Benning's throw nearly retired the batter. But he was ruled safe as Bradshaw scored to make it 6-4. Young, in turn, tried to sneak home as well, hoping to catch the Sox unaware. But Sawyer alertly looked to the plate and fired a strike to Ellis who tagged Young out to end the game.

"Austin made a great play there to save the ball from going into the outfield," Harrison acknowledged. "I thought the guy was out at first but it was a head's up play by Sawyer to get the guy at home."

To start the game, Jobe retired the first seven he faced before giving up an infield hit to Szmuc. Jobe bounced off the mound to field the swinging bunt up the third-base line. Szmuc not only beat the throw, he got to advance to second when Jobe's throw was wild.

Angry at himself, the right-hander lost some focus at that point and issued walks to Neighbors and Bradshaw to load the bases. After a visit from Harrison, however, Jobe found his groove again. He struck out Tyler Faught then ended the inning by inducing a grounder by Walker to Brady Butler at first to end the threat. 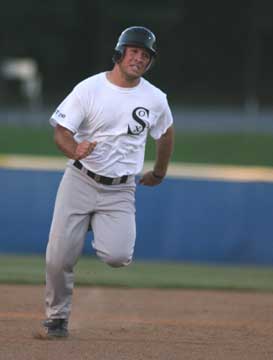 The Sox had taken a 1-0 lead in the second when Blankenship, who was 2-for-2 in the game, shot a single up the middle, swiped second and scored Bullock's first hit, a single to center.

Oldner opened the fourth with a double down the right-field line but Jobe and Sawyer, at short, worked a pick-off play and Oldner was retired after a brief rundown between second and third. Jobe followed up by striking out Fortner and Will Harris to end the frame.

In the bottom of the inning, Bryant tacked on a run when Jobe legged out a triple, Butler walked and Blankenship came through with a sacrifice fly. Bullock kept the inning going when he laced a double to right-center. B.J. Ellis walked to load the bases with two out for Benning. On the first offering from Webb to Benning, the batter shot a grounder towards second that figured to end the inning. But the ball got through the legs of Neighbors, the second sacker.

Butler and Bullock scored easily and, when Benning got caught in a rundown between first and second, Ellis broke for home and beat a throw there from Walker who had stopped the rundown when it appeared Ellis might sneak home.

In the bottom of the fifth, the Sox tacked on a run. Jonathan Wade was hit by a pitch then consecutive singles by Blankenship and Bullock brought him around to make it 6-0. Ellis followed with his first Senior Legion hit before Fortner, who had relieved in the fourth, got out of the inning.

"For six innings, we played a good ballgame," Harrison stated. "We caught a break and kind of busted it open (in the fourth). then we relaxed a little bit. We'll take it. You know, I've been here a few times when everyone has gone home and we were still in the outfield. Hey, a win's a win. We'll take them any way that we can get them."