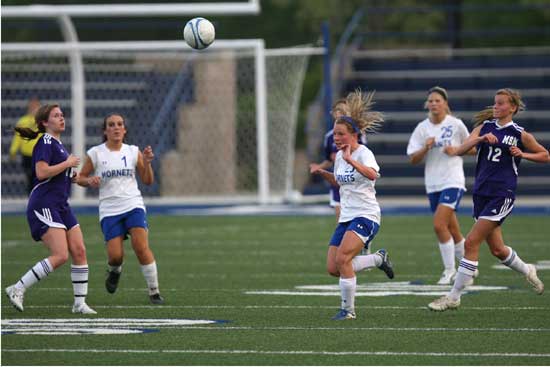 The Bryant Lady Hornets came ready to play against an opponent that was just as[more] dangerous in all aspects of the game as Bryant is. The deciding factor in their 2-1 win over the Mount St. Mary Belles would be momentum, keeping pressure up. 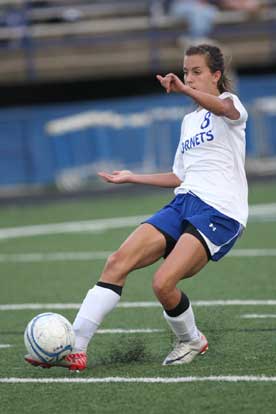 Pressure is just what the Lady Hornets did. From the early minutes of the game, they were firing on all cylinders. Rori Whittaker started it off by taking a shot at 34:36 but just off target to the right.

The Belles had an early offensive chance as well but were called offsides at 33:10.

Katie Moore fed the ball to an open Kaitlin Gaiser but the shot was just over the top cross bar. At 26:13 remaining in the first half, Shelby Gartrell had a nice ball crossed to her by Moore. She got around the Belles player to take a shot but the keeper ran out of the box and was able to stop the attack.

As the play moved down to the other side, London Abernathy was there to back up Lady Hornet keeper Kaitlyn Miller when the presence of trouble loomed.

With less then 10 minutes left in the first half, the Belles’ first threatening shot came but was wide to the left. At 4:30, Abernathy saved a goal that was just inches away from crossing into the goal at the upper part of the net. But Abernathy, using her height to her advantage, got the ball cleared away and back to the Lady Hornets’ offensive strikers.

Moore had a rainbow shot that just got stopped by the keeper with 2:10 before the horn sounded for half.

Thirty-one seconds into the second half, Lexi Balisterri put the Lady Hornets on the board with a shot 17 yards out from the far left of the field that found the back of the net in the upper right corner.

The Belles wasted no time as they went on the offensive strike with a corner kick at 36:29 that was saved by Miller. Tori Rose saved another point at 32:42.

Shelby Gartrell's speed could not be matched by any of the Belle players. She was able to dribble around numerous defenders and take a few shots but they were just off target.

The Belles tied the game at 22:19 when a player broke free and, in the middle of some chaos, scored to level it up 1-1.The Belles kept up the offensive strike and shot again at 14:09 but the ball just went over the top rail. With 11:46 in the game, a Mount player kicked a low ball that skimmed across the grass and had a nasty curve that had the fans holding their breath until Miller came up with it.

Miller had another great save at 8:15 as she dove to her right to stop a hard shot from going in. She had another one at 5:26. She ended the night with four saves.

With play going back and forth the rest of the way, it almost seamed certain that the Lady Hornets and the Belles were going to meet for some penalty kicks. But the speed of Gartrell paid off with :43 left in the game. She broke free and took the ball 35 yards, got past the last defender and, with only the Belles keeper in the way, took a shot. The keeper came forward and Gartrell, doing a little move past her, saw an open net and hit the mark. With the crowd screaming and the players excited, the scoreboard read 2-1.

The Lady Hornets were able to hold off the Belles for the final :43 to secure the victory.

Bryant improved to 8-2 overall and 2-0 in the 7A/6A-Central Conference going into a trip to Van Buren this Friday.