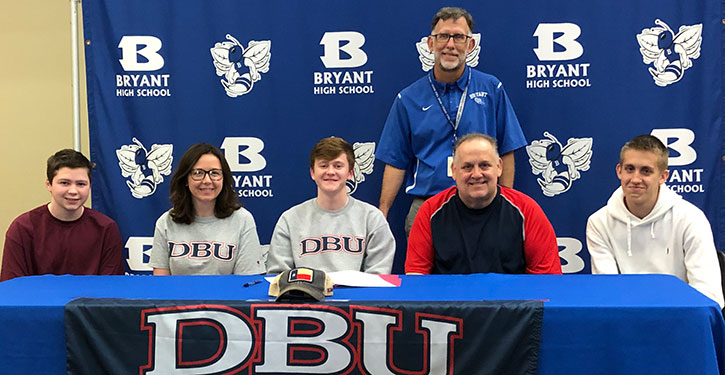 Blake Shields was walking around the multi-purpose room in building 10 on Tuesday like he has had to lately all around the Bryant High School campus with a boot on his leg Tuesday. He had broken his ankle frustratingly in activities not related to his competing as a member of the Bryant Hornets cross country team.

But he was there with his parents Erin and Greg Shields and his brothers to sign a letter of intent to continue his education and running career at Dallas Baptist University, joining teammate Jake Dreher, who signed a couple of weeks ago.

“Blake is a hard worker,” said Hornets head coach Steve Oury. “He’s a good kid. He’s had some ups and downs, injuries and what not that he’s had to battle back from. Right now, he’s not able to run so he’s got a challenge ahead of him just to get back into good condition for running but I have no doubt that he’ll get there.”

Oury has learned from experience.

“You can never count him out,” the coach emphasized. “There’s been a couple of times when I thought, well, this year, he might be struggling a little bit in the middle of the season and then, by the end of the year when the State meet comes around, usually he’s right there. I think he just has a great competitive instinct. He’s a kid that has always found a way.”

“My first time was like an open invitational, the Dash for a Difference,” he related. “I really liked it, so I saw when tryouts for cross country were and was like, ‘You know what? It has to do with running . . .’.

“When I started, I made it, it just clicked in for me,” Shields said. “Coach (Denise) Smith was our eighth-grade coach. She just kind of started it.”

“Coach Smith always kind of gives me a head’s-up about the kids I’m getting,” Oury said. “And it takes me a while to get to know their names. So, my first impression, when I saw Blake, I was saying, ‘Okay, this is a kid coming into ninth grade’ and, back then, he was kind of a little bit pudgy actually. He wasn’t one of them that I was looking at as one of my potential best runners.

“But when he got out there and ran, it was like ‘Whoa, this kid can really go,’” he continued.

When asked what he likes about cross country, Shields said, “It’s a team sport. We rely on everyone. It’s not just one person. We get together, and we work as a team, trying to succeed and win the meet. That’s what I like about it. It’s team-oriented.”

At first glance, you might not think that but each member, whether they’re in the scoring five or behind them, is crucial in putting space between the runners from competing teams. If you’re team’s fifth guy is, say, 20th, and you can come in behind them forcing another team’s fifth runner back to 28 or 29, it helps create a point differential between your team and their’s.

“You’ve got to have a sort of mental toughness,” Shields acknowledged. “When you’re getting into the race, you’re tired, your debating on quitting. But you’ve just got to put that in the back of your head and just keep going because you know you’ve got to be there for your team.

“That started out hard and it’s always been a challenge,” he said. “I just try to be as good as I can be. That’s really what I keep in my mind.”

Shields has tried to help out on the track team but, he said, “I just kept getting injuries with hips and stuff. But cross country is just great. I love cross country so much.”

Regarding DBU, Shields said, “It started off on a campus tour. They found interest in me, I guess. I have a pastor who goes there. I contacted him, and he was like, ‘Yeah, I can get you in touch with the coach.’ And I’ve been talking to him ever since about it. He said, ‘We have a spot for you,’ and that, with the time that I have, races and stuff like that, I’m more than qualified to be on the team.”

“I just felt called there,” he added about his choice. “I thought about other schools just around here, but I just felt like everything kept pushing towards there. I like the campus. It was small, the faculty-to-student ratio, the more religious input into studies. I like that input.”

“I think it’s great that he’s going there with Jake Dreher,” Oury said. “That’ll be a good thing for both of them, teammates as Hornets and teammates as Patriots.”

“It’s more comforting,” Shields added. “I feel like I can have an instant link to go with having the ability to make more friends in athletics.”

As for his academic plans, he said, “I want to study Biology. I want to pursue like pre-Med stuff as well, be a nurse, possibly. I like the link that they have with the nursing program at Baylor.”

Now Blake Shields has a whole lot more to look forward to than just getting out of that dang walking boot.