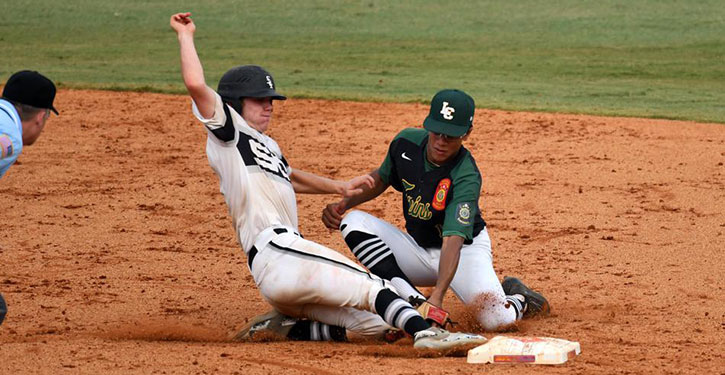 Sox blanked for the first time all season in Series debut

Austin Shurtleff slides around a tag as he advances to third base. (Photo by Matt Roth/The American Legion) 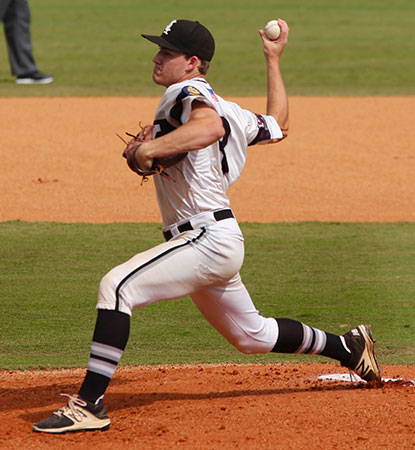 SHELBY, N.C. — For the first time in 48 games this season, the Bryant Black Sox were shut out on Thursday as they opened play in the 2017 Senior American Legion World Series. Right-hander Julian Washburn of Lewiston, Idaho, scattered eight hits, walked three and struck out just one but forced the Sox to strand 10 in a 4-0 victory on the opening day of pool play at Keeter Stadium.

“Their pitcher threw a heck of a game and we just couldn’t get the big hit,” acknowledged Black Sox manager Darren Hurt.

Bryant now faces a must-win in its next two pool play games as they return to action on Saturday morning at 9:30 against Mid-Atlantic Regional champion Hopewell, N.J., which opened Thursday with a 6-3 loss to nearby Randolph County of Ashville, N.C., Southeast Regional champs. 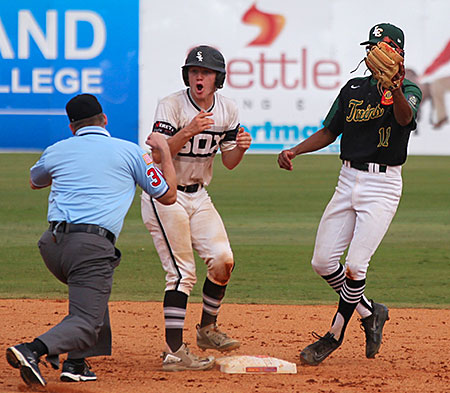 Dylan Hurt, left, can’t believe he was called out on a pickoff play at second. (Photo courtesy of Paul Dotson)

Bryant, 41-8 (a corrected season record) won the Mid-South Regional and is making only its second trip to the World Series. The Sox played in the national championship tourney in 2007.

For five tightly-played innings, Bryant starter Aaron Orender matched Washburn, blanking the Idaho team, which broke through with three runs in the sixth.

Orender, who had been pinpoint with his command through five without a walk or hit batsman, started the sixth with one of each. A long fly to Logan Allen in center allowed the lead runner, Alex Light to tag and go to third. Moments later, trail runner A.J. Davis stole second, drawing a throw. Second baseman Seth Tucker tried to cut it off and fire back home as Light broke for the plate. Light got in safely to put the game’s first run on the board. 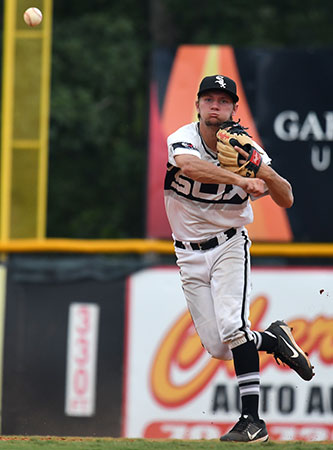 But Orender got the next out on a pop to Tucker and was just an out away from escaping with just one run. Chase Adkison was walked intentionally to set up a force but, a pitch later, Danny Robinson came through in the clutch, driving home another run with a single to left.

Chris Powell was hit on the ankle by an errant pitch and, on the next delivery, Kolt Olson singled up the middle to make it 3-0. Robinson tried to score as well but Allen threw him out at the plate with a strike to catcher Dylan Hurt.

And, in the bottom of the inning, Washburn shackled the Sox 1-2-3 to hang onto the momentum.

Lewiston added a run in the seventh. Light singled with one out then Davis shot a knock up the middle. Light lit out for third and when the throw from the outfield over-shot everyone and got into the dugout, Light was awarded home play to make it 4-0.

Will McEntire relieved Orender, who was named top pitcher in the State Tournament and came in with a 1.70 earned run average. McEntire retired the last two in the seventh and worked a 1-2-3 eighth. Boston Heil pitched a scoreless top of the ninth. 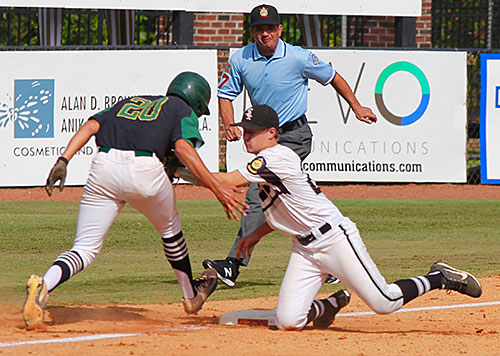 Scott Schmidt applies a tag on a successful pickoff at third. (Photo courtesy of Paul Dotson)

Alex Shurtleff and Brandon Hoover each had two hits for the Sox.

Lewiston threatened to score first. In the top of the second, Jaden Phillips cracked one to the right side that Tucker knocked down but could not make a play to first. A wild pitch and a single by Adkison put runners at first and third with one out.

That’s when Orender and third baseman Scott Schmidt executed a perfect pickoff play to nab Phillips and take considerable starch out of the inning. 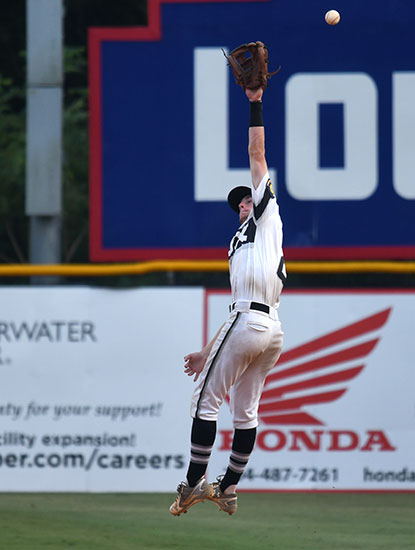 Seth Tucker leaps high to try to haul down a liner to right. (Photo by Matt Roth/The American Legion)

In the home third, Bryant made a bid to score when Hoover swatted a single to right, took second on Coby Greiner’s sacrifice and third on Allen’s sharp single to center. But Washburn kept the Sox at bay, forcing both runners to be stranded.

Orender and the Sox defense set down Idaho in order in the fourth. In the bottom of the inning, Bryant put together another threat only to be denied on a bang-bang play. Dylan Hurt had single to left and Alex Shurtleff had slapped a base hit to right.

With Jake Wright at the plate, trying to sacrifice runners into scoring position, he squared to bunt and missed. Hurt, trying to get a good jump from second and anticipating contact, had to hustle back when Atkison fired a pickoff throw to second, trying to pick him off.

Though photos show Hurt might’ve gotten back in ahead of the tag, Hurt was called out.

And, sure enough, Wright followed with a single to left that might’ve driven in the run from second. 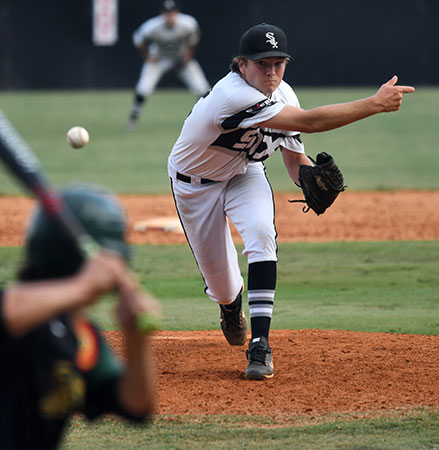 Boston Heil delivers a pitch during the top of the ninth in Thursday’s game. (Photo by Matt Roth/The American Legion)

With two down, Hoover was walked intentionally to load the bases. A grounder to short resulted in an inning-ending doubleplay.

Orender and the Bryant defense worked around a pair of singles that, with a sacrifice, had runners at the corners with two out and the top of the order coming up. But the Sox’ right-hander got Riley Way to pop it up. Orender hauled it in to keep the game scoreless for the time being.

But the Sox were set down in order in the bottom of the inning and that set up Idaho’s three-run uprising.

In the bottom of the seventh, trailing 4-0, Bryant gave it a push once more. Hoover sliced a one-out double to right that was nearly caught with a diving effort by Powell who had to leave the game with a shoulder injury. 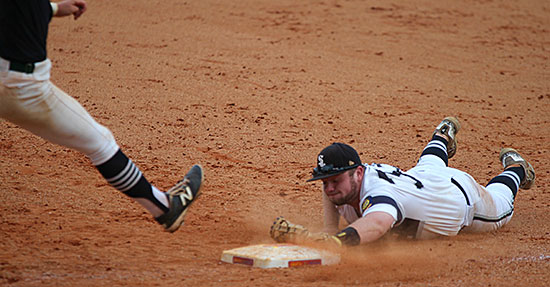 First baseman Brandon Hoover dives to tag the bag just ahead of the runner after snagging a grounder to his right. (Photo courtesy of Paul Dotson)

When play resumed, Greiner drew a walk but, again, Washburn answered the challenge and kept the Sox off the board.

McEntire cruised through the top of the eighth and, in turn, the Sox tried to mount a two-out rally in the home half. Shurtleff’s infield hit and a walk to Jake Wright got their hopes up but Washburn ended the inning with a strikeout.

Heil hit a batter and gave up a single to Davis with two down in the ninth. Luke White’s pop to Tucker at second closed out the inning.

Hoover got on base again to lead off the bottom of the ninth but, any glimpse of a comeback was dashed when Lewiston turned a doubleplay. A grounder to third ended the contest on Washburn’s 114th pitch. 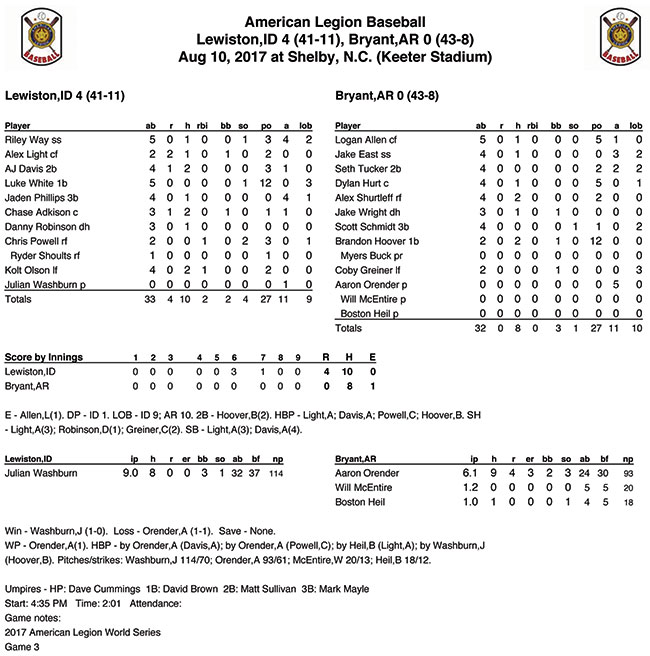