Cody Gogus and Marcus Wilson combined on a five-inning no-hitter as the Bryant Black Sox Junior American Legion team bounced[more] back from its first loss of the season with a 17-0 romp over Benton Sports Shop at Bryant High School Field on Wednesday. 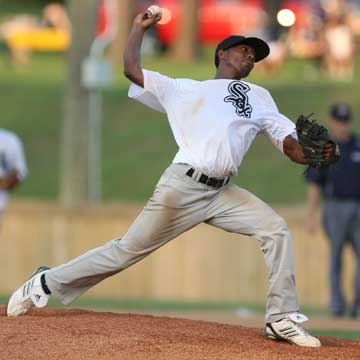 “We came out focused and hit the ball hard,” commented Sox coach Jimmy Parker. “I thought we might be a little flat, coming off the other day but they weren’t. They came back and they were ready to go. I was proud of them.

“Cody and Marcus did a good job throwing,” he added. “You can’t ask for much better than what they did. It was good to get them some good work in.”

Gogus pitched three innings, walked two and struck out three. Wilson, in his first appearance on the mound this season, walked three in the fourth but escaped without surrendering a run when he picked off a base-runner at second and recorded the first two of his three punch-outs. 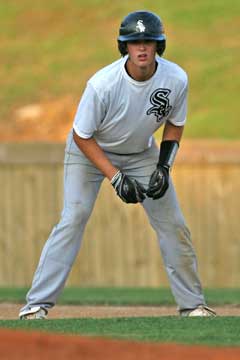 Offensively, the Sox got more than they’d need in the first inning when they scored eight times.

Gogus had worked a 1-2-3 first on just 12 pitches, fanning two in the opening inning. Green led off the bottom of the inning with a shot to left-center for a triple. After Green scored on a wild pitch, Trevor Ezell was issued a four-pitch walk then stole second. Wilson’s bouncer to short was booted and Gogus walked to load the bags for Daniel Richards who lined a single to left-center to drive in two.

Tryce Schalchlin dumped a single into center to load the bases again for Josh Davis, who grounded into a force at second. Gogus scored on the play to make it 4-0.

Davis swiped second, took third on a single by Zach Graddy and scored when Thompson shot a one-hopper between third baseman Jonathan Dixon and the bag for a two-run double. Thompson tagged and went to third on Green’s long fly to center then scored the eighth run on a wild pitch.

Gogus issued a one-out walk to Tyler Turbyfill in the top of the second. With two down, he ended the inning by picking Turbyfill off first. 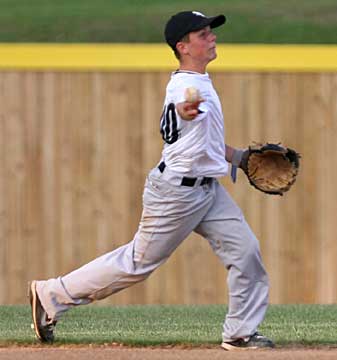 Matt Mitchell relieved Benton starter Ethan Hendrix in the second. He walked Wilson, who stole second and took third on a wild pitch. He scored when Gogus shot a bad-hop single off of shortstop Michael Higganbotham. A wild pitch moved Gogus to second then, with one out, Schalchlin was hit by a pitch. They worked a double steal which allowed Gogus to score on Davis’ roller to short, making it 10-0.

A walk to Braxton Zimmerman in the top of the third came to naught in the Benton third as Gogus finished strong.

The Sox tacked on three in the bottom of the frame. Green singled and stole second, took third on a wild pitch and scored when Gogus’ fly to left center was lost by the outfielders in the dusk and fell in for a hit. Ezell and Wilson, who had walked, followed Green home when Richards’ fly to left was misplayed, making it 13-0. 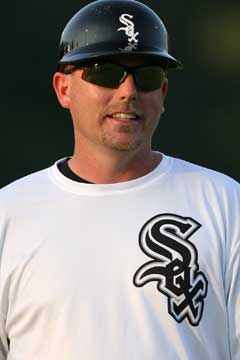 Wilson relieved for Bryant in the fourth and promptly issued walks to Tyler Massey and Mitchell. But Wilson picked Massey off of second. Hendrix tapped a 1-1 pitch in front of the mound. Wilson fielded the ball nicely but his throw to second was too high and both runners were safe. A two-out walk to Jay Davies loaded the bases but Wilson fanned Jacob Pinkerton to escape with the shutout and no-hitter intact.

The Black Sox’ fourth began with pinch-hitter Austin Caldwell lining to left. But Thompson singled, Green walked and Ezell lashed a double to drive in a run. A double by Wilson plated Green and Benton made another pitching change.

Lefty Jordan Allred was greeted by a shot up the middle by Gogus that chased home Ezell.

By then, the Sox were advancing base-to-base. When Richards’ grounder to third was mishandled, Wilson came in with the final tally.

Wilson settled in on the mound in the top of the fifth, setting Sport Shop down in order to close out the contest.

The Sox return to action on Saturday, June 4, against the host team at noon in the Ozarks Baseball Classic behind held at the Community First Bank Sports Complex in Harrison.In the second round, the Sox will take on either a team from St. Louis or a team from Rogersville, Mo. If it’s a losers bracket game, it’ll be at 5 p.m. If it’s a winners bracket game, it’ll be at 7:30.Missouri teams from Harrisonville, Cassville, Warrensburg and Lamar will compete on the other side of the bracket.