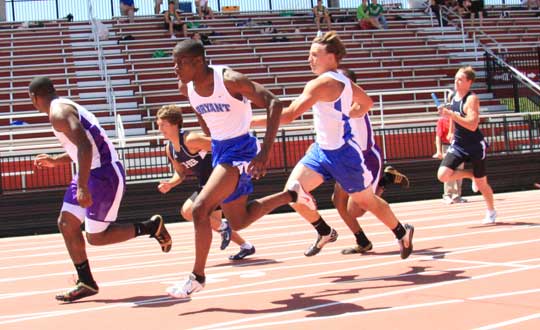 FAYETTEVILLE — The Bryant Hornets used an outstanding performance by their sprint crew to earn a sixth place finish at the Class 7A State Track Championships at John McDonnell Field at the University of Arkansas on Thursday. The 4×100 meter relay team of Dillion Winfrey, Tanner Tolbert, Kendrick Farr, and Sammill Watson won the state title in a time of 42.90. In the preliminary round, the same relay team set a new school record with a time of 42.48.

"I'm really pleased with how things turned out, especially in the sprint events,” said Hornets coach Steve Oury. “We got off to a sluggish start in the field events, but once the running finals started we began to score some points. The 4×100 team almost gave me a heart attack. In the finals, we had a terrible handoff in the first exchange, and when I saw an officials flag go up I was convinced we had been disqualified for making the handoff out of the exchange zone. Fortunately, a different team was called for a violation, so the victory was ours."

"I thought Caleb Thomas ran a beautiful race in the 100 meter dash, as did Kendrick Farr in the 200 meter dash,” Oury said. “Both of them may have a chance to make the Meet of Champions with the times they ran. Tanner Tolbert was his usual workhorse self. One day meets with prelims are really hard on him with all the events he does, so he did a great job of gutting it out."

Tolbert scored in the long jump and the triple jump. His long jump of 21’9.5” was good for sixth. His triple jump coverted 42’2” to earn eighth.

"All in all, this has been a great track season for us,” Oury concluded. “I'm really going to miss the seniors who will be leaving us. They have been a fun group to coach and they are an outstanding group of young men. Coach (Brad) Stroud and I wish them the best of luck as they go off to college."