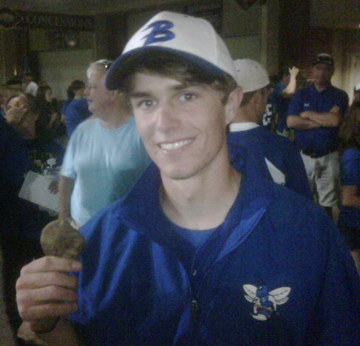 FAYETTEVILLE — While much was made on this site about the Bryant Hornets switching jerseys to bring the team closer together at what turned out to be the end of a stretch in which they lost seven of eight games, the real reasons for the turnaround that resulted in a nine-game winning streak and a State championship was revealed after Friday night’s game at Baum Stadium.

When the Hornets ended their six-game 7A-Central Conference losing streak at Lamar Porter Stadium against the Catholic Rockets, student-coach Hunter Alford picked up an unusual flat, round rock and declared that it was the team’s lucky rock. In every game since then, the lucky rock was in Alford’s pocket and it came out for display amid the celebration after Friday night’s 12-0 win over Van Buren in the State championship game at Baum Stadium.[more] 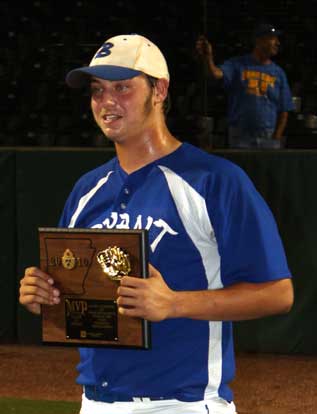 Then, there were the uniforms.

After the win over the Rockets, head coach Kirk Bock and his assistants Frank Fisher and Travis Queck declared they would not wash their uniforms or socks (and whatever) as long as the Hornets were winning.

That was on April 24. The Hornets haven’t lost since including the championship game nearly a month later.

During Friday’s celebration in front of the third-base dugout at Baum, Queck said his socks stood up on their own when he took them off. Bock admitted, “I picked them up to let them air out and as soon as I picked them up, I threw up.”

The State title is just the fourth for a Bryant High School boys team ever. The Bryant boys cross country team won back-to-back State championships in 1991 and 1992. The only other one was when the Hornets basketball team won the Class 3A State championship under Joe Treat in 1980-81.

Ronnie Mayall turned 50 yeas old on Friday. He told his son, Hunter, the Hornets top hitter and lead-off man, all he wanted for his birthday was a State championship.

Speaking of fathers and sons, Bryant’s senior centerfielder ended his career on a stellar note going 3-for-3 in the game with a triple and three runs batted in. He was a sophomore on his dad’s State championship team in Harrison, and spent his first seven years in Van Buren, going to school with some of the current Pointers players.

“This is amazing,” he said after the game. “There’s not words to describe how this feels right now, knowing that this is the last game I’ll ever play for my dad and going out like that. Especially being from Van Buren and everything, it’s just a great feeling.”

“It’s awesome,” said Ben Wells of being State champion after pitching a perfect game over five innings in the title game. “I don’t know how to describe it. It’s unbelievable. All the hard work we’ve done all year. It paid off.”

“It’s amazing,” said senior first baseman Brady Butler. “That first inning, we put three on them, I knew right then, they don’t want none of it.”

“It was the first inning,” agreed senior left fielder Brennan Bullock. “We put three up and I knew but it didn’t hit me until that last pitch. I was like, ‘Oh, we’re about to get it right here.’ It’s crazy, amazing; pretty awesome.”

“At the very beginning when I came out here, there were some butterflies,” he added. “Once we put that three runs up in the first inning, I knew we had it in the bag.

Wells’ perfect game was just the second by a player coached by Bock in his career. The other, ironically, was by a Van Buren pitcher during the coach’s stint there. And that player just happened to be at Friday’s game.

“Bryan Waters, in the third inning, hollered at me,” Bock recalled. “I hadn’t seen him since he graduated in 1996. “He said, ‘That looks like me out there throwing.’ And I said, ‘You’re exactly right.’ He did the exact same thing against Alma except the first batter of the game nubbed one to third base and we threw him out, then Waters struck out the next 14. We won 10-0. But it was a regular-season game.”