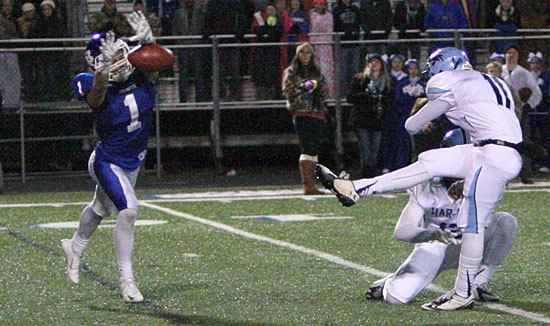 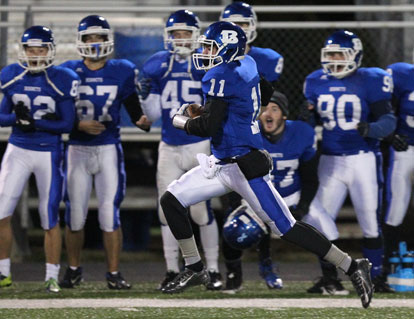 On a fourth-and-goal at the Bryant Hornets’ 4, Springdale Har-Ber’s Luke Hannon was awarded a touchdown reception when he appeared to juggle the ball then knock it out of his own hands with his knee, sending it 15 yards out of bounds to the track at Bryant Stadium. Hornets fans, coaches and players were in disbelief.

Brady Duggar came on to attempt the extra point that would tie the first round Class 7A playoff game with 2:14 left to go. But Bryant’s Drew Tipton sprinted in from the left side and blocked the kick standing up. The Hornets maintained a 28-27 lead that turned into the final score and a victory when Har-Ber tried an unsuccessful onside kick and Bryant ran out the clock. 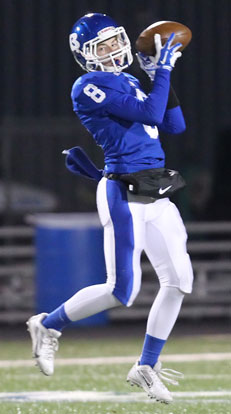 Aaron Orender had five receptions for 52 yards for the Hornets. (Photo by Rick Nation)

It’ll be a tall order to gain win number 10 but the Hornets will give it a shot against the perennial State championship contender, Bentonville, on the road next Friday, Nov. 21.

“I was a little mad,” Tipton said. “They just scored and I guess it was a touchdown. The referee called it a touchdown but the defense didn’t really think it was.

“I’d gotten close on a bunch of the extra points and I figured if there was one to block it’d be this one,” he continued. “I just went all out and their end didn’t touch me so I had a straight shot to it.”

“But, anyway, we got the block and preserved the victory,” he added.

The coach asserted that it never should’ve come down to all of that including Hannon’s non-catch catch.

Leading 28-21, the Hornets defense made a stop with the help of a pair of Har-Ber penalties. The offense, led by senior quarterback Brandan Warner who turned in a tremendous game, passing for 338 yards and rushed for 62, drove from their own 22 to the Wildcats’ 19.

They had a first down and, at worst, they appeared to be in chip-shot field goal range for Alex Denker, which would’ve given them a two-score lead with time running out. But a major dead-ball penalty backed them up to the 35. On third down, Warner’s season-high 36th pass was his season-high 25th completion, the eighth to junior Evan Lee. It got the Hornets back to the 23. Denker tried from 39 yards out and had plenty of leg but the ball sailed just left of the upright and Har-Ber still had a chance with 6:45 left in the game.

The Wildcats pushed it out to midfield but faced a third-and-7. Quarterback Caleb Daniels was nearly sacked by Ryan Hall but escaped and launched a long pass down the left sideline. Hornets’ linebacker Kyle Lovelace appeared to have the inside position against Har-Ber’s Trey Smith inside the 10. Both went up for the ball and got their hands on it but Smith came down with it at the 6. 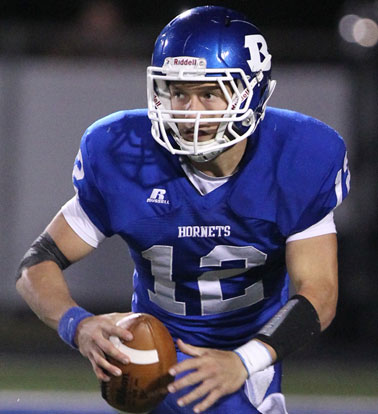 Brandan Warner passed for 338 yards and rushed for another 62. (Photo by Rick Nation)

But the Hornets stuffed three running plays including a bootleg by Daniels, his first carry of the game. He evaded blitzing safety Steven Murdock in the backfield and headed toward the left sideline only to have Tipton and linebacker Devon Alpe meet him at the 4.

Bryant took a timeout with 2:18 left and when play resumed Daniels threw to Hannon who was open in the left front corner of the end zone. He got his hands on it but never pulled it in as he went to the ground and lost it. But the Wildcats got the call.

“We got a first down inside the 19,” Calley noted. “We get a 15-yard unsportsmanlike penalty that pushed us out of very make-able field goal range. I’m happy with the victory but frustrated that we can’t finish the way we should finish.

“This group has been resilient all year,” he continued. “We’ve found a way to overcome penalties and injuries and all that stuff, found a way to win. Hopefully, we can keep it going another week.”

Coming into the game, the Hornets had rushed 390 times and passed 158. Warner was 95 of 148 for the season. The coaches put it on his shoulders after looking at video of Har-Ber’s stout run defense, featuring 6-2, 345-pound nose guard Rickey Dobbins. They also noticed some opportunities in the Wildcats’ secondary. 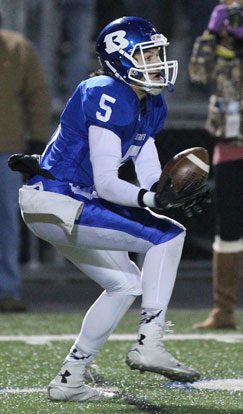 The senior came through with 400 yards of total offense, completing passes to nine different receivers. He credited his teammates, saying, “The receivers, they were amazing. They caught everything I threw at them, very few drops. And the offensive line, I think I was on the ground maybe one time all night. They just do a great job. It was an all-around team effort.

“Coach Lance Parker (Bryant’s offensive coordinator) was giving me confidence all week,” he added. “He knew we needed to throw to win. He was lifting me up all week, telling me exactly what I needed to do.”

“I think the game plan was great,” Calley said. “I thought Brandan and the receivers were exceptional throwing and catching the ball. I worried about it, lost sleep over it. But as the week went on, we got better, caught it fine (Thursday) in practice. We had the heaters out there tonight trying to keep them warm and I was proud of the way they played.”

Lee wound up with 150 yards in receptions and two touchdowns. Warner and DeAmonte Terry each rushed for a score.

Har-Ber took the early lead with a 10-play, 65-yard drive in the first quarter. The Hornets appeared to have the Wildcats stopped but, on a fourth-and-7 at the Bryant 36, Har-Ber went for it and, on a wrap-around draw, big Sione Naslia (6-2, 222) rumbled 20 yards for a first down. Two plays later, Hannon scored from the 1.

He would wind up rushing for 139 yards on 27 carries but 103 of that came in the first half. Bryant made an adjustment defensively and the Wildcats managed just 50 yards on the ground in the second half.

The Hornets responded with a strong drive, picking up their own fourth-down conversion along the way when Warner, back to punt, tossed an 8-yard pass to sophomore defensive end Hayden Knowles.

But the drive stalled at the Har-Ber 30. Denker, who had kicked a 48-yard field goal earlier in the season, tried for 47 and came up just short. 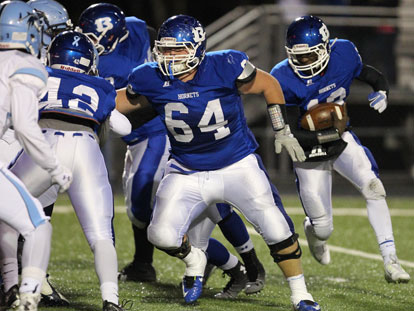 Kylon Boyle followed Caleb McElyea (64) and Demaja Price (42) around the left side. (Photo by Rick Nation)

After forcing a Har-Ber punt, Bryant drove for a tying TD. The drive started at their own 26 but was moved back on the first play by 10 yards due to a holding penalty. They made that up when the Wildcats were cited for pass interference.

Warner broke a 26-yard keeper to the 29 then completed a 14-yard pass to Aaron Orender to set up his 13-yard scoring strike to Lee. Denker tied it with the PAT.

Har-Ber responded with a march to the Bryant 8 but penalties undermined the threat and they wound up turning the ball over on downs back at the 21 with 3:33 left in the half.

The Bryant offense picked up where it left off and drove 79 yards in 12 plays. Warner was 6 of 8 on the drive including five completions in row. Sophomore Austin Kelly made a leaping catch at the 25 then completions to Terry and Quinton Royal got it to the 6. Warner kept to convert a third-and-1 then scored from the 4 with 0:47.8 on the clock. 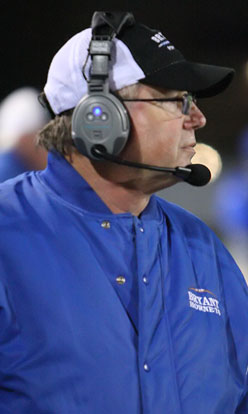 After trading punts to start the second half, Har-Ber drove for a tying score. Daniels heated up with three straight completions, 28 yards to Hannon, 10 more to Naslia than 19 to Hannon for the touchdown. Tipton got close to a block but Duggar converted the extra point.

The seesaw battle commenced. Warner and Lee hooked up for a 67-yard touchdown on a third-down play to put the Hornets back on top. Daniels hit Tyler Blackston with a 31-yard touchdown pass, set up by a rare kickoff return (Denker usually kicks off into the end zone) by Blackston all the way out to the Bryant 44.

On the Hornets’ next turn, Warner and Lee teamed up for 28 yards and, later, Kelly hauled in a 28-yarder to the 1. Har-Ber’s Brady Patrick knifed through to drop Kylon Boyle for a loss but, on the next play, Terry skirted left end, after evading blitzing linebacker Patrick Fine, giving Bryant a 28-21 lead going into the fourth quarter.

Bryant forced a Har-Ber punt even though Daniels and Blackston hooked up on a 30-yard pass.

In turn, the Hornets started the drive that would reach the 19 before being undermined by the major penalty. Warner was 5 for 5 on the drive with two to Lee and one each to Orender, Savonte Turner and Kelly.

“It’s indescribable,” Tipton said of the victory. “It could be the very last time I get to play on our home field. Coming out with a victory like that, getting to lead such a great group of underclassmen and getting to play with the seniors we have this year — it’s been amazing. And winning a game like that just tops it off.”

“I’ve been saying it for 11 weeks now,” he asserted. “We can play better. Yes, we can play better and we’ll say it for 12 weeks. Next week will be a good time to do it. We’ll have to play mistake-free football. We can’t have stupid penalties. If we do, we won’t win. It’s that simple.” 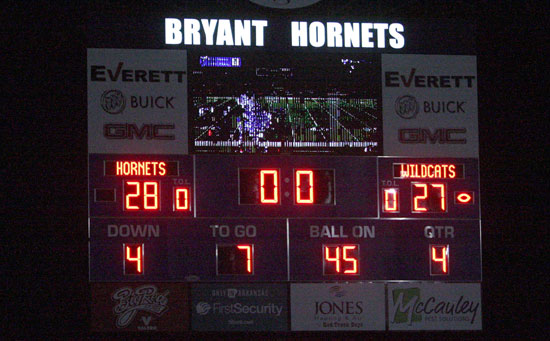 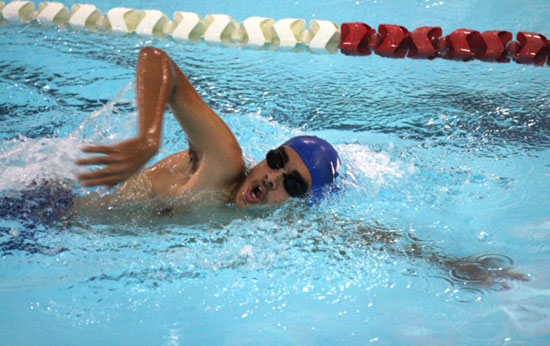 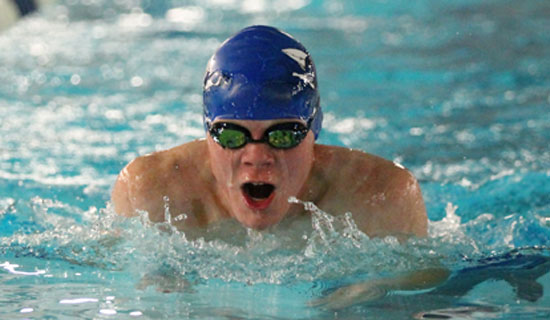