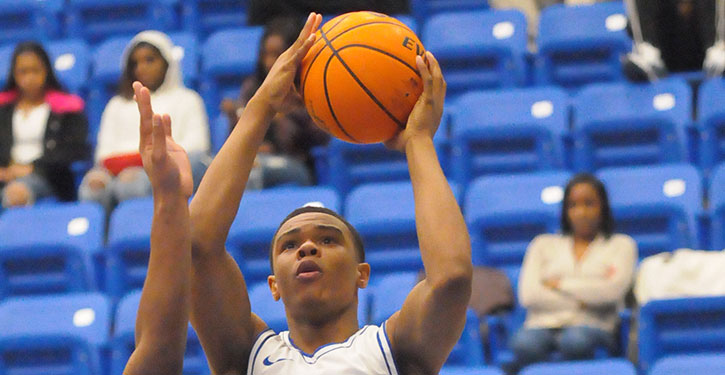 NORTH LITTLE ROCK — It took double overtime for the top-ranked North Little Rock Charging Wildcats to eke out a win over the Bryant Hornets the first time they played. In the rematch on Tuesday night, they managed it again on free throws by Otis Jordan and Bryson Warren in the last 32 seconds.

It helped too that, while North Little Rock was going 7 of 9 from the free-throw line in the fourth quarter, the Hornets, who were often attacking the basket, shot just two free throws as more than once, the Cats’ 6-10 sophomore Kel’el Ware was given the benefit of the doubt inside despite Hornet shooters winding up spawled out on the floor under the basket.

The Wildcats escaped with a 71-67 victory in an entertaining well-played game the Hornets led much of the way.

“I hate it for them because they played hard enough to win, really competed,” said Bryant head coach Mike Abrahamson of his players. “I’m proud of that. There’s a few things we could do better. We probably had too many turnovers and we let those guys in the lane a little bit.

A 3-pointer by Trey Payne with 1:45 left had Bryant within a point, 68-67. A missed shot by Spencer Simes gave Bryant a chance to take the lead.

Simes, a senior who has plagued the Hornets in the past, was held to just 8 points in the game, often covered man-to-man by Bryant junior Camren Hunter, who torched Simes for 23 points and 11 rebounds.

Hunter drove to the basket to try to put his team back on top right at the one-minute mark, but Ware deflected the shot, knocking Hunter to the floor without a call.

North Little Rock called a timeout but when play resumed the Hornets forced a turnover to earn another chance to take the lead. But Bryant turned the ball over to undermine the effort. With :31.4 left, Jordan was fouled and cashed in on the one-and-one to make it 70-67.

Payne’s shot to tie rimmed out at the other end. Sophomore Will Diggins rebounded, but his follow missed as Ware loomed. With :07.5 to go, Warren was fouled and made one of his shots to put it out of reach.

Jordan, who scored just 6 points at Bryant in the double-overtime game, scored 18 on Tuesday. Warren finished with 11.

To go with Hunter’s 23, A.J. Jenkins scored 14, Khasen Robinson 12 and Payne 11. Diggins, battling Ware much of the night, contributed 7 points and 10 boards.

“I’ll take the blame if I waited a little bit too long to try to do something about their post player,” said Abrahamson. “They didn’t feed him that much last time we played them. So that was the plan, especially in the second half. I thought we guarded him well, but I mean he’s 6-foot-10, going against a 6-foot-2 and shooting over us.

“I thought Will defended him really well though, actually making it really tough on him,” he continued. “I probably waited too long to double. I just kept thinking, he’s going to miss the next one, the next one. He doesn’t. He’s really good, really talented but I just didn’t think they’d look to him to carry them.”

Bryant led the entire first quarter from Payne’s first triple to open the scoring. After Simes knocked down a driving jumper, Diggins scored off an offensive rebound. Hunter blocked a shot by Simes and, at the other end, Jenkins pulled up for a short jumper to make it 7-2.

North Little Rock trimmed the margin to 12-10 but Hunter drained a 3, Diggins made a steal and Hunter drove to the rack to make it a seven-point advantage.

The Hornets led 19-12 before Simes got into the lane for a jumper to make it a 5-point lead going into the second quarter.

Behind a pair of 3’s from Craig Collier, the Cats put together a 10-2 run to start the second period. It was 24-21 and they had a chance to increase that margin only to have Payne come up with a steal that Hunter cashed in from 3-ball land to tie it.

But North Little Rock managed to establish a lead and held a 32-28 edge at the half.

Robinson splashed a pair of 3’s on either side of a post-up basket by Ware early in the third quarter and the game was tied at 34. Off a turnover, Jenkins pumped in a triple from the corner and the Hornets were back on top.

The lead seesawed much of the rest of the third quarter and well into the fourth. A three-point play by Hunter with 3:45 left in the third had the Hornets up 44-42. A layup by Diggins off a drive, draw and dish by Jenkins added to the lead.

Collier canned another 3 but Jenkins drove for another basket then added a free throw with :00.4 showing and the Hornets held a 55-49 advantage to start the fourth quarter.

And when Hunter scored the first basket of the final period, the Hornets had their largest lead at 57-49.

North Little Rock surged back and, before Bryant could score again, they’d tied it at 47. Hunter followed his own miss to snap the deadlock with 4:39 left. Ware and Simes scored back-to-back, giving the Cats and edge but, with 3:41 left, Payne converted a pair at the charity stripe to knot it once more.

Jordan snapped the tie with an 18-foot jumper. After a Bryant miss, contested at the rack, Warren scored to make it 66-61.

It was a scramble for a while after that. Finally, Payne hit a 3 with 2:21 left. Ware converted a pair of free throws, but Payne found the range again to whittle the lead to 1 at 1:45.

North Little Rock, which had already clinched the 6A-Central Conference title, improved to 21-4 on the season, 12-1 in conference. The Hornets dropped to 15-11 overall and 7-6 in league play going into their regular-season finale at home against Conway on Friday.

Behind North Little Rock, the standings are a jumble with five teams within a game of each other from second-place to sixth.

“We can do a few things better,” Abrahamson reiterated. “That’s for sure. So that’s what we’re going to work on tomorrow, just continue to try to get better. We’re not a finished product. We want to write our own story here down the stretch, that’s what we plan to do.”

The Hornets will host the 6A State Tournament starting March 4.