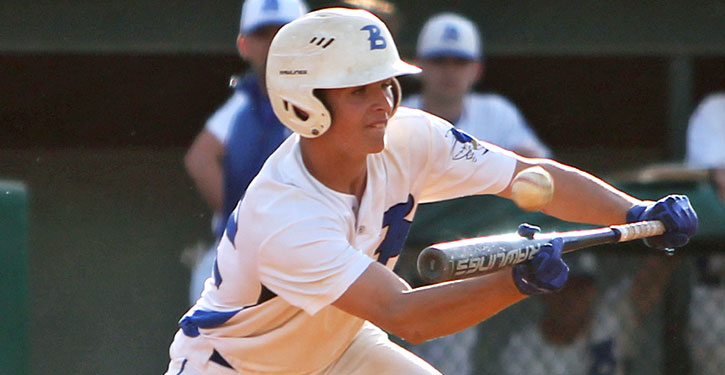 It was Bryant’s year. But it wasn’t.

But the 2018 team only had four seniors, gamers every one. And, though, several of the juniors played key roles in 2017 as sophomores and even greater roles this season, it was tough to match up with a Springdale Har-Ber Wildcats team with 13 seniors.

On Friday, after Bryant had edged Fayetteville 3-2 on Thursday, the Hornets challenged the 7A-West Conference champion Wildcats but they managed just three hits against junior right-hander Blake Adams. Though Har-Ber only mustered five hits, three of them came in one inning, a three-run third and the Wildcats advanced to the State semifinals at the Hornets’ expense, 4-1.

Har-Ber, now 29-4 on the season, will face West rival, Van Buren on Saturday, the only team to beat them in conference play. In the other semifinal, Conway, the lone 7A-Central team remaining and the conference champs, take on Rogers.

“These guys competed,” asserted Hornets head coach Travis Queck. “We were out-manned, but they didn’t act like it, didn’t treat it like they were out-manned. They hung in there and gave themselves some chances.”

Logan Chambers had two of Bryant’s hits, both singles. He also walked. He got into scoring position in each of his turns at bat, but the Hornets just couldn’t come up with the clutch hit they needed, as Adams locked down.

In the first, Chambers singled and went to second on Scott Schmidt’s sacrifice then third on Jake Wright’s groundout, but he was stranded there as Adams ended the inning with a strikeout.

In the second, Coby Greiner drew a two-out walk but was left at first.

Chambers singled with one out in the third then stole second but got no further. In the fourth, Brandon Hoover reached on an error but remained at first.

A two-out walk to Chambers in the fifth led to another stolen base on a wild pitch. Chambers raced to third, but Adams got Schmidt to line out to second.

Meanwhile, Ledbetter, Bryant’s stellar freshman Austin Ledbetter started on the mound. An infield hit by Blaze Brothers and walks to Adams and Lucas McCain filled the sacks, but the Wildcats stranded all three and Kirby Jenkins lined out to Greiner at short.

Ledbetter retired the side in order, using just 10 pitches, in the second. And, he started the third by fanning Brothers. In a nine-pitch battled, Mac McCrosky worked a walk. Adams singled but Ledbetter came back to strike out Jake Williams, the clean-up hitter.

Just an out away from escaping the jam, Ledbetter sawed off McCain, who got just enough of the ball for a tapper that was too far to the left of Logan Catton at third. Greiner got to it but was deep at short and the bases were loaded.

With runners at second and third, Ledbetter came in on Jenkins, who fisted the ball beyond third and down in shallow left-center. Two scored and it was 3-0.

When Ledbetter fell behind the next batter Trevor Brown, Peyton Dillon was brought on to pitch. But his first pitch got away from him and hit the batter, loading the bases.

Sophomore Braden Knight came on to face Hunter Wood and got him to line out to short to end the inning.

The Hornets just couldn’t break through against Adams, who took the shutout into the sixth. But Wright opened the sixth with a double down the left-field line. Courtesy-runner K.J. Merriweather took third on Hoover’s groundout. A balk on Adams allowed Merriweather to score the Bryant run.

Greiner took over on the mound in the fourth and retired the first six batters he faced, aided by a sparkling diving catch by Buck in right to retire Brothers in the fourth. After striking out two in the fifth, Greiner issued his lone walk to Jenkins leading off the home sixth. Brown sacrificed him to second then Wood flew out to right.

Needing just one strike to get out of the inning unscathed, Greiner surrendered a single up the middle to pinch-hitter J.D. Scott, making it 4-1.

The Hornets were set down in order in the seventh and their season was over with a 21-10-1 record.

“I go back and I think about when there was one out in the third,” Queck mentioned. “We got the lead-off out then walked that next guy. Two walks in this game scored. Otherwise, you’re talking about a 2-1 ballgame and we’re scratching and clawing and fighting trying to get that extra one. A couple of times we had runners at third base. We’ve just got to find a way to get that run across.

“We asked a lot of Austin this year, in tight spots,” he noted, “and that kid has done every sport this year. He hasn’t stopped since the beginning of last summer. I’m sure his tank was running a little low but to compete against that team, I thought he did a good job.

“He might’ve done a better job of making adjustments and giving himself a better chance earlier in the game, to get out of at-bats and keep his pitch-count down, stay fresher,” the coach reflected. “His last inning, the two-hole he wound up walking, kept battling off pitches, flaring them off over the side. He’ll learn, you’ve got to find a way to get them out. If you don’t, the next guy’s more important. We’ve just got to go get them.” 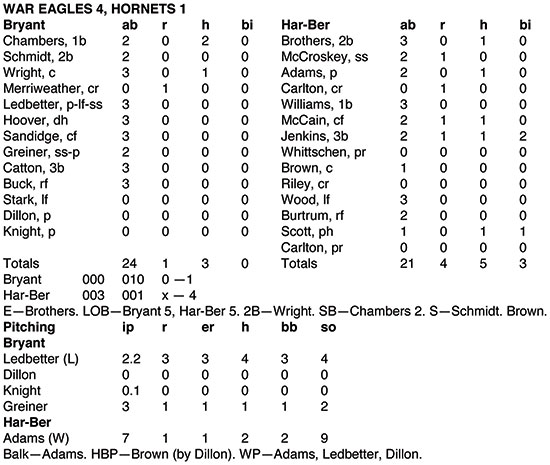