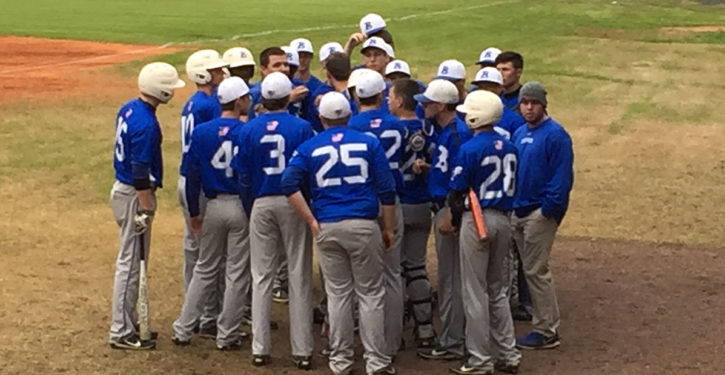 LITTLE ROCK — Seth Tucker took a no-hitter into the fifth inning and a shutout into the seventh then Coby Greiner pitched out of a jam to close it out as the Bryant Hornets surprised the Catholic Rockets with a 6-2 win at Lamar Porter Field Thursday night.

Greiner also had three of the Hornets’ five hits and drove in two runs.

The victory improved Bryant to 2-0 in 7A-Central Conference play, 4-4 overall as they head to Florida for their annual spring break action.

Tucker out-dueled Catholic’s lefty Evan Hiatt, a University of Arkansas commit. Hiatt fanned 10 but walked three and hit a batter. The Rockets committed three errors in the game, two of them during a huge four-run sixth that gave Bryant, which led 2-0 going into the inning, some breathing room. Hank Hannah, another UA commit, relieved to get out of the sixth then worked around a pair of walks and a Greiner double in the seventh.

Through six innings, Tucker allowed just two hits. He threw just 77 pitches going into the seventh. His no-hitter was broken up by Eric Bray’s soft single to right with one down in the fifth. He surrendered a base hit up the middle to William Plafcan to start the sixth but pitched out of a bases-loaded jam to preserve the shutout.

The Rockets put together three straight hits in the seventh to plate two runs before Greiner came on to earn the save.

“Being 2-0 in conference is great going into spring break,” said Hornets head coach Travis Queck. “Seeing those two lefties — the quality they have — that’s going to be beneficial for us later on. And, actually, what was beneficial was (the team’s trip last weekend to) Texas. We saw three great lefties down there and that prepared us for this.

“The guys were locked in today,” he continued. “It’s very impressive to see.

“And, of course, when Seth goes out there and does that, moves the ball around, he gives us a chance and that’s all we ask for,” the coach noted. “He was rolling through it. I told him, ‘Let’s not let anything affect us. Let’s get back in here as fast as we can.’ And he did a good job.”

As well as moving it a round, Tucker changed speeds as well as his tempo.

“There was a point with the umpire where we had to keep having discussions about slowing it down or speeding it up,” Queck related. “That’s an added dimension that we try to press, to try to keep pushing buttons.

“Seth understood that the umpire had a job to do and he wasn’t getting frustrated,” he added. “That’s leadership right there. He said, ‘If they’re more worried about that then they’re not worried about hitting.’ That’s pretty impressive for a young man, for an 18-year-old to have that kind of mindset. He took advantage of it.”

The Hornets grabbed the lead in the top of the first, taking advantage of Hiatt’s early struggled with is control. With one out, Tucker and Cameron Coleman worked walks. The moved up to second and third when Logan Chambers hit a tapper that Hiatt had to make a play on to get the out at first.

Trying to get ahead of Greiner, Hiatt fired a fastball on his first pitch and Greiner turned it around, liner a gapper to left center that drove in both runs.

It was a duel after that. Hiatt struck out the side in the second around a two-out error. Tucker pitched around a two-out walk in the home half, making a leaping stop of a bouncer up the middle off the bat of Luke Wewers to get the final out.

In the third, a two-out walk to Chambers came to naught. In turn, a one-out error put Eric Moll on base for the Rockets. He was sacrificed to second by lead-off man Ethan Fowler but was stranded when Tucker fanned Plafcan.

Hiatt retired the side in order in the fourth and the fifth, striking out five in a row. Meanwhile, Tucker set down the Rockets 1-2-3 in the fourth. But he then faced his first bit of adversity in the fifth. His first pitch of the inning struck J.Matt Rogers. He got Wewers to fly to Coleman in right but his next pitch to Bray ended his no-hit bid.

But he stayed calm and induced a grounder to Clontz at third. He threw to second for a force and the Rockets had runners at the corners with two out and the top of the order coming up. Moll stole second to open up first base but Tucker got two strikes in on Fowler.

At that point, Hornets pitching coach Stephen Tharp visited the mound. He later related that he was making sure Tucker didn’t groove one with the open base and being so far ahead in the count. He also gave his pitcher a strategy to get Fowler.

And the senior executed. Tucker showed the hitter a fastball away out of the strike zone then brought a breaking ball that started in the same spot in over the plate for the strikeout to end the threat.

Bryant’s sixth inning started with an infield hit by Coleman, a slow roller to the right side that Hiatt couldn’t get to. Moll fielded it but by then Coleman was at the bag. That brought up Chambers who got a bunt down for a sacrifice. Plafcan charged in to field it but then through it high over Rogers at first base.

Moll was backing up the play or the runners would’ve both advanced.

So Greiner came up looking to bunt them over. He got it down and Hiatt came off the mound to field it. He gave third base a glance then turned to throw to first only to see that the bag was uncovered as Rogers had charged the play.

The bases were loaded and the Rockets brought the infield in. And it looked like Hiatt might get out of the jam. He got Scott Schmidt to ground to short, resulting in a force at the plate then he struck out Beaux Bonvillain. His first pitch to Logan Catton, however, plunked him, forcing in a run to make it 3-0.

Matthew Sandidge then took a ball before yanking an RBI single to right to make it 4-0.

Hiatt had thrown 102 pitches to that point (out of the 110-pitch limit instituted by the Arkansas Activities Association this year), Hiatt gave way to Hannah. But his frustrations were not over. Jake Wright came up and hit a comebacker to the mound. Hannah fielded the ball, turned and fired to Hiatt at first. But the ball got past him, allowing Schmidt and Catton to score, bumping the lead to 6-0.

In the bottom of the sixth, Catholic threatened after Plafcan’s lead-off single. Cameron Tissue walked and, after Hiatt flew out to Bonvillain in left, DH Cody Hogg was hit by a pitch to load the bases.

The Rockets sent up pinch-hitter Connor Breau. The Hornets played it to trade a run for an out or to turn a doubleplay with the infield back. But Breau tapped one to Clontz at third. With his momentum coming in, he threw home to Wright for the second out of the inning. Wewers followed but, on the first pitch, tapped one back to Tucker who under-handed a throw to Wright for the final out.

Hannah walked Coleman to start the seventh. With Chambers up, Coleman stole second but, when the throw was bad, he didn’t slide. His momentum took him off the base and he was tagged out.

As it turned out, Greiner cracked a double down the left-field line. Scott Schmidt walked then Bonvillain hit a rocket that was speared on a leaping effort by Tissue at short to end the inning.

Bray singled to start Catholic’s rally in the bottom of the inning. Moll doubled to right then, on a 3-2 pitch, Fowler singled them both home.

Greiner came in at that point and got Plafcan to hit a comebacker. Hoping for a doubleplay, Greiner whirled and threw to Tucker covering second. He did a splendid job of reaching for the catch and just keeping his toe on the bag for the out.

Tissue followed with a liner to left that Bonvillain hauled down for the second out. Hiatt stepped in and yanked a single inside the third-base bag. Again, Bonvillain made a good play to hold Hiatt to a single as Plafcan sprinted in to third.

With runners at the corners, Hogg came to the plate and hit a slow roller to the right side to Schmidt at second for the final out. 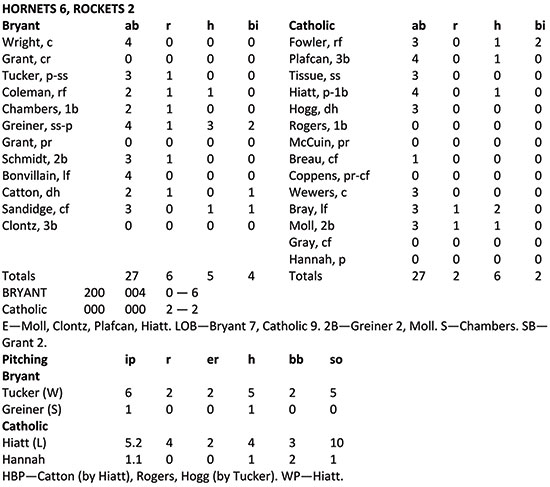