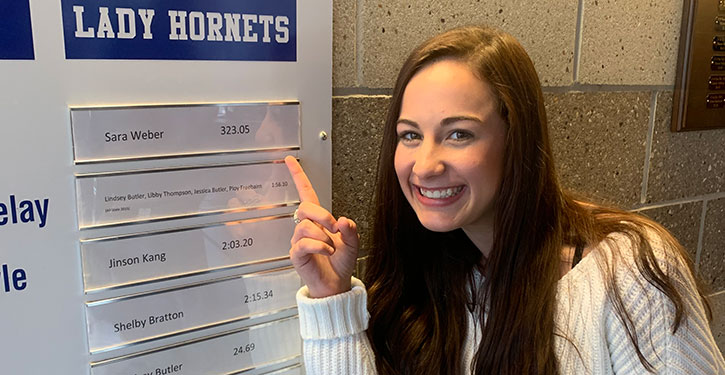 CONWAY — Bryant senior Sara Weber entered the swimming and diving season with her eye on the school scoring record of 280.75 in the one-meter dive set by Alise Heavrin.

She’s come close before but, on Thursday at the UCA January Invitational meet, she reached that goal, shattering the old mark with a score of 323.05.

That highlighted the day for the Lady Hornets who also picked up first-place finishes by Alana Gould in the 100-yard breaststroke (just off the school record pace she set last week); Aidan Halladay in the 500-yard freestyle; and the 200-yard medley relay team that included both Halladay and Gould, along with Shelby Bratton and Simone Dinstbier.

The Lady Hornets accumulated 307 points, finishing second only to Conway (531) and ahead of Vilonia (236) in the seventh team meet.

The Lady Hornets’ next competition will be at the Bishop Park Aquatic Center on Thursday, Feb. 6.

Weber was joined in scoring for the Lady Hornets in the one-meter dive by Julianne Davis, who’s 179.70 score was good for third-place points.

Individually, Dinstbier, Gould, Bratton and Hannah Tennison each turned in second-place finishes (all behind Conway swimmers). Dinstbier’s second came in the 50 free with a 27.69, just behind Conway’s Emily Holman at 26.36). Bratton was sixth in 30.26 with Tennison seventh in 30.89 and Weber eighth in 31.71.