FAYETTEVILLE — On a perfect night, in a perfect place, at a perfect time, the Bryant Hornets’ 2010 season had a perfect ending. The defense was flawless, the offense was opportunistic, and senior right-hander Ben Wells was . . . 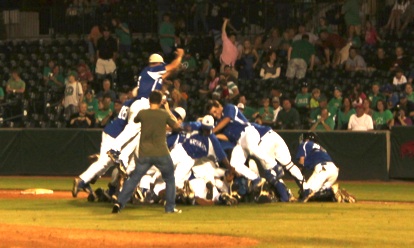 For the first time in the history of the Bryant High School baseball program, the Hornets are State champions with a stunning 12-0 victory in five innings over 7A-Central Conference rival Van Buren in five innings at the University of Arkansas’ Baum Stadium.

Wells became the first pitcher in state high school baseball history (as far as could be determined) to craft a perfect game in a championship contest. He needed just 60 pitches to mow down the Pointers, fanning six and getting errorless support from his defense including sparkling plays by Brady Butler at first and Jordan Taylor at short along the way. He had a three-ball count to just one batter and wound up with a strikeout on a 3-2 pitch.

Counting the seventh inning of the Hornets’ win over North Little Rock on Saturday in the State quarterfinals and the seventh inning in which he struck out the side to nail down Monday’s 1-0 win over Little Rock Catholic in the semifinals at Burns Park, Wells has pitched seven consecutive perfect innings during the tournament. In fact, you have to go back to the sixth inning of the North Little Rock game to find a baserunner. Shaquille Hayes reached on a swinging bunt that was ruled an infield hit with one out in that inning. So, over three appearances, Wells retired 23 batters in a row. 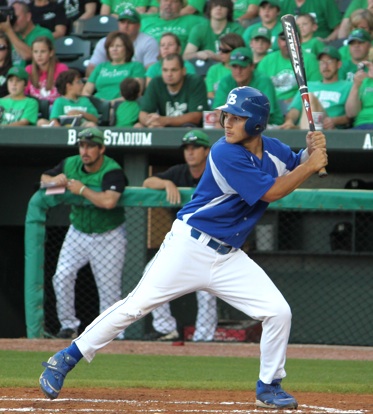 Not surprisingly, he was named the tournament’s Most Valuable Player.

He finished with a flurry, striking out two in the bottom of the fifth including Garrett Hightower for the final out.

“I knew going into the last inning,” Wells said. “I knew they didn’t have any hits. I didn’t realize it was a perfect game.”

Asked when he knew he had his best stuff, he answered, “I knew in the first inning when I struck out (Logan Meaders), I really felt like I had all three pitches working. I was able to locate them well. I was getting groundballs the whole game.”

It was the first perfect game in State tourney play since Brian Wiedower of Greenbrier threw one in the preliminary rounds of the 1985 tournament. It’s the first no-hitter in a final since a pair of Pine Bluff pitchers combined on one against Greenwood in 1973.

Offensively, senior Garrett Bock, the only player on the field that had experienced a State high school championship game before — as a sophomore at Harrison — finished his career (all three years playing for his dad, Kirk) going 3 for 3 with three runs batted in. Hunter Mayall was 2 for 3, was on base four times and scored all four times. Brennan Bullock delivered a key two-run single as the Hornets took advantage of five Van Buren errors, six walks and two hit batsmen to overwhelm the Pointers and ace right-hander Brandon Moore.

For Coach Bock, it was his second State title in three years. He won at Harrison in 2008 before coming to Bryant. 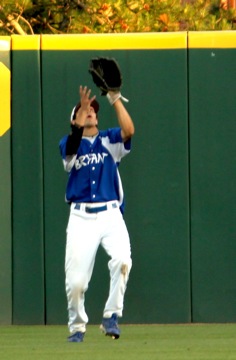 “This is great,” he said. “Just the adversity that we’ve had during the season and to come out like this, you can’t ask for anything better. It’s a story-book ending.”

Bock has said the day before the game that defense would be the difference with Wells and Moore going against each other. He was prophetic. With the Hornets made every play, Van Buren’s miscues contributed to three of the four scoring innings for the Hornets.

“We didn’t have to play a whole lot with Wellsy up there,” he related. “I didn’t know how we would swing it but I knew Wells would be a round the zone and we’d have to play some defense. And the kids did a good job.

“Van Buren’s a great club,” he added. “Everything that could go wrong went wrong for them. And when that stuff happens, it’s hard to win.

“I was watching the Lake Hamilton game before us and they went up 6-0 in the second right there and I said, ‘Dang, that’d be nice.’”

It wasn’t quite six but the Hornets had a 5-0 lead by the end of the second.

“We took advantage of some errors right there and we were able to get on the board and that just kind of calmed everybody down,” Bock related. “Our kids played very, very relaxed. I thought we were more tense against Catholic (in the State semifinal on Monday).”

Wells just needed 10 pitches to get through the first inning but Van Buren came about as close to getting a hit as they would when, with two down, Tyler Spoon slapped a rocket up the first base line that Butler speared with a move to his left, fielding it cleanly and easing to first for the putout. 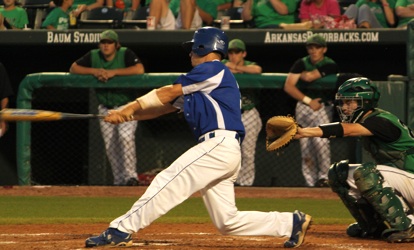 In the bottom of the inning, Mayall greeted Moore with a solid single to center on a 2-2 pitch. Garrett Bock sacrificed him to second then Taylor waited out a walk. Chris Joiner followed with a bouncer to the left side that shortstop Logan Patterson ranged to his right to field, making a tough play. He tried got get a throw to second for a force but his throw was late and errant allowing Mayall to score the game’s first run. Taylor wound up on third and, after Joiner stole second, scored on a passed ball.

With two out, Butler grounded to short and reached on a throw in the dirt that allowed Joiner to score, making it 3-0.

Wells eased through a 1-2-3 top of the second which ended with Hightower’s long fly to center that Bock got back to nab. 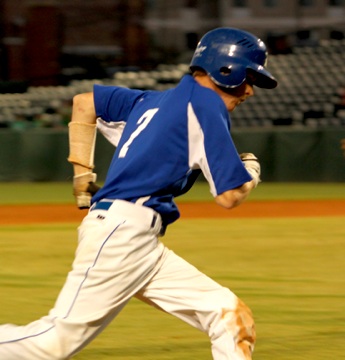 That would be the only ball hit by the Pointers that left the infield.

In Bryant’s half, Moore added to his frustration by hitting lead-off batter Tyler Brown. Caleb Garrett tried to sacrifice but Moore bounced off the mound and got the force at second. After a wild pitch allowed Garrett to take second, Mayall blistered a double down the left-field line to chase him home. And when Bock’s drive to left-center got down between the Pointers’ outfielders, he sprinted around the bases for an RBI triple to make it 5-0.

Wells struck out a batter in the top of the third then induced a pair of grounders to Taylor at short. With two down, Taylor had to charge and make a nice play on a tap by Parker Johnson for the third out.

The Hornets then blew the game up with a five-run third. Another Van Buren miscue got the uprising started. Butler’s bouncer to second was booted then he stole second. Ellis got a sacrifice bunt down with two strikes and, after Brown walked, an errant pickoff to first allowed Butler to scamper home.

Garrett grounded into a force but beat the relay to first and, moments later, swiped second. A walk to Mayall brought up Bock who laced an RBI single to center. And when Taylor lashed a base hit up the middle to plate Mayall, Moore’s star-crossed work in the mound was over. 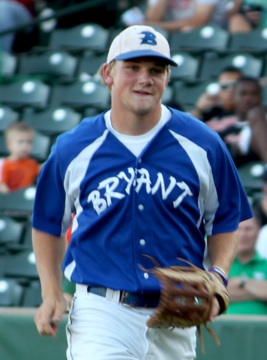 Spoon relieved and walked Joiner to load the bags for Bullock. The senior, who snapped out of a slump with a base hit against Catholic on Monday, ripped an 0-2 pitch on a line into left, driving in Bock and Taylor to cap the inning.

And Wells was cruising with the 10-0 lead. He waded through the top of the Van Buren order in the fourth, adding a strikeout and a nice play himself on a comebacker.

Ellis walked to start the Bryant fourth, Hayden Daniel came on as a courtesy runner and was narrowly thrown out trying to steal. Brown laced a single over the shortstop’s head and, with two down, Mayall hit a roller towards third that drew a wild throw to first. Evan Jobe, running for Brown, sprinted all the way home from first to make it 11-0.

Bock stroked his third hit, a single to right-center to bring in Mayall with the final tally.

The only drama left was Wells’ perfecto. After he closed it out, the Hornets charged the field and enjoyed the traditional State championship dogpile as the considerable Bryant contingent in the stands stood and cheered, including the Lady Hornets’ softball team which will try to make it a historic double for Bryant High School Saturday afternoon at Bogle Park.