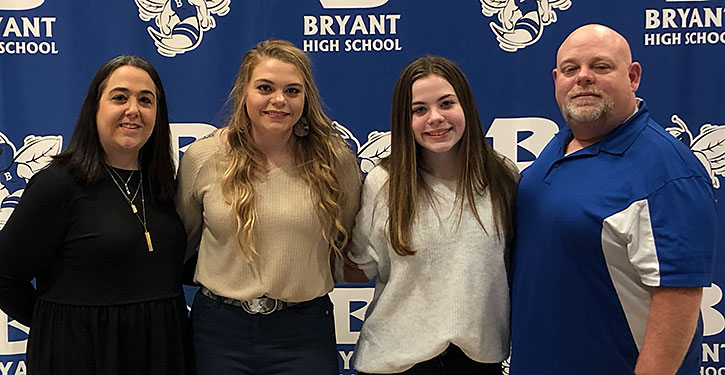 You never know when you’re going to get your opportunity.

The Bryant Lady Hornets had a returning starter pitching for them at the beginning of the 2019 season. But adversity reared up and, for one reason and another, suddenly she wasn’t there anymore.

Bryant went on to win 20 games during the 2019 season including one in the 6A State tournament.

Things sort of “Work”-ed out.

Along with her time during the summer with Maximum Impact, the result was an opportunity to keep playing at the next level. And, on Thursday, Work, the daughter of Shannon and David Work, signed to continue her education and her softball career at Southern Arkansas University Tech in Camden next fall.

“She has really developed over the years,” Dreher said of Work. “Her freshman season she was pretty quiet. I started noticing her work ethic first. She really started putting the work in and developed into a good pitcher.

“I know we’re going to use her and need her on the mound,” she said of this spring’s Lady Hornets season.

“Her confidence, that really held her back when she was young,” added the coach. “As soon as she realized how big the mental game was in softball, I think that really helped her and it still drives her.”

Work said of her improvement, “Just seeing it in myself, seeing the numbers like velocity wise, just getting faster and, once I saw that, my confidence went up. It told me that I could do it.”

And when she got the opportunity, she was ready.

Asked what Work’s best pitch is, Dreher related, “Probably her curve. But she really does mix it up really well.”

Work, herself, had another take on it.

“Definitely my screwball,” she stated. “Or my drop ball; those two work really well for me. I have pretty much have all the pitches that a fast-pitch pitcher can throw. Like rise ball, drop ball, screwball, curveball, change-up, off-speed, all that. Me knowing that I can throw each one of those pitches, it’s what helps me get my strikeouts.”

Work said she found out about SAU-Tech from a teammate on her travel ball team in the summer.

“My dad invited them to come to our softball facility at Maximum Impact,” she said. “So, we had a little tryout, just like four or five girls. And he really liked what he saw of me and Haleigh (Beck) and that’s how we got our offers.”

Work took a visit and liked what she saw.

“It’s like a big family,” she related. “That’s what it feels like. The campus is small. Just going from this big campus at Bryant to a little campus, I like that transition. Everybody knows each other on that campus. I can be really close to my teachers. If I’m having a problem, they can know about it and help me with it. That’s what I like about it.”

And her line of study?

“I want to go into general education to become a teacher and a coach,” she said.