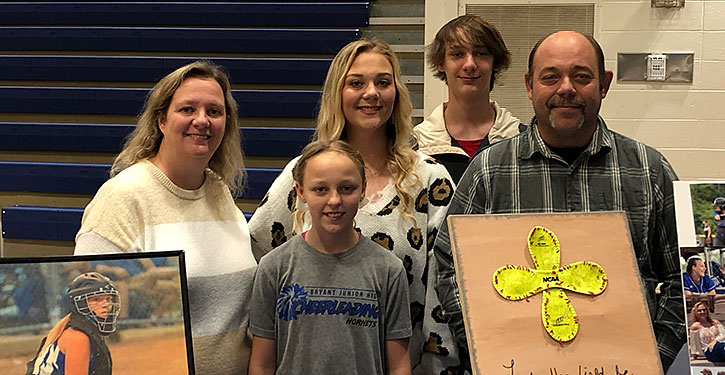 The Bryant Lady Hornets softball team needed another bat. Somebody that could drive in a run when it was needed or get on base, to put the ball in play, make things happen.

Head coach Lisa Dreher tried this one and that one before settling on the most consistent of those, a left-handed bat, junior Haleigh Beck.

Beck’s insertion into the line-up helped lengthen it and bring some consistency to the offense. She had a particular knack of swatting the ball the opposite way, right between third and short.

“She has a really simple, smooth swing and produces a lot of base hits,” said Dreher.

With her play for the Lady Hornets and on her summer team, Maximum Impact, Beck caught the eye of Phillip and Amy Diehl, the coaches for Southern Arkansas University Tech at Camden. They held a tryout at the Maximum Impact facility.

“He said, ‘I really like you and I want you to come play for me,’” Beck recalled. “We just rolled with it.”

On Thursday, Beck, the daughter of Stephanie and Adrian Beck, signed a letter of intent to continue her education and her softball career at SAU-Tech.

“I really didn’t think that I was going to get to go play college softball because I’d had a shoulder injury and I just thought I was done,” she related. “But then this was a God-thing and it came my way.”

With her shoulder injury healed, Beck should be helpful in the field next spring for Coach Dreher.

“She catches and plays other positions,” the coach said. “It just depends on what we have coming back. But, definitely, her strength is hitting.”

Beck admitted that it surprised her how well she wound up hitting for the Lady Hornets last season.

“It actually did. I didn’t think that I would just come out of nowhere with all these big stats,” she said.

And the key to that success?

“Just believing in myself and knowing that I can,” she answered. “Because I didn’t think that I could ever get there. Just working on it.”

And on the field?

“I want to catch, that’s my dream spot,” she acknowledged. “I’m just going to go in and try to be a good utility player where they can play me just about anywhere.”

Beck started playing when she was 4. And she said, she became a catcher right away.

“I was just one of those little kids that, when they’re trying out everybody at the same time, they put me back there and they put the ball through the machine. It came at me and knocked me over and I got up and I said, ‘Let’s do it again.’ So, they just said, you’re my catcher from there on.”

Blue Hornets seventh-grade team edged out by White Hall in second half
When opportunity calls, Work answers the bell