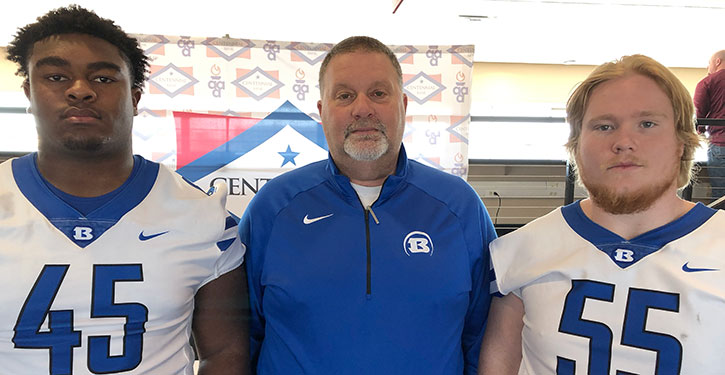 Wilson, Bailey have led lines to championship form for Hornets

At the beginning of the 2019 football season, the consensus was that, if the Bryant Hornets were to return to the State championship game and have a chance for back-to-back 7A titles, the lines, offensive and defensive, would be key.

After all, on each side of the ball, the Hornets returned just one starter. On offense, it was guard Tanner Wilson. On defense, it was defensive end Austin Bailey.

Would they develop into championship-caliber groups?

Well, on Monday, there they were.

At the start of championship week, at the annual Arkansas Activities Association pre-game press conference at War Memorial Stadium, there was Hornets head coach Buck James with a pair of Hornets.

And it was Wilson and Bailey.

Wilson and the fledglings on the o-line including seniors, but first-year starters, Devin Pitts, Ty Johnson and Reese Dawson along with junior Jack Powell and sophomores Jason Shiflett, Brooks Edmonson and Will Diggins, has been good enough to help the offense set a school record for total offense in a season. The Hornets have gained 5,337 yards of offense with a game to go, shattering the old mark of 5,038 yards. The Hornets average 44.9 points per game, another school record.

Bailey and the defensive line, including Kyle Green, David Shifflet, Rodricho Martin, Kennedy Miller, Andy Scott and Brayden Godwin among others, have held opponents to an average of under nine points a game, a school record for the fewest points allowed through a 12-game season.

“To be honest, yeah, I was nervous at the beginning of the year,” Wilson said. “Last year, I was the young guy and all the other guys were seniors and I was kind of like the weak link. This year, going into it, I knew that I would have to step up and be a leader for everybody because those guys are just real young.

“But they’ve done an amazing job,” he added. “They did way more this year than I could’ve done when I was a sophomore. I know that. So, I’m proud of them.”

Said Bailey, “I feel like we’ve handled it very well. At the beginning of the season, there was a lot of talk about people being scared that our d-line wouldn’t be as good. But we’ve definitely handled it well with the pressure, containing the quarterback and stopping runs.”

Aiding that success was a move by Bailey from end to tackle.

“It was a big change,” he said of working inside. “Trying to get off two guys. It was a challenge. But I think I’ve taken to it pretty well, handled it well. I do like it. You just have to look at it that we’re a better defensive line.”

In the previous meeting, that Hornets’ offensive line struggled to move the ball on the ground, finishing with just 56 yards rushing, a season low.

“They play a difference defense than we normally go up against,” Wilson mentioned. “They do a bunch of slanting and stuff. But I think if we can use it against them, we’ll be fine.

“We’ve got a bunch of young guys,” he continued, referring to their game in November. “That was the first time a lot of them have ever played North Little Rock and they didn’t really know what to expect. But they know, going into this, what it’s like.”

The Charging Wildcats rushed for 211 yards including 178 by senior tailback Brandon Thomas in the first meeting. Both are the most the Hornets have given up in a game.

“We’ve got to stop the run,” Bailey asserted. “That’s our first priority. They’re a running team. They’ve got a great running back. So, stopping the run will be key to winning the game. They’ve got a good offensive line, very good at run blocking, not so much at pass blocking. We’ve been working on the kind of blocks they use so I think we’ll handle them pretty well, getting off those blocks and not getting cut.”

“That defense is very important in the championship game,” he added. “That’s how you win championships. The defense is really going to have to step up this game just like we did last year.”

The Charging Wildcats were held to 187 yards of total offense in last year’s championship game.

Neither player was worried about the distractions that lead up to the game. After all, they got through Salt Bowl week every year and championship week is similar.

“It actually kind of helps us get the feel of the championship game,” Bailey said. “Distractions are going to happen. You’ve got to be used to it.”

“Last year was our first year and this year, basically, everybody knows what to expect,” Wilson added. “Like it’s nothing new. We’ll be ready. There’s a lot of stuff going on like on social media and stuff but we’re just ignoring it because we know we’re going to put the same amount of work in as we have every other game. We’ll be ready. We’ll be good.”

They agreed that last year’s experience will be a help.

“We’re going to treat this week just like every other week,” Wilson said.

“North Little Rock is a very good team, offensively and defensively,” Bailey related, adding of last year’s showdown. “With that mindset, coming into that game, we knew we were going to have to come out hard. It’s the same attitude we’re going to carry on to this year, come out and hit them hard.

The game is at War Memorial Stadium in Little Rock. Kickoff is at 7:05 p.m.