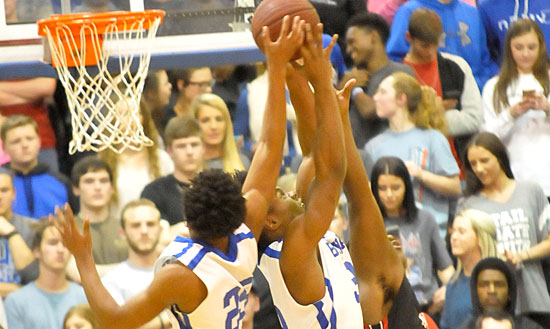 Winning plays down the stretch lift Hornets past Russellville 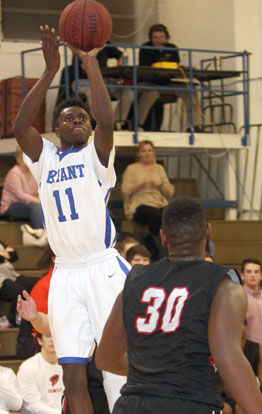 The Russellville Cyclone had trailed from the outset when the Bryant Hornets opened their 7A/6A-Central Conference contest Tuesday night with a 12-1 run. They’d whittled it down to a point on a few occasions but couldn’t manage a lead until an offensive-rebound basket by Porter Anderson with 6:48 left to play.

A Bryant miss gave the Cyclones a chance to increase the margin but they missed too. With 5:15 left in the game, Bryant’s Braylon Steen hit Kevin Hunt with a kickout pass and Hunt drilled his first and only 3 of the game to put the Hornets back on top.

Russellville never led again though Jacob Boles drove for a layup that tied it 47-47 with 4:52 to remaining.

Both teams missed chances at the free-throw line. For Bryant, it was part of a frustrating 20-39 at the stripe.

Bryant spread the floor as the game approached three minutes. Head coach Mike Abrahamson called a timeout with 3:05 to go. When play resumed, the Hornets used some more clock until Hunt found a crease in the defense and went strong to the basket and scoring on a scoop shot over the Cyclones big center K.J. Patrick.

Moments later, Patrick got a chance inside for Russellville but, when he turned, he ran over Hunt who absorbed the charge, giving possession back to the Hornets.

With 1:23 to go, Martin came through with a pair of free throws that made it a two-possession game. But Boles drove the baseline and scored and the Cylcones’ coach Matt Hall called time with 1:05 showing. 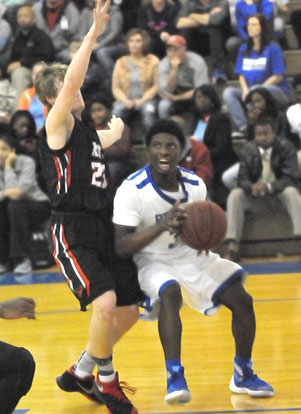 Calvin Allen tries to get around Russellville’s Matt Laws. (Photo by Kevin Nagle)

With :54.2 remaining, Calvin Allen went to the line but converted just once. Boles answered that with :39.2 showing but he too could only get one shot to go down. Up 52-50, the Hornets worked against the Russellville press and, again, Allen was fouled. This time with :18.3 showing. He made the first to make it a 3-point edge.

On the missed second shot, somehow Hunt came down with the rebound and reset the offense. The Hornets ran it down to :06.9 before Allen was fouled again. This time, making his first shot was enough, making it a two-possession game as the Hornets forged a 54-50 victory to improve to 18-6 this season.

Bryant has three regular-season games remaining before the Class 7A State Tournament begins in Cabot on March 2. The Hornets play at Alma this Friday, visit Conway on Tuesday, Feb. 23, then wrap things up with Senior Night against Siloam Springs on Friday, Feb. 26.

“We talk about making winning plays a lot and those things were just huge to help us seal that victory,” said Abrahamson of Hunt’s clutch plays down the stretch. “Calvin and Romen hit some big free throws but that’s like four or five things just from Kevin. That really shows leadership and experience. We just call those things winning plays. When the game can kind of go either way, when you make a play that steers things in our direction.”

“That’s a good team,” he added regarding Russellville. “They’ve won at Van Buren. They beat Alma twice. They’ve got skill players that can shoot it and drive it. They have a winning culture there. And the Patrick kid is just a tough, tough match-up. It wasn’t our prettiest win but it was good to grind one out.” 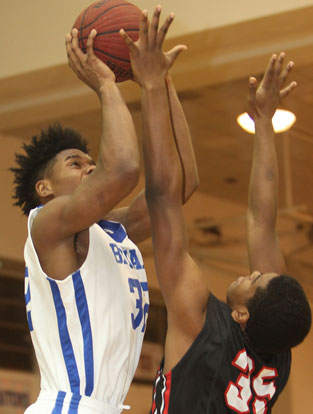 It was important after forging the early lead that the Hornets got some good minutes from their bench. Five different players, Allen, Hunt, Martin, Lowell Washington and Marvin Moody sat with two fouls.

“We had some really good contributions from some kids off the bench to kind of hold things together in the first half,” Abrahamson acknowledged. “Everybody was getting two fouls. I think we played 12 kids just in the first half. They held it together for us, didn’t let it get away from us.”

The early surge opened with Steen hitting a free throw then scoring despite being fouled to make it 3-0. Hunt got the ball back by taking a charge and Allen cashed in with a 3, the first of his game-high 15 points.

After a free throw by Russellville’s Steven Baty, Washington hit the offensive boards to pitch in. Moments later, Hunt buried an 18-footer from just inside the top of the key to make it 10-1 and force a Russellville timeout.

When play resumed, the Hornets forced a turnover and Jordan Walker got an assist on a basket by Washington to complete the 12-1 burst.

Free throws by Patrick and a three-point play by Cole McKown cut it to 6 but Washington beat the buzzer with a stickback, making it 16-4 going into the second period.

The Hornets still led 23-12 midway through the second period with Martin contributing a three-point play and Allen driving for a layup. But missed opportunities at the free-throw line enabled Russellville to carve the lead down to 25-22. 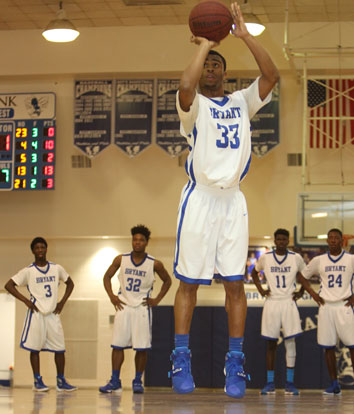 Romen Martin shoots free throws after a technical as his teammates wait on the other end of the court. (Photo by Rick Nation)

That’s when Christian McIntosh was fouled by the Cylcones on a 3-point try. McIntosh proceeded to bury all three free throws and, despite free throws by Boles in the final seconds, the Hornets held a 28-24 halftime edge.

Marquis Rhode scored 8 of his 10 points in the third quarter including a layup off a Bryant turnover that tied the game 33-33 with 3:45 left in the period.

But Allen, who had just knocked down another trey, converted twice at the line to keep the Hornets in front. Rickie Allen followed with a steal and a layup to make it 37-33.

Baty scored off an inbounds play but Martin popped a 3 to make it 40-35 with 2:16 left in the period. Patrick answered with a tip-in and Rhode as well to cut the margin to 1 but Steen hit two free throws to offset a basket by Russellville Zach Carter and the game went to the fourth quarter with the Hornets up 42-41.

On Carter’s basket, as it turned out, Patrick was called for a technical foul so the final period started with Martin on the line pitching in two free throws. McKown and Washington traded free throws to make it 44-43 before Russellville gained its first lead on Anderson’s stickback. 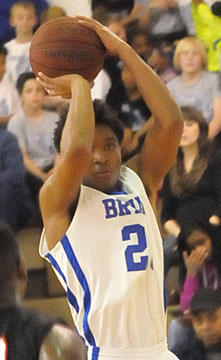 “Obviously, our problems were fouling on defense,” Abrahamson related. “Especially in the second half, we struggled to get defensive rebounds. Offensively, it was a little bit of a struggle to see what we could find our rhythm in. I thought our struggles at the free-throw line prevented us from pulling away earlier in the game instead of just being able to hang on. We made 20 but we didn’t shoot a very good percentage.”