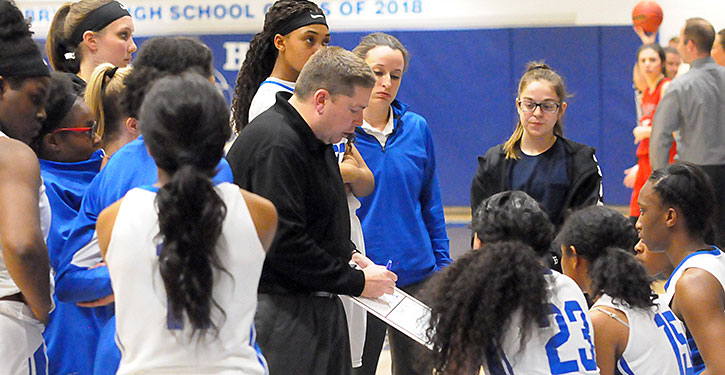 Lady Hornets hang on for rare win over Cabot 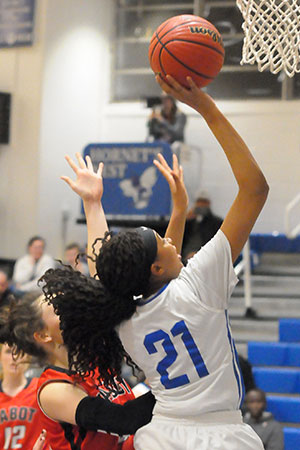 Robyn Gordon goes up for a shot. (Photo by Kevin Nagle)

For the first time since Feb. 18, 2011 — nearly seven years to the day — the Bryant Lady Hornets earned a victory over the Cabot Lady Panthers.

In a game of surges, one way then the other, Bryant’s Ivory Russ hit two free throws with :09.4 showing in regulation to tie the game and send it to overtime. And with Russ adding 5 points, including 3 of 4 at the line, the Lady Hornets eked out a 64-62 victory at the Hornets’ Nest Friday night.

Russ ended up with 13 points and nine rebounds in the game. Point guard Tierra Trotter led all scorers with 22 points. She scored 11 points in the fourth quarter, 16 after halftime.

The Lady Hornets attacked the Cabot defense enough to earn 41 free throw attempts. Though they made just 20, it proved to be just enough.

In the final minute of overtime, the Lady Hornets converted just 2 of 8 free throws. What had been a 62-55 lead with 1:30 left, was thus whittled to the final margin by the Lady Panthers. The only two free throws that were made came from Trotter just moments after a three-point play by Wagner had cut the lead to 62-60. Cabot was held to just two free throws after that.

Lexi Taylor follows through on a 3-point try. (Photo by Kevin Nagle)

“We made just enough plays to hang on there at the end,” noted Lady Hornets coach Brad Matthews. ““But that’s a big win for us, a really good win. I’m happy for our kids, happy we can enjoy another win.”

The defense was such that the two teams combined for 61 turnovers, 32 by Cabot.

“It was back and forth all night,” Matthews said. “Cabot’s so well-coached. (Lady Panthers head coach Carla (Crowder)’s a hall of famer for a reason. We didn’t close it out perfectly, but I thought our kids really fought hard.

“We had a tremendous crowd tonight,” he noted. “I thought the crowd was as good as we’ve had since I’ve been here. It really kind of helped push us toward the end.”

The win improved the Lady Hornets to 6-6 in the 7A-Central Conference, tied with Little Rock Central for fourth going into the final week of the regular season. Bryant has a tough road from here, traveling to North Little Rock on Tuesday before hosting Conway on Friday. Those are two of the three teams tied atop the league standings.

It was a big blow to the Lady Panthers’ chances of making State. They’re not a game behind Fort Smith Southside for sixth place, which garners the last bid. Cabot also finishes against two of those first-place teams, Fort Smith Northside on Tuesday and North Little Rock on Friday.

Cabot took an early 8-4 lead, but Bryant rallied. Lexi Taylor hit a 3 then, off a nice feed from Russ, Robyn Gordon put Bryant head with a three-point play. Trotter drove for a layup and Bryant led 12-8. 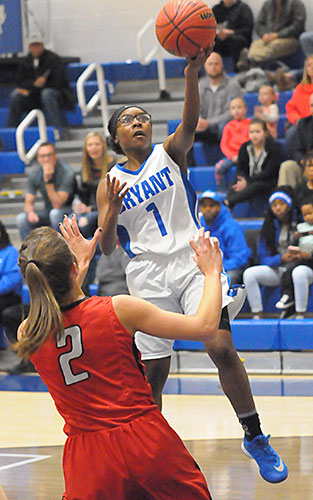 Tierra Trotter takes off for a layup. (Photo by Kevin Nagle)

Emily Belin got the Lady Panthers on track again and it was a 2-point game going into the second quarter.

A three-point play by Celena Martin erased a 14-12 Cabot lead midway through the second quarter. Kalia Walker followed up with a 3 to give the Lady Hornets and 18-14 edge.

But Cabot surged and held a 22-18 lead before, in the final seconds of the half, Walker made a steal and got it to Trotter for a layup that made it a two-point margin at the break.

Grisham opened the second half with a trey, but Trotter banked one in from long distance then Russ, following her own miss, scored to tie the game at 25.

Russ had a chance at the line to give the Lady Hornets the lead but missed twice.

In turn, Belin hit the offensive glass for a bucket then Grisham canned another triple, part of a 9-0 surge.

“We didn’t do a very good job of keeping spacing,” Matthews mentioned. “They made us pay for that.”

The Lady Hornets found themselves trailing 34-25 with two minutes left in the third. A driving jumper by India Atkins stemmed the tide. A three-point play by Gordon contributed the whittling.

With Bryant in an extended trapping zone, Trotter made a steal and scored. Russ swiped a pass and, with :20.8 to go, she tied it at the line, 34-34, going into the fourth quarter.

After the teams traded buckets early in the quarter, Bryant grabbed the lead with two free throws by Trotter with 5:33 to go. She followed up with a layup and, off two free throws by Cabot’s Blair Nichols, Trotter got a driving jumper to go in to extend the margin to 45-40.

Belin interrupted but Bryant kept the momentum, though missed free throws kept the Lady Hornets from breaking the game open at that point.

As it was, they built a 9-point lead. Russ scored off the offensive boards and Atkins delivered a three-point play. The Lady Hornets appeared to be on their way to putting the game away.

But Cabot rallied. The 51-42 lead disappeared. Sparked by Hannah Chandler, they not only caught the Lady Hornets but passed them.

The Lady Hornets’ only scoring was a free throw by Trotter.

A 3 by Grisham with :25 left had Cabot within a point, 53-52. The Lady Panthers’ press forced a turnover as Bryant struggled to get the ball inbounds against that defense. Wagner converted twice at the line to put her team ahead, 54-53 with :20.5 showing.

Another Bryant turnover led to a trip to the line for Wagner who hit the first shot but missed the second, leaving the door open for Bryant. Russ eventually got to the line and dropped both shots in to tie the game.

In overtime, Russ hit two more free throws and, off a steal by Martin, drove for a basket. The flurry continued with Walker’s steal and layup to make it 61-55. Off another Cabot turnover, Russ found her way to the line again as Belin fouled out. Her free throw made it 62-55 with 1:30 to go.

The game was unusual, in addition to the bevy of turnovers, both team hit the offensive glass hart. Bryant had a whopping 17 boards on the offensive end, but Cabot trumped that with 21.