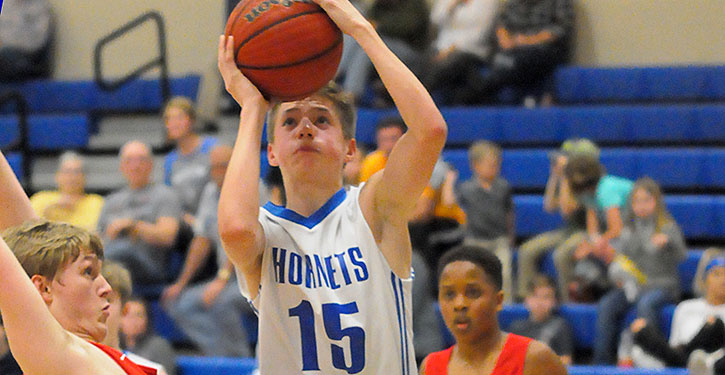 Blue Hornets battle but fall short at the end vs. Panthers

The Bryant Blue Hornets eighth-grade team of Bethel Middle School battled to the end but, in their season finale at home against the Cabot North Panthers, they came up short at the end, 38-32.

The Hornets fell behind 10-0 by the end of the first quarter but out-scored the Panthers 14-5 in the second stanza to get back into the game. They trailed 15-14 at the half.

“After the first quarter, I thought we had thrown in the towel for the season,” allowed Hornets coach Steve Wilson. “We found a spark in the second quarter to get back in the game and played it close the rest of the game, taking the lead a couple of times.”

Cabot North held a 29-27 edge going into the fourth quarter then hit five of six free throws down the stretch to hang on for the win.

James Billingsley led the Hornets with 15 points including a trio of 3-pointers. He had 8 in the third quarter. Evan Lamb added 7 points, Alex Skelley 6. Destin Jenkins hit a 3 and Carson Nagle tacked on a free throw.

“Evan Lamb came in off the bench and battled on the boards for us,” Wilson noted.