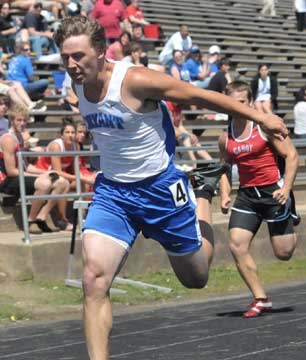 LITTLE ROCK — The Bryant Hornets earned first place finishes in four events Saturday in the 7A Central Conference track and field championships at Scott Field, but it wasn’t enough as Conway used superior depth to earn the conference title.

The Hornets placed third behind Conway (155 pts.) and Cabot (137.5). The Hornets third place total of 114 points is the highest total for Bryant at a conference track meet in recent memory.

“I’m really proud of how the guys competed,” commented Hornets coach Steve Oury. “The conditions were really tough, with winds blowing at over 30 miles per hour for much of the day. Having a conference meet in one day is really tough and, to be honest, it’s not fair to the athletes. The 7A-West had a two-day meet and finished their meet on Thursday.[more]

“Regardless, I thought we competed with a lot of heart and we really dominated in the 100 and 200,” he continued. “We surpassed my expectations in those events. To have all four of our entrants make it to the finals and take first and second in both events is just awesome.” 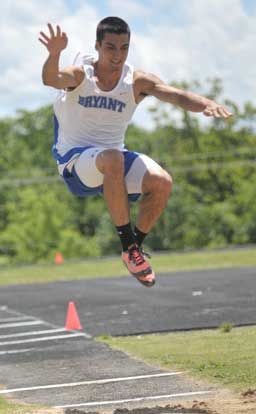 The quartet of Winfrey, Tolbert, Farr and Watson also won the 4×100 relay in a time of 43.06. Troy Smith added the fourth first-place finish for the Hornets by clearing six feet to win the long jump.

“We had some other areas where we didn’t have our best day, but in the end we scored about what I expected us to,” Oury said. “I knew we would have to have a perfect meet and a little luck to have a chance to win, but Conway is just too tough across the board. They don’t have any real weak events, and they also just had a really good day, so congratulations are certainly in order for them.”

The Hornets will have a strong contingent of athletes at the Class 7A State championship meet at the University of Arkansas in Fayetteville on Thursday, April 29. The top six finishers in each event qualified. 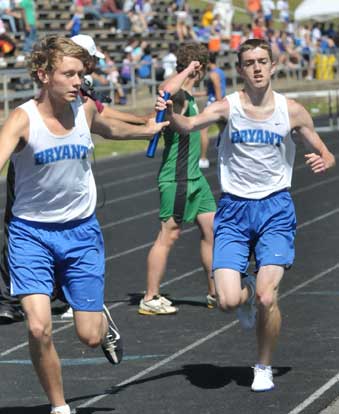 In the field events, Tolbert was third and Thomas fifth in the long jump. Tolbert leapt 20 feet, 7 inches and Thomas 19 feet, six inches. In the triple jump, Tolbert was fifth (41-0) and Dylan Blasi sixth (40-5).

The Hornets qualified in the other two relays as well. The 4×400 team of Blasi, Tyler Freshour, Farr and James Glasper finished third in 3:32.12. The 4×800 team of Colton Klaus, Jacob Clark, Logan Howard and Keith McDonald finished sixth in 8:56.81.

“Since we only have five days until State, we really don’t have time to do any significant training,” Oury noted. “Our focus will be on recovering from this meet and making sure our legs are back under us for Thursday. The facilities at the U of A are the best in the nation, so we are looking forward to the opportunity to compete up there.”