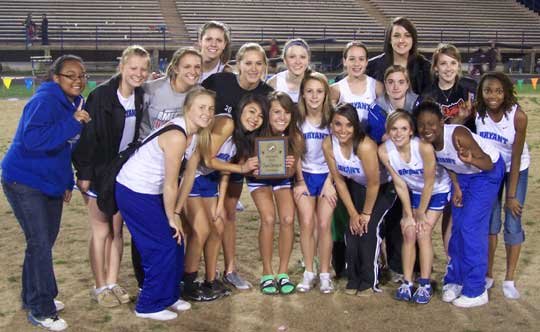 The Bryant track fans that stayed until the final event at the Bryant Hornet Relays Thursday night got treated to one fantastic finish as both the boys and girls teams won their respective meet championships with dramatic come-from-behind finishes.

Going into the final event, the 4×400 meter relay, the Lady Hornets trailed the Cabot Lady Panthers in the team standings by a single point, 100 to 101. That meant, the relay would include a race within a race. Everybody would be competing to win the event but Bryant’s quartet and Cabot’s foursome would be battling each other to finish ahead of the other and thus claim the meet’s team championship.

The Bryant relay team consisting of Bailey Seelinger, Morgan Seelinger, Jordan Chadwick, and Stacy Emmerling overcame a huge early lead by Cabot and finished second place with a time of 4:18.9 earning the Lady Hornets 8 points. Cabot finished just behind Bryant taking third place and earning 6 points so the Lady Hornets moved ahead in the team total to take the title by 1 point.[more] 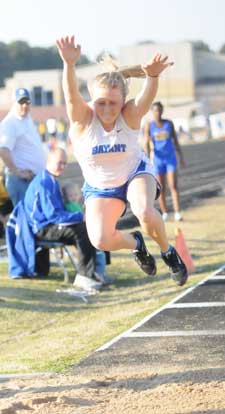 Bryant won with 108 points with Cabot taking runner-up with 107 points. There were 18 total teams in the meet.

“Our relay knew that all they had to do was beat Cabot and we could win the meet,” acknowledged Lady Hornets coach Danny Westbrook. “There was a lot of pressure on those four young ladies and I’m proud to say they came through in a huge way.

“They did a great job, but in a close meet like this, it takes a total team effort,” he added. “Every point was so crucial to the victory. I am so proud of this team and how they fought for every possible place in every event. This was truly a team victory tonight.”

Davidson added 10 points with her performances in the shot and disc. She threw the shot 32’8” to finish fourth and also finished fourth in the discus with a throw of 94’8”.

The Lady Hornets will return to competition on Tuesday, March 30, at the Panther Relays in Cabot.