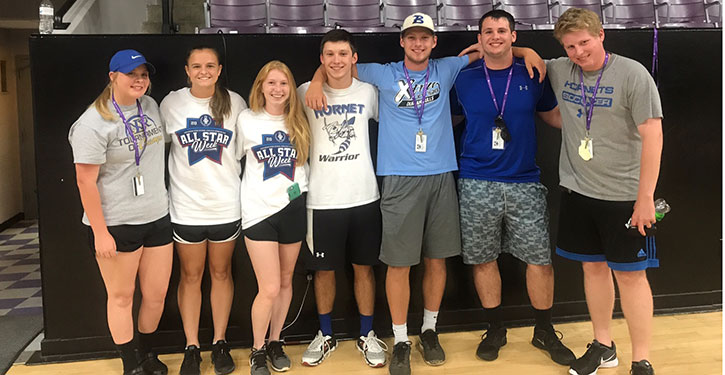 CONWAY — Seven athletes will be representing Bryant High School at the 2017 Arkansas High School Coaches Association All-Star games this week at the University of Central Arkansas in Conway.

On Tuesday, June 20, the Hornets’ Beaux Bonvillain will play in the all-Star baseball game at 5 p.m., at Bear Stadium, while the Lady Hornets’ Shelby Stuckey plays in the All-Star softball game with Bryant head coach Lisa Dreher serving as an assistant coach for the East team at Farris Field.

The week culminates with All-Star football game at Estes Stadium. The East All-Stars will include Bryant’s Hayden Knowles and Hayden Ray.

In January, it was announced too that Bryant would be represented on the cheerleading squad by Kaitlyn Baldwin and Ingrid Olsen as well as Presli Pendergrass on the dance team.

BHS trainers Christa Finney and Brandon Sitz were also selected to serve on the athletic training staff for the week.

Pictures above, from left, are Stuckey, Kennedy, Campbell, Ray, Bonvillain, Knowles and Sohn.