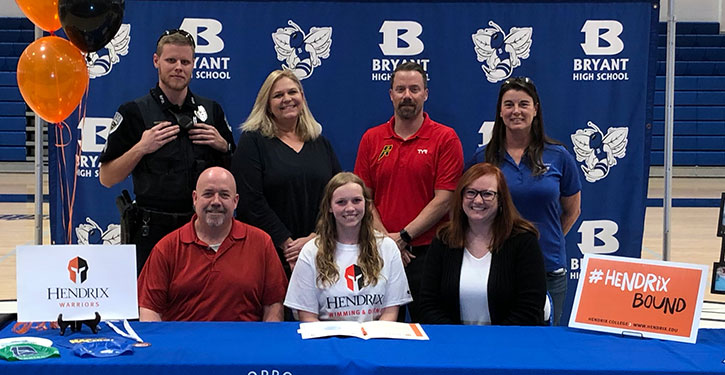 An injury can knock any athlete out of the water. And whether they come back to their sport or not depends on not only the severity of the injury, but the will of the athlete to compete again.

Hannah Tennison joined the Bryant High School swim team as a freshman. Her competitive swim career began when she was 5 years old.

“My sophomore year, I injured myself,” she recounted, referring to a foot injury that would eventually require surgery. “I didn’t know it would be a season-ending injury, but it was. So, I sat out my entire junior year and that was really rough. But now I’m working at it and I’m getting back.”

“She’s a good swimmer, a hard worker,” said Bryant swim coach Angel Dale. “Her injury has hurt her the last couple of years but the thing I like about her is that she fought back from that. She didn’t give up. She’s remained a member of the team.

“She’s done land stuff (sit-ups, push-ups, things you can do without hurting your foot) as she can and she’s really looking forward to her senior year,” the coach added.

And, in the first meet of the season at the Bishop Park Aquatic Center on Nov. 14, Tennison competed in the 200-yard medley relay, the 50-yard freestyle, the 100-yard backstroke and the 400-yard freestyle relay.

“She’s not satisfied with where her times are, but she hasn’t lost as much as most people would lose in that amount of time,” Dale said. “So, I’m very proud of her. And I think it speaks highly of her that she’s never satisfied with where she’s at. She always wants better.”

That determination and the results Tennison had shown prior to her injuries with the Arkansas Dolphins club team and the Lady Hornets drew interest from college programs. She had competed in both high school and USA Swim State meets.

It mattered too that Hannah had maintained excellence in the classroom.

As a result, on Wednesday, Tennison, the daughter of Brenda and Joseph Tennison, signed a national letter of intent to continue her academic and athletic career at Hendrix College in Conway. The scholarship money will come from her academics. Along with that, she received an invitation to join the swim team.

“Ever since my freshman year and even before I have tried to keep a 4.0 and above, just as a motivator for me,” Tennison related. “And to have something else to fall back on because sports are great but they’re not always going to be there for you.

“I chose Hendrix because their nursing program is really good,” she added. “I considered other colleges around Arkansas. I really didn’t want to go out of state, but I did consider other options. But as soon as I set foot on campus at Hendrix, it just felt like home.

“I love the fact that it’s a community,” she continued. “People from all over the United States come, even some from other countries. You never feel alone. There’s nothing that scared me. The teachers are very personable. It’s just a very well-rounded community.”

“Last year as soon as we could start, I got a contact from the coach asking me to come visit,” Tennison recalled. “I was very apprehensive at first, not knowing what to expect or what possibilities were ahead. But it happened very quick and it was very easy. They took me in like family and they said they would support me (through the injury), so that was another factor that really pushed me to choose Hendrix.”

She actually first competed in the Hendrix pool as a 10-year-old.

“I never really thought that I would make it this far in my career but then, as I kept going, it really changed,” Tennison related. “I hit a point where I knew I could do it.”

A former member of the CASC Racers in Bryant, Tennison said she really likes distance swimming.

“Five-free (500-yard freestyle) is probably my favorite,” she said. “Then, I enjoy 100-fly (100-yard butterfly) just because that’s something not everyone can do. So, it’s really fun to show people what you can do. And the competition in that event is very strong.”

This year, however, Dale needs her to work on other events.

“I’m swimming back (backstroke) and 50- to 100-free,” Tennison acknowledged. “It’s a change, definitely, because throughout my high school years I’ve swam five-free and multiple other events. Going from swimming 500 to not swimming that anymore, it was a hard change, but it’s been really good because it made me realize there’s more that I can do as an athlete. It’s really allowed me to find different things that I’m good at. I was just being in my one little world and not knowing what opportunities could lie ahead.”

At that point, Tennison said something that’s obviously a key to her success, past and future:

“The more challenges the better.”