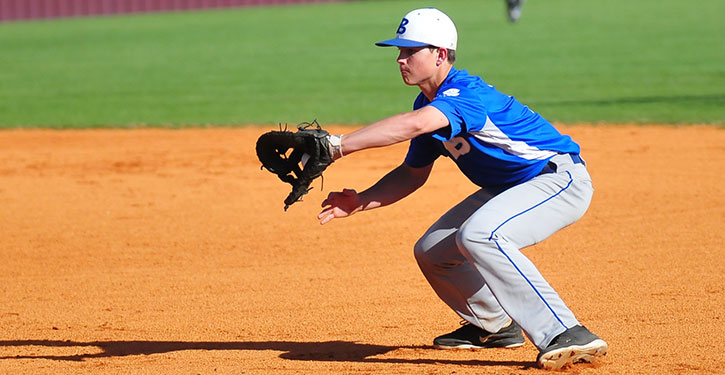 NORTH LITTLE ROCK — Over the last few years, the Bryant Hornets baseball team has hurt a lot of people’s feelings. They’ve calmly passed out a ton of frustration to their opponents as they won four State titles in seven years (including last season) and played deep into the playoffs every other season. Over the last three campaigns, the Hornets compiled a record of 92-7.

That’s a lot of losses for the other guys.

Perhaps no one has been more victimized by the Hornets than the North Little Rock Charging Wildcats along the way. Though the two teams didn’t play each other the last two seasons, North Little Rock came into Friday night’s 7A-Central Conference game riding an eight-game losing streak against Bryant. Since 2008, the Cats are 2-11 against the Hornets. Their last win in the series was on April 15, 2010.

That was part of a stretch in which that Bryant team lost 7 of 8 games. It looked like the Hornets had hit the skids and wouldn’t recover.

Yet, they got on a roll and ended the season on a 9-0 surge that included 8-2 and 3-2 wins over North Little Rock, the second of those, in fact, ended the Wildcats’ season. Bryant, meanwhile, went on to capture the program’s first State title, beating Van Buren 12-0 in five innings, in the finale.

So, one might expect that the Charging Wildcats, though none of them were really a part of that losing streak, might’ve been told about it. And, even if they weren’t — shucks, the defending State champion was coming to town.

They were fired up.

The Hornets, even less experienced than that 2010 team and a much different team than the 2016 champs (only one returning starter was in Friday’s line-up), have nevertheless withstood the weight of wearing the crown pretty well this season. At 11-5 overall, only one of their losses had been by more than two runs including three by a single run. The only lopsided loss was an 11-1 decision in Waco, Texas at the annual Midway Tournament on March 9.

Their second one came Friday night when North Little Rock took a 5-0 lead in the first two innings on the way to a 9-3 victory.

It was the Hornets’ second consecutive loss, both in conference play, coming off a 3-2 setback to Cabot. In both games, they were held to just three hits.

“We’re struggling,” admitted Bryant head coach Travis Queck, who was an assistant on that 2010 team. “We’re searching, trying to find a way to string together some hits. It’s just showing — some youth and inexperience.”

The Hornets figure to get rolling again and it may start Tuesday when they host Conway. That Midlothian loss was part of a three-game slide after a season-opening win over Arkadelphia. After a win and another setback, Bryant went on a nine-game winning streak.

It could happen again.

Friday, Seth Tucker (that lone returning starter) was on the mound against North Little Rock. The Hornets had staked out a 1-0 lead, a gift from the Wildcats. Tucker led off by reaching on an error by shortstop Zach Freeman. Logan Chambers sacrificed then, with two down, Jake Wright hit one to Freeman. This time, his throw pulled first baseman Ryan Maloch off the bag. Tucker hustled home and Wright, caught in a rundown, was tagged out after the run had scored.

In the home half, Tucker retired the first two batters and appeared to be on his way to an easy inning, coming within a strike before Nick Butler bounced a single up the middle.

“Coming one strike away is frustrating,” Queck acknowledged. “It seems like it was that way today a lot.”

Things snowballed from there. On the next pitch, Owen Stuckey shot a liner down the left-field line that was just fair, for an RBI double.

Tucker got a strike in on Chance Harger but his next delivery, a curveball didn’t break quite enough, glancing off Harger’s thigh. That brought up Maloch who got just enough of a 1-1 pitch to pop it into right-center just beyond the reach of second baseman Scott Schmidt, centerfielder Matthew Sandidge and right fielder Cameron Coleman.

That made it 2-0. An error loaded the bases but Tucker kept it to that by fanning Desmond Cordova.

North Little Rock starter Tucker Sparks worked around a two-out single by Schmidt in the top of the second. In the home half, Weston McGee’s single was misplayed in right, allowing him to get to second. Zach Freeman took a strike then surprised the Hornets with a good bunt that he beat out for a hit and McGee took third.

Chase Freeman was grazed by a pitch to fill the sacks and Butler delivered a sacrifice fly to make it 3-0. Stuckey followed with an RBI single. He took second when the Hornets missed the cut-off man.

Boston Heil relieved and struck out Harger. With two down, Maloch hit a grounder to the right side that Schmidt dove to get a glove on but couldn’t control. The base hit drove in the third run of the inning, making it 5-1.

Maloch, who was 4 for 4 on the day with four runs batted in, slugged a solo homer in the fifth after Heil had thwarted the Cats through the third and fourth innings. After the round-tripper, Heil pitched around a walk to keep it 6-1.

In the sixth, he set down the first two before a walk to Stuckey led to a three-run inning that included three Bryant errors and a Harger triple, before Coby Greiner relieved and got the final out.

Meanwhile, Sparks was handcuffing the Hornets. He pitched around an error to lead off the third and, after retiring eight in a row, worked through a two-out walk to Sandidge in the fifth.

The Hornets made some noise in the top of the sixth when they still trailed 6-1. Chambers beat out an infield hit. Though Coleman grounded into a force, the relay to first was errant, rolling into the dugout. Coleman was awarded second on one of five North Little Rock errors.

A walk to Wright and Brandon Hoover’s grounder to the right side put two in scoring position for Greiner who came through with a two-run single to left that chased Sparks.

Stuckey relieved and, though yet another error allowed Schmidt to reach, he got out of the inning when Myers Buck skied to right.

After the uprising by the Wildcats in the bottom of the sixth, the Hornets were retired in order in the seventh. 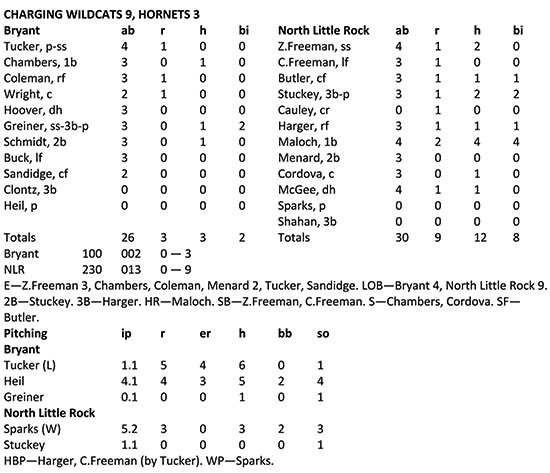