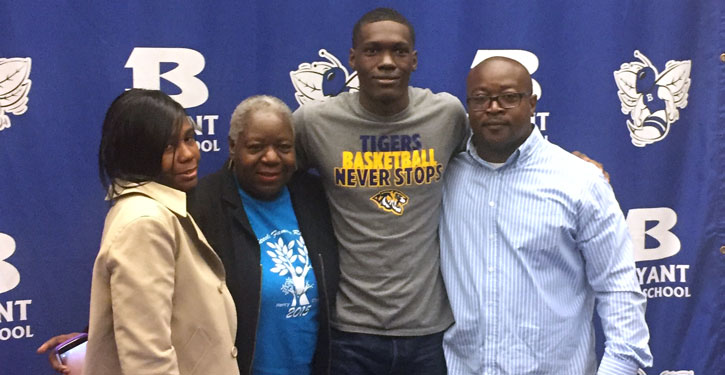 Coaches will tell you, as much as you teach your team to play solid defense and to step up and take a charge, it’s getting harder and harder to get the call even when you think you’re guy did everything he needed to.

So now, maybe more than ever, when a player sets up, takes the hit and gets rewarded for it, it’s a big deal. It often takes away points from the other team, nails the offensive player with a foul and fires up your team.

So it’s no small thing that Kaleb Turner took a charge over 20 times in his high school career.

“It’s like Coach A always says, it’s like a mindset,” Turner said on Friday, referring to Bryant head coach Mike Abrahamson. “You’ve just got to be there. Keep your head on a swivel and just take it, give up your body for the team. It just brings everybody energy. Everybody has a certain job and mine was like, bring the energy every game. That was one of the things I liked to bring to the team. It’s a lot of fun.”

Of course, Turner provided more than that and, on one of his best nights, Tony Romero, the head coach at Central Christian College, happened to be on hand.

On Friday, Turner, the son of Keric and Kim Turner, signed a letter of intent to continue his education and his basketball career on scholarship at the McPherson, Kansas school.

“They came to Jammin’ For Jackets,” Turner recalled.

In the second game of Jammin’ for Jackets, Turner scored 13 points and grabbed four rebounds (and he probably took a charge along the way) in a 69-59 win over Little Rock Episcopal Collegiate High School.

“He emailed me and asked me to come for an unofficial visit,” Turner continued. “I went and looked at the school campus and looked at the players and watched them practice and it was just like here. So I decided to go there.

“It was the community and the atmosphere,” he said of the choice of CCC. “Everybody was nice to each other. I liked that positive vibe it was giving.”

“We’re excited for Kaleb,” said Abrahamson. “He has given a lot to our program over the last three years. He got a chance, along with a lot of his senior teammates, to play a lot as a sophomore and got a lot of experience.

“He became a shooter and a driver and a defender, somebody we were able to plug in there a lot and use his athleticism,” he continued. “I used to really like to call on him as a trapper when we were trying to come back or take advantage of somebody. He was really good at that.

“We’re going to miss him,” the coach said. “We’re really happy for him to get this opportunity.”

Over his three years, Turner was one of the Hornets that showed the most improvement.

“Tenth grade, it was a learning process, following the lead behind Kevin (Hunt) because Kevin and Romen (Martin) had already been here,” he related. “It was a learning process the whole time. Junior year was like, all right, let’s put it all together and see what we can do. It turned out real good. Senior year, it was just go get it. It was disappointing that we didn’t win State but it was a fun year.”

“My teammates and my coaches and my trainers, they kept pushing me and telling me that I could do it,” Turner said of his improvement, “and that I had all the potential in the world, that I just needed to put my mind to it. I just kept working and working and working. Eventually somebody saw me and thought they could use me.”

And how will Central Christian use him?

“They’re getting an athlete,” Abrahamson said. “Somebody that I hope can make a difference in a lot of different areas, kind of a Swiss Army knife guy. He started off for us making a difference defensively. He was good at getting in the passing lanes and he was good at trapping. Then his game really evolved offensively where he became a good driver and a decent shooter for us. I think that’ll just get better in college.

“He’s a good team guy,” he added, “A high-character guy. Every adult on campus loves him and they’ve gone out of their way to tell me that. I have people track me down or people that I don’t know well, stop me or send me an email. K.T. has just made such an impression on everybody in the school because he’s such a good person and has such high character.”

Over the three years, the Hornets were 54-32 posting a winning record in each, something that hasn’t happened at Bryant since the 1980’s. They reached the State semifinals in 2015-16 then reached the quarterfinals in 2016-17.

“It was fun now that I look back at it but sometimes in practice, it was like, ‘Man, this is hard, I don’t know if I can make it,’” he admitted.

Asked what got him through it, Turner stated, “The passion for the game. I know if I stopped playing basketball, I don’t know where I’d be.”

Having stuck it out, he now knows where he will be and he likes it.