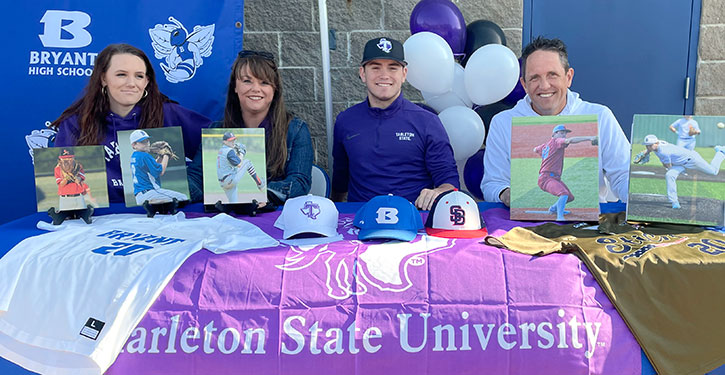 Just a few days after finishing the Bryant Hornets’ 2020-21 basketball season at the State Tournament, lefty Aiden Adams was on the mound facing the arch-rival Benton Panthers.

Hornets head baseball coach Travis Queck said he needed to see what he had so Adams was thrown right in the mix.

That was, in part, because of his competitiveness.

“He just has an edge about him,” said Queck on Thursday at a signing ceremony for Adams and Will Hathcote. Adams, the son of Tim and Keely Adams, signed to continue his baseball career and education at Tarleton State University in Stephenville, Texas.

“You could see that on the basketball court the last couple of years with Coach A (Hornets head basketball coach Mike Abrahamson),” Queck continued. “You knew there was a competitor in there.”

This spring’s debut was a welcome one for Adams. In 2020, he had just joined the team after basketball when the season was shut down due to the COVID-19 scare.

“We hate we lost him last year,” said Queck. “Even though the season didn’t start out as well last year, we knew we were getting some pieces back, but we never got that opportunity.”

A strong summer of work followed.

“Aiden had a great summer and definitely earned the opportunity,” said Queck.

“He commands multiple pitches for strikes,” the coach added. “Aiden throws a two- and four-seam fastball. He’s starting to work on a cutter that he can bury in to right-handers, a change-up and almost a slurve. Sometimes it’s a curveball and sometimes it’s a slider.

“Keeping the hitters off-balance,” he said. “He’s not going to blow you away with the velo although he has creeped up a bit over the years, which is really good. But the fact is, being a competitor. And that’s one thing he’s learned to do with multiple pitches.

“I would say his best pitch is that two-seam that runs. When he’s able to locate that and have an angle to the back leg of the right-handed hitters and have it break late into the zone, that is just nasty.

“It’s very tough and then he can use his change-up off of that or, if he gets them leaning over the plate, he shows that slider or curveball. So, he’s just learned how to pitch.”

There’s still a lot of the 2021 high school season and, no doubt, Adams will be right in the mix for everything the Hornets, now 13-1 so far, hope to do.

“Aiden is a guy that’s always asking questions, always trying to learn, always trying to better himself, put himself in a position to be successful,” Queck said. “Sometimes, he was so coachable that he would overwhelm himself with information. As a younger kid, that was probably his biggest crutch.

“And just simplifying over the years, over the summers, he’s kind of figured that out,” he concluded. “He’s become a very, very effective pitcher.”