Hornets turn tables on Panthers for 6th in a row

If the Bryant Hornets had the kind of crowd support in the Hornets’ Nest for every game that they had on Friday, Dec. 16, when the rival Benton Panthers visited, they’d be a lot tougher to beat at home.

The thing is, they’re going to be plenty tough as it is as the Panthers, who came in with a 10-1 record (the only loss against Little Rock Parkview which may be the best team in the state), found out.

The Hornets avenged a 53-49 loss at Benton on Nov. 22, with a rousing 52-49 victory, improving to 7-2 with their sixth consecutive win since that night at Benton.

Despite the loss, Bryant coaches Mark Smith and Chad Withers had insisted that their Hornets had played their best game of the season at Benton. They agreed that they trumped that effort on Friday, while maintaining that the team had the potential to be better down the road.

“We’re really proud of the kids,” Withers said. “We challenged them the last few days because we didn’t think we played very well at Sheridan (in a 45-42 win). I think they responded. I thought it was just a tremendous effort.

“I think we’ve got a chance, if we keep progressing, to do some things,” he added. “Just winning games is a plus for these kids considering where we’ve been and where we’re coming from. I hope they enjoy this feeling.”

Indeed, the Hornets’ seniors have only been a part of eight wins over the last two seasons. They’ll have a chance to match that total when they begin play against Lake Hamilton on Wednesday, Dec. 28, in the Spa City Classic at Summit Arena in Hot Springs.

The Hornets got a big boost from senior Chris Chumley, who scored a season-high 17 points.

“I’ve been struggling,” Chumley acknowledged. “I’ve done everything from shaving my facial hair, changing numbers — everything you can imagine — change socks, everything. And you know what? There’s no better way to come out here and to get out of the slump.”

“I’m really proud of Chris,” Withers said. “His confidence has been hurting a little bit. We’ve just been trying to pick him up, telling him, ‘You’ve got to put that stuff behind you.’ He responded and I know he’s excited.”

Of course, there’s no motivation for a Bryant player than to take on the Panthers.

“They’d been talking,” Chumley said. “”We’ve heard we couldn’t even hang in the same gym. We’ve heard everything they’ve got to say and it just builds the fire. It’s locker room motivation. So, we came out ready.”

“We played hard and we wanted it more,” chimed in senior Micah Farish who added 12 points. “That’s all there is to it. We beat Benton, that’s all that matters.”

Defense was a key, Withers said. At Benton, the Panthers hit 10 3-pointers. This time, they only made four in 21 tries.

“They shoot the ball so well,” he noted. “They struggled a little bit tonight. They got some looks that didn’t go in that probably normally go in but I thought we did a lot better job covering the 3 than we did over there. Over there, they hit six 3’s in the third quarter and that really hurt us. We’ve stressed that the last couple of days and I really think that we got out on them and did a pretty good job.”

The significance of the win and the Hornets’ streak was not lost on the players.

“Compared to where we were last year and where we are now, our confidence is rolling,” Farish insisted. “We have the confidence that nobody can stop us. It’s hard to lose when you’ve got that confidence.

“I think we’re here now, we’re on the map,” added Chumley. “This win put us on the map. It put us in a place to do good things. You know, we won one game in two years in conference. Now, I think we’re a team to beat in our conference.”

On Friday, the Hornets led most of the game. Benton got out to a 7-2 lead to start but the Hornets, sparked by Jeremy Nordman’s hot hand from 3-point range, went on a 13-0 run to end the opening quarter. Nordman, who scored 11 points in the game, knocked down a trio of triples including a buzzer-beater during the run.

Benton cut it to 5 early in the second quarter but Chumley, who didn’t miss a field goal attempt in the game, stepped out and drilled a 3. Chad Knight followed with a steal and layup then, after a Benton free throw, fed Chumley for a bucket inside to make it 22-11, the Hornets’ largest lead of the game.

A basket by Matt Brown and a three-point play by Dexter Hendrix, who would finish with 20 points, got Benton back within 22-16 at the half.

Hendrix, who had four old-fashioned three-point plays in the game, got another to start the second half, making it 22-19. Chumley hit the offensive glass to answer and, at the other end, Chase Shaw set up and absorbed Hendrix’ charge to the basket.

Though the Hornets’ turned the ball over, Shaw continued to badger the Panthers inside with his defense. Both Blake Torres and Donovan Clark had to alter their shots to get them away with the 6-5 Shaw in the vicinity.

In turn, Nordman made a nice feed to Chumley for another bucket.

Blake Ulmer, who pumped in 20 points including five 3’s at Benton, was limited to 6 points on Friday. He hit his only 3 at that point to cut Bryant’s lead to 26-22. But Nordman drove for a layup and, after he combined with Shaw to force a turnover, fed Chumley for a layup that bumped it back to an 8-point advantage.

Bryant led 31-25 going into the fourth quarter. Shaw hit two free throws and Farish made a steal and drove for a layup to start the final period and Bryant led by 10 again.

There was still a furious finish. With Hendrix doing most of the damage, the Panthers trimmed the lead to 3 on three occasions before the final score was set. With 4:16 left, Hendrix’ layup made it 43-40 but Chumley scored inside to answer. Nordman partially blocked a shot by Clark at the other end and sophomore Taylor Masters, subbing for one of the three Bryant starters that were carrying four fouls by then, scrambled after the rebound.

With 1:42 left, the Panthers had trimmed the margin to 48-45. And they got a chance to get closer when Masters was hit with a charging foul. Ulmer misfired but Matt Johnson rebounded for Benton. Knight, however, stripped Johnson of the ball and Farish was fouled with :449.9 to go.

Though Farish missed both shots, Phillip Porchay, who was held to 4 points in the game — all on crucial fourth-quarter free throws — skied for the rebound. But he was tied up and Benton regained possession and another chance to get even or within one.

Moments later, though, Farish scrambled after a loose ball, scrooped it up and drove to the other end for a layup that made it 5-point game going into the final 30 seconds.

“I just saw the ball loose, so I took it,” he recalled after the game.

Hendrix missed a 3-pointer but was fouled. Though it looked like the foul was after the shot on the blockout, he was awarded three shots. He made two and, with :16.1 left, Porchay was fouled.

The senior point guard calmly buried both shots and, with them, the Panthers’ chances of pulling out a victory.

When the final horn went off the Bryant students stormed the court to celebrate with their classmates and Christmas suddenly became just a little bit merrier in Bryant. 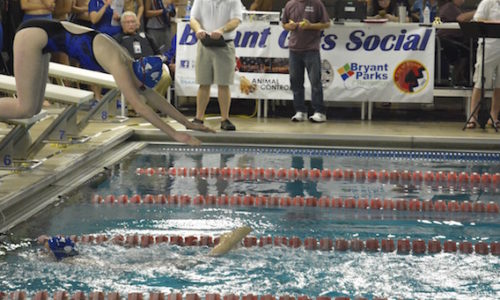