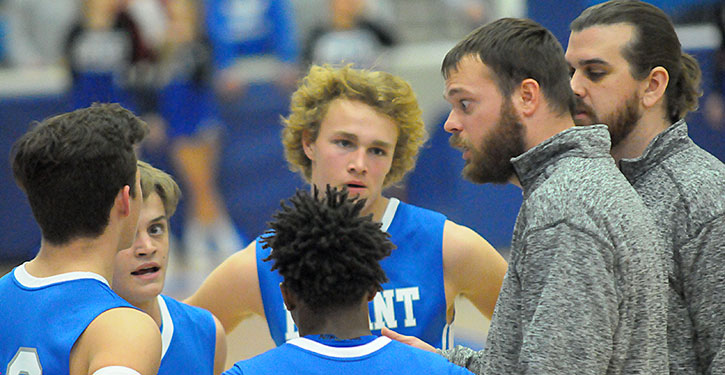 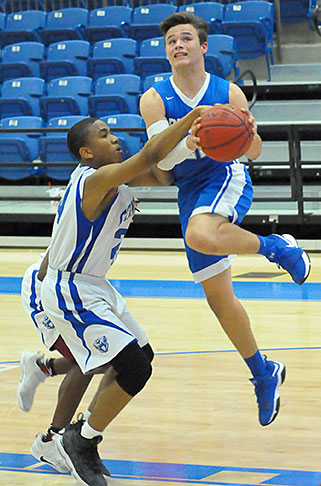 Austin Ledbetter gets hacked on the way to the hoop. (Photo by Kevin Nagle)

CONWAY — The Bryant Hornets freshman team pumped in 10 3-pointers including eight by Aiden Adams and led most of the game Thursday night. Until the final minute when the Conway Blue Wampus Cats snuck past them for a 52-49 gut-punch loss.

The Hornets committed eight of their 20 turnovers in the fourth quarter as Conway Blue rallied, erasing a 39-26 deficit late in the third quarter. Thanks to a baseline jumper by Hayden Schrader, his free throw with 3:49 left and Adams’ eighth triple at the 2:45 mark, the Hornets held onto the advantage.

They still led going into the final minute but the turnovers against the Conway Blue press continued to mount and, with :36 left, a basket by Jayden Williams gave the Cats a 50-48 lead.

Another turnover led to a chance at the free-throw line for Conway’s Mitchell Dunigan. But he missed the front end of the one-and-one with :17.9 showing.

At the other end, the Hornets worked to get a shot away. Austin Ledbetter found a crease down the left side of the lane and was fouled on the way to the bucket. With two free throws and just :07.1 showing on the clock, he missed the front end but made the second shot to make it a one-point game. 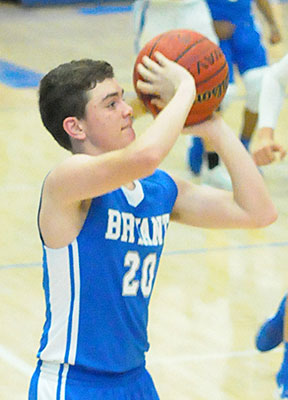 On the inbounds pass, Conway’s Jacoby Easly was fouled. He made both shots but the Hornets were still within 3. A long inbounds pass by Ledbetter, trying to get Adams one more shot was intercepted by Conway’s Donavan Nooner but he began to celebrate too soon and was called for traveling with :02.8 left.

After a Conway Blue timeout, the Hornets did a great job of getting the ball to Ryan Riggs right at the 3-point line on the left wing. He got the shot away despite being hacked on the left wrist. That altered the trajectory of the shot and it ricocheted high off the backboard, no good, as Bryant coaches Tyler Posey and Jonathan Rasburry along with Bryant fans protested to no avail.

It was a terribly frustrating finish for the Hornets, who got to the free-throw line just four times in the second half, half as many as Conway Blue.

On a three-man officiating crew, one ref was making about three-fourths of the calls and three-fourths of them were going Conway’s way. At one point, Posey had to walk away from the bench towards the stands to keep from saying too much. Of course, his team’s struggles against the press contributed to that as well. 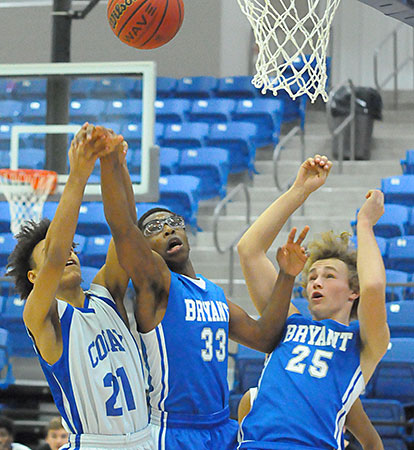 Conway Blue, which downed the Hornets 43-29 on Dec. 4 in Bryant, was fortunate to extract the win. The Cats improved to 10-3 in the Central Arkansas Junior High Conference as Bryant fell to 5-8 with two weeks left in the regular season. With four games left, the last three at home, the Hornets have a chance to move as high as fourth place in the league.

Along with Adams’ 24 points, Riggs had 7, Austin Schroeder 5, Gavin Brunson 4 with Ledbetter, Schrader and Jalen Montgomery scoring 3 each.

The Wampus Cats’ largest lead of the game was 5 late in the first quarter. An offensive-rebound basket by Brunson and two free throws by Schroeder in the final minute had the Hornets within 10-9 going into the second quarter. 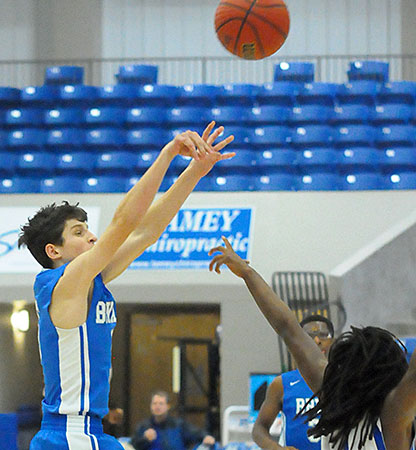 And when Adams opened the second quarter as he had the first, with a 3-pointer, Bryant led 12-10. Orr helped Conway Blue counter to regain the lead before a barrage of 3’s rained down. Adams hit one to put the Hornets back up 15-14.

Dunigan countered with one for the Cats only to have Adams crank it up again with back-to-back bombs that helped the Hornets begin to get some separation. Montgomery hit a free throw Brunson added a pair to push the lead to 24-17.

Orr hit the offensive glass for a bucket and Nooner scored and Bryant’s lead was 24-21 at the break.

Despite a full-court trap by the Cats, the Hornets extended the margin to start the third quarter. Adams drilled another trey then Riggs joined in with one to make it 30-21. Riggs’ layup off a turnover gave the Hornets their first double-digit lead. 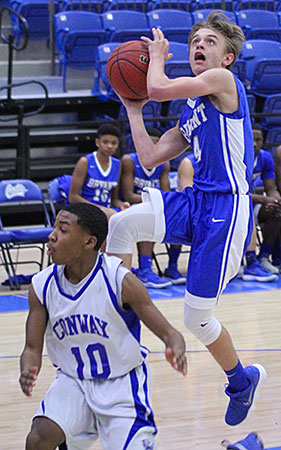 Ryan Riggs (4) finishes off a fast-break with a layup. (Photo courtesy of Paul Dotson)

After a Conway timeout, Orr hit a pair of free throws but Montgomery drove for a basket. Easly answered with a 3 but Ledbetter drove for a basket and Adams drilled a 3 to give Bryant its largest lead at 39-26.

Another bucket by Orr off an inbounds play under the Conway basket and a three-point play by Dunigan off a Hornet turnover cut it to 8 but Schroeder knocked down a triple to extend the margin to double digits one last time.

With a Dunigan basket to end the quarter as the ignition, Conway Blue went on a 9-0 run to get within 42-40 at the 5:20 mark of the fourth quarter. That’s when Schrader came through with his clutch basket and, after a pair of Wampus Cat misses, added his free throw to make it 45-40 with 3:49 left. His second shot rimmed out but went out of bounds off of Conway hands and it looked like the Hornets had regained the momentum.

But a turnover on a phantom illegal screen led to another basket by Dunigan.

Beating the Conway press, Montgomery pushed the ball up the floor and found Adams for his eighth triple and a 6-point advantage. 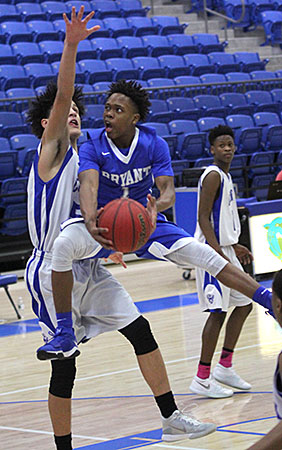 Williams hit the offensive glass to answer for the Cats then the Hornets spread the floor with under two minutes left, hoping to milk clock and shoot free throws.

But the fouls didn’t materialize. They didn’t get to the line and they didn’t score again until Ledbetter’s free throw with :07.1 left.

In the interim, turnovers occurred on four consecutive possessions, three of those in the backcourt set up easy buckets for Conway.

Bryant will return to action on Monday at Little Rock Catholic then start their string of home games against Russellville on Thursday, Feb. 1. They host Cabot South on Feb. 5 and Conway White on Feb. 8.