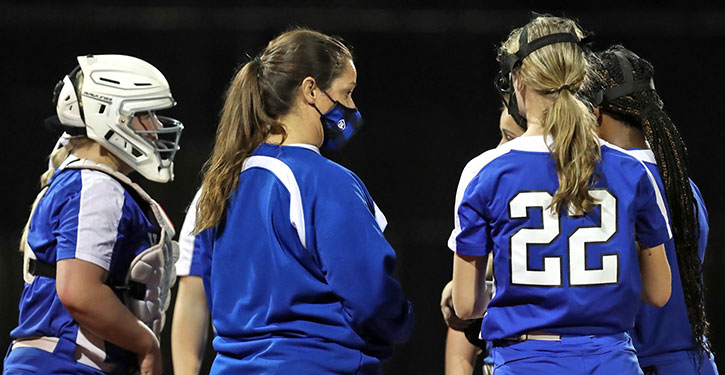 Hicks tosses one-hitter as Lady Hornets muscle up on Belles

After setting down the last 10 batters of the Bryant Lady Hornets’ 9-6 win at Fort Smith Northside on Tuesday, freshman Leah Hicks fired a one-hit shutout at the Mount St. Mary Academy Belles on Thursday. She was backed by 15 hits including six for extra bases in a 15-0 romp in four innings at the Lady Hornets’ Yard.

Alissa Suarez and Regan “Buddha” Dillon each went 3 for 3 at the plate. Each slugged home runs. Dillon also had a pair of doubles. Emma Bonvillain cracked a homer and Bella Herring tripled.

Bryant improved to 5-2 overall and 2-0 in the 6A-Central Conference going into spring break. They’re scheduled to play at the South Central Showdown this weekend. They return to conference play on Tuesday, March 30, at Little Rock Central.

Hicks struck out six without a walk. She did hit a batter. The Belles’ lone hit was a two-out single in the top of the first by Olivia Coppens.

Bryant grabbed a 6-0 lead in the bottom of the first. Macy Hoskins started the outburst by reaching on an error. Caitlin LaCerra sacrificed her to third and Suarez singled to left to make it 1-0.

After Suarez stole second, Abby Gentry singled to drive her home. And when the ball was misplayed in the outfield, Gentry hustled to second. That set the stage for Herring’s RBI triple.

Dillon doubled to make it 4-0 then Bonvillain smashed her home run to right to complete the scoring.

In the second, Suarez blasted her home to center after LaCerra had beaten out an infield hit and swiped second.

Dillon opened the bottom of the third with another double. With one out, Hicks hit a grounder to third that was misplayed. Dillon scored and Hicks wound up at second. Bailey Glenn, in as a courtesy runner for Dillon, raced home on Kallee Nichols’ infield hit. After Nichols stole second,  Hoskins yanked a single into left to make it 11-0.

A wild pitch allowed Hoskins to take second. She scored on a single by Suarez.

After Hicks struck out the side in the top of the fourth, the Lady Hornets made it a run-rule win in the bottom of the fourth. Dillon smacked her homer to open the inning. Bonvillain singled and Hicks reached when her pop up was dropped. Nichols drove in the game-ending run with a groundout.