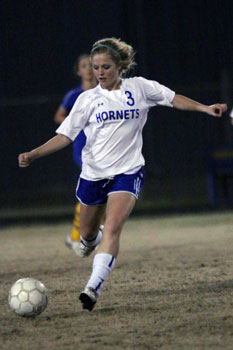 The Lady Hornets, who were coming off their only back-to-back losses of the season, improved to 5-3 overall and 2-3 in the 7A-Central Conference going into spring break. They’re set to return to action on Tuesday, March 31, at home against Mount St. Mary’s with leading scorer Lindsai Arceneaux set to return from a knee injury.

“The girls definitely picked it up,” noted head coach Doug Maxwell. “That was a lot more the style we saw early in the season. It’s exciting to see us get our combination play back together and start playing the ball to feed a little more and a little less kick ball, I guess.”

Bryant built a 2-0 lead by halftime. The first goal came in about the 24th minute. “Sarah Manning had an indirect kick from just outside the 18 on the left-hand side,” Maxwell recounted. “She found Lauren Reed, a freshman, on the back post and Lauren one-touched it in, beat the keeper.”

About 34 minutes in, Haley Montgomery and Amber Moskow combined on an attack. “Those two got the ball at midfield and just combined, pass, pass, pass back and forth,” noted the coach. “They split the defense, beat all the defenders then beat the keeper. It was a lot of one-touch play, perfect passing.”

Montgomery got the goal to make it 2-0.[more]

“North Little Rock only took two shots on goal the first half,” Maxwell said. “I was real pleased with the way we played.”

Seven minutes into the second half, Moskow gained possession at midfield and drove for the final goal. “She just took it herself,” said the coach. “She beat four defenders and the keeper then put the ball in the back right-hand side of the goal from 15 yards out.” 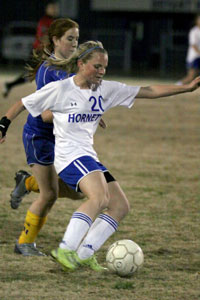 Of the shutout, Maxwell said, “The defense played really well. North Little Rock’s a very good team. They beat Russellville, played close against Little Rock Central and Mount St. Mary’s. They actually took Central to overtime. They’re definitely a good team and they tried to mix things up. They tried to play the ball up over the top but our defense did a very good job of retreating. Every time (a North Little Rock player) turned around and tried to find a way to split the defense, the defenders were beating them and reversing the ball which is something that hasn’t happened the last two games.

“We were actually a little more aggressive in getting to every ball in the air, getting to it first, beating them to a lot of balls,” he added.

Maxwell noted that his team was looking forward to taking on Mount St. Mary’s again.

“We lost a close one, 1-0, to them at Burns Park earlier on,” he recalled. “We had several balls, just unlucky balls bouncing off the posts. We just couldn’t find it. So we’re excited to have another shot at them. The offense is clicking pretty well and with Lindsai coming back, it’ll be great to be back at full strength.”