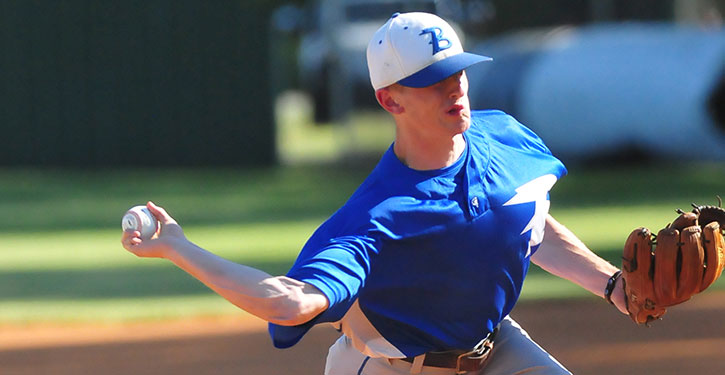 SHERIDAN — With their respective State tournaments looming, the Bryant Hornets visited the Sheridan Yellowjackets for a tune-up on Monday. Both teams got a lot of swings in against live unfamiliar pitching. Bryant got work for four pitchers and Sheridan used seven including a starter who had to come back and finish.

Ebbing and flowing with the intensity of the respective teams, Sheridan rolled early and Bryant got going late. The game ended with the potential tying run at the plate but the Yellowjackets held on for an 11-8 win.

The Hornets could probably blame the rival Benton Panthers for Sheridan’s early intensity. The Jackets rolled to a 14-0 record in winning their mixed 6A/5A conference including wins over Benton of 6-2 and 9-3. Favored to sweep the 6A-West Conference tournament, Sheridan, 28-5 overall entering Monday’s game with the Hornets, got stunned by the Panthers in the semifinals and instead of the expected No. 1 seed with its first-round bye, the Jackets will be a 3 seed for the Class 6A State Tournament in Benton Thursday.

The thing about Benton’s win was that Sheridan managed just one hit. This is the same team that had scored in double digits in seven games in a row and 12 of their last 18. To put it bluntly, the Jackets were embarrassed.

They came back to club Russellville into submission, 12-5, in the third-place game. And their intent was similar when they met the Hornets. Through four innings, they led 11-1 only to have the Hornets gamely put together a rally with three in the fifth and four in the seventh while Seth Tucker, the fourth Bryant pitcher, retired all six batters he faced over the last two frames.

A hint of the wild nature of the game came in the bottom of the first. Sheridan starter Tyler Cleveland had pitched around an infield hit by Cameron Coleman in the top of the inning. In the bottom half, Chance Wallingsford and Austyn Wright greeted Bryant’s sophomore starter Will McEntire with solid singles. Hunter Hicks, who was the Class 6A MVP as a freshman when the Jackets won the 6A State title two years ago, got a bunt down to sacrifice and when McEntire couldn’t make the play cleanly, he reached to load the bases.

McEntire then worked the fake-to-third, throw-to-first pickoff play to perfection but what ensued was, let’s say, unusual. First baseman Logan Chambers properly worked Hicks into a pickle and ran him to second which was occupied. When Hicks got there, Wright left the bag towards third. Chambers switched from Hicks to run Wright towards third where Wallingsford was stationed. When Wright got there, Wallingsford left the bag towards home. He was fully committed to his dash to the plate, so Chambers fired to Bryant catcher Jake Wright who came up the line to make the play. Wallingsford somehow evaded Wright’s tag but McEntire was where he needed to be, covering the plate. Wright fired a throw to his battery-mate and McEntire, who started the play with his third-to-first move, applied the tag for the out.

And it looked like he might get out of the inning unscathed when the runners held as David Rainwater bounced out to Scott Schmidt at second with the infield pulled in. But, on the very next pitch, David Vilches belted a three-run homer.

McEntire fanned Josh Pruitt to end the inning and the Hornets went to work to try to counter in the top of the second.

Coby Greiner ripped a single up the middle to get it started. Schmidt sacrificed him to second and, with two down, Myers Buck worked a walk. Konnor Clontz then drilled a double into the left-field corner. Buck tried to score by Sheridan worked an efficient relay home in time to end the inning.

In the bottom of the second, Sheridan’s Nick Whitley hit a lead-off homer. Cleveland singled but when McKinley Williams tied to sacrifice, McEntire made a nice play to catch it on the fly then fired to first to double up courtesy runner Clayton Palmer. Wallingsford popped out to end the inning.

Jake Wright blasted a double off the left-field fence for a two-out double in the top of the third but was stranded.

In the bottom of the third, McEntire finished up by working his way around a one-out double by Hicks. Tucker helped by running down a long fly to center off Vilches’ bat for the final out.

Wallingsford relieved for Sheridan in the fourth and pitched around a one-out error that had allowed Schmidt to reach.

Greiner relieved for Bryant in the bottom of the inning and Sheridan’s bats revved up again. Pruitt doubled, Whitley walked then Cleveland beat out a bunt single. Williams’ base hit to right drove in a run and moved Hornets coach Travis Queck to bring on Boston Heil. Wallingsford greeted him with a two-run single to left-center to make it 7-1.

Heil got the first out when Austyn Wright flew out but Hicks followed with another two-run single. Rainwater struck out but Vilches doubled in a run then scored on a single by Pruitt. Heil fanned Whitley to end the nightmare inning.

Rainwater took over on the mound for Sheridan and struck out the first man he faced. Two outs away from a run-rule loss, the Hornets came to life. Tucker’s grounder to short resulted in a wild throw. With the spacious foul territory on the Sheridan field, Tucker sprinted all the way to third. Coleman ripped a single up the middle to drive him home then Jake Wright and Chambers worked walks to load the bases.

Haydn Finley relieved for the Jackets and Greiner said hello with a two-run single to left. Brandon Hoover pinch hit at that point with runners at second and third and hit a sinking liner to center that looked like it might fall in for a two-run hit. But Williams dashed in and made a sliding catch. Greiner, certain that the ball would fall in, had headed towards third so, when Williams made the circus grab, he threw to second before Greiner could retrace his steps, for a inning-ending doubleplay.

Tucker took over on the mound in the bottom of the fifth and waded through the 8-9-1 spots in the Sheridan order. Ruston Johnson retired the Hornets in order in the sixth, however.

Again, the Jackets couldn’t muster anything against Tucker in the bottom of the sixth and, with the hard-throwing Vilches on the bump, the Hornets’ came to bat in the top of the seventh.

Vilches walked Tucker and Coleman then hit Jake Wright with a pitch to load the bases. Tucker scored when Chambers grounded into a force at second. Greiner followed with his third hit, a single that drove in his third run to make it 11-6.

A wild pitch moved runners to second and third before Hoover stroke another sinking liner to right center. Montana Korte, in for Austyn Wright, got to the ball but dropped it. Chambers and Greiner scored and Hoover wound up at second.

With the Hornets within 11-8, Dalton Domrase relieved for the Jackets and proceeded to walk Matthew Sandidge to bring the potential tying run to the plate with one out.

That’s when Sheridan brought back Cleveland to face Buck, who made a bid for a base hit but was thrown out at first by Hicks at second as runners moved to second and third.

With Austyn Wright back in the game in right for Korte, Clontz tested him but Wright made the running catch to end the game.

The Hornets, 17-9 this season, open 7A State play on Thursday at noon against Springdale at Bentonville High School.