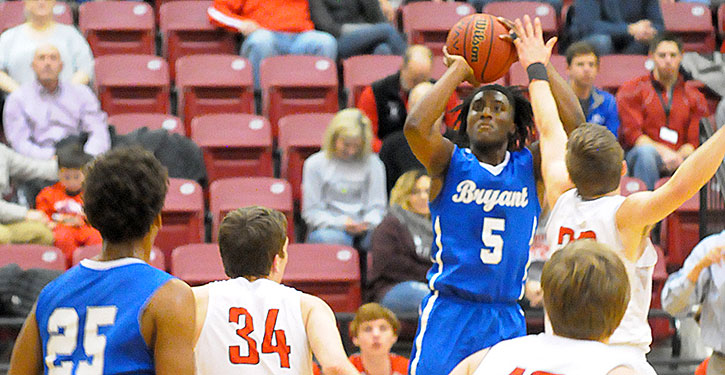 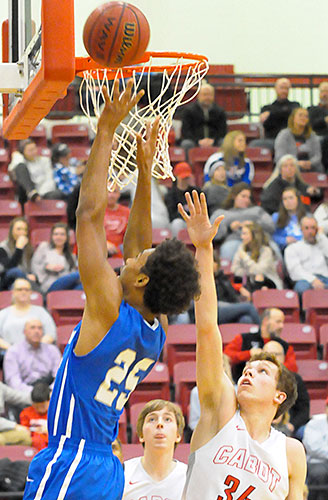 Catrell Wallace picks up a basket in front of Cabot’s Noah Allgood (34). (Photo by Kevin Nagle)

CABOT — With 3:47 left in Friday’s 7A-Central Conference game, the Cabot Panthers held a 40-27 lead over the Bryant Hornets. But sparked by their trapping press, Bryant forced eight fourth-quarter turnovers and, by speeding up the game, improved its shooting.

They came all the way back, tying the game at 44 on a layup by Camren Hunter with :46.1 on the clock. Sam Chumley made his fourth steal and the Hornets worked the clock to :21.2 and took a timeout, setting it up for Khalen Robinson to take the last shot.

Given an opening at the top of the key, Robinson drove into the lane and pulled up from 8 feet out and nailed a go-ahead jumper with :06 to go. He finished with a game-high 22 points.

Cabot called timeout and wound up getting a decent look at a last-second 3 but Landon Vaught’s 28-footer rattled the rim and came out as the Hornets extracted a stunning 46-44 victory.

The loss was the second this week for Cabot, which had made up its game from Tuesday’s snow-cancellation and lost to Little Rock Central on Wednesday. The Panthers are 14-5 overall now and 2-3 in league play.

The Hornets improved to 11-6 and 2-2 going into a showdown with first-place North Little Rock at home on Tuesday. 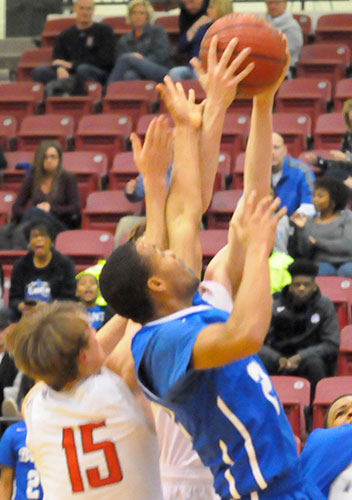 Deron Canada fights for a rebound. (Photo by Kevin Nagle)

“Momentum, I believe, is only real if you make it real,” said Bryant head coach Mike Abrahamson. “It sure seemed real tonight. We’ve been a part of comebacks and we’ve been a part of teams coming back on us. So, I know what it’s like on both sides.

“The thing about us, the press and the pressure — that’s the way I like to play,” he related. “But what we need is reliable depth. We need a couple of guys to step up off the bench to where we feel like we can do that more.

It had been a struggle for the Hornets to score against the Panthers’ man-to-man defense. With great off-side help, the Panthers could over-play, cutting off driving lanes while keeping pressure on Bryant’s ball-handlers.

Through three quarters, the Hornets, relegated to mostly perimeter shooting, had hit just 33 percent of its shots (8 of 24) and had been to the free-throw line just once. 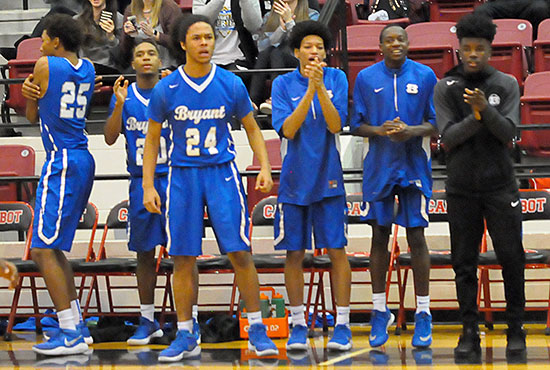 Foul trouble in the first half didn’t help either as seniors Sam Chumley and Deron Canada both picked up two early and went to the bench. Senior Alan Coleman got some early time off the bench as did sophomore Catrell Wallace, the usual sixth man.

“It was such an ugly game from our standpoint,” Abrahamson said. “Sam and Deron go out early and it’s adjusting on the fly and trying to hold it together.”

The Hornets led most of the first quarter before Jalen Brown hit a 3 with 2:05 left to put the Panthers ahead 13-10.

A three-point play from Noah Allgood, who had 20 points and six rebounds, increased the margin as the second quarter unfolded. Robinson answered with a 3-point jumper. Hunter fed Wallace for a basket and it was 16-15 with 4:47 left in the second quarter.

But that was the last of Bryant’s scoring in the half. Brown was fouled on a 3-point shot for the second time in the game at the 4:16 mark. He knocked down two of the three free throws and Cabot managed to push out to a 22-15 advantage at the break.

“I actually felt good at halftime considering how our situation with the foul trouble and fouling Brown twice on 3-point shots and just really not shooting the ball well and not giving ourselves opportunities for more looks,” Abrahamson said. “We weren’t even going to the offensive glass. So, all things considered, I didn’t feel like we were in a bad spot.”

Canada opened the second half with a 3 but before he could hit another one with 3:34 left in the quarter, Cabot built the lead up to 10. Allgood hit a layup off a feed from Brown then Vaught scored on back-to-back possessions for the Panthers.

The Panthers’ lead was 34-23 going into the fourth quarter.

Abrahamson had his team jump into its trapping press with just over seven minutes left to play. Cabot called a timeout to escape a solid trap near the sideline. When play resumed, Allgood got free for a layup but Robinson nailed a triple in response. Cabot then had turnovers on three consecutive possessions. All the Hornets could get out of the sequence was a free throw from Robinson with 5:16 to go.

Robinson’s second troika of the quarter began the rally, though Brown hit a short jumper moments later. Canada canned a trey then Chumley made a steal that led to a three-point play for Robinson on a drive to the rack.

That cut the lead to 42-36. And when Cabot’s Christian Weis missed the front end of a one-and-one with 2:28 to go, the Hornets had a chance to get closer.

A tip-in by Chumley made it a 4-point game. The Hornets forced a 10-second backcourt violation and took advantage of the opportunity with two free throws by the tenacious Robinson, who was fouled on his second offensive rebound and third shot with 1:42 to go.

Allgood hit two free throws to make it a 4-point advantage. Cabot took a timeout but, with 1:01 left in regulation, Canada was fouled and drained both ends of the bonus opportunity.

Suddenly, it was a 2-point game.

Rodney Lambert came up with a loose ball as the Panthers struggled against the Hornets’ trapping match-up. That led to Hunter’s layup and a tie game.

“As I’ve said before, a couple of easy baskets can really change the way the game is played and can really benefit your team in terms of their confidence to hit other shots,” Abrahamson said. “I think that’s what we saw here at the end.”

The Hornets actually doubled their score in the fourth quarter.

“It was a real exciting game for the fans, our fans, I hope,” stated the coach. “I’m really proud of our team; their resilience. Down 13 with three to go? We just kept going.”