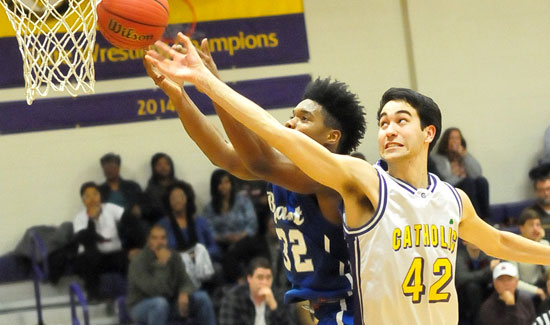 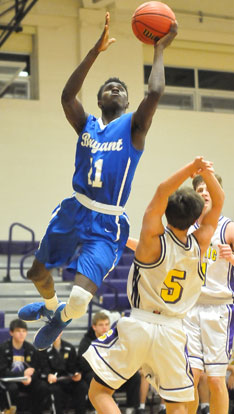 Kevin Hunt scores over Catholic’s Austin Alsbrook (5) on his way to a 33-point night. (Photo by Kevin Nagle)

LITTLE ROCK — Back on Dec. 3, just three games into the season, the Bryant Hornets met the Catholic Rockets in the first round of the Central Arkansas Christian Academy Invitational Tournament. The Hornets were flying high after a 58-43 win over Rogers Heritage, avenging a State Tournament loss that ended their 2014-15 season. The Rockets were without 6-10 post Brian Beckwith and lost senior point guard Chad Wharton during the game. The result was a 63-31 win for the Hornets.

At the time, Bryant head coach Mike Abrahamson warned that there shouldn’t be too much read into the score. It would be a different Rockets team when the two met in 7A/6A-Central Conference play.

And, sure enough, when the two tangled at Catholic on Tuesday night, the Hornets had their hands full even though they came in with an 11-3 record overall and the Rockets were 1-10.

Catholic led 14-8 after a quarter and 30-28 at the half. But behind a 33-point performance by senior Kevin Hunt, the Hornets surged to a 58-53 win. Bryant hit 9 of 12 free throws in the final period to preserve their lead, which was 40-37 after the third quarter.

“I think one of the worst things for this game for us was how we beat them last time,” acknowledged Abrahamson. “I can tell these kids all I want how different (the Rockets) are and how improved they are. They’re teenagers and all they remember is that (score).

“They’re a lot better,” he said. “Our guys have got to give the credit to them. I don’t think we played particularly well but a lot of that has to do with how well Catholic played. They got their big kid (Beckwith) back. (Jack Mathis) was awesome. (Wharton) didn’t play the second half the first time we played them. He was really good. 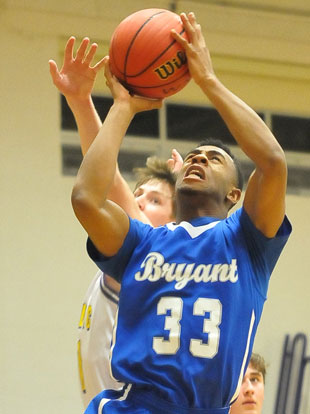 Romen Martin gets inside of a Catholic defender for a bucket. (Photo by Kevin Nagle)

“So we’re fortunate to get out of here with a win,” the coach insisted. “We’re fortunate because they smacked us in the mouth at the beginning of the game, killed us down low. We couldn’t turn them over. We couldn’t speed them up. Give our kids credit for just hanging in there and sticking to the plan. They keep adjusting. They keep responding to challenges. As long as we keep doing that, I like our chances.”

Beckwith scored 6 points in the first quarter and Mathis 3. Noah Basham added 4 for the Rockets. But the Hornets held Beckwith to just 2 points the rest of the game. Mathis, however, went on to score 18 in the game. Wharton had 9, Basham 8 and Drake Enderlin 7.

Hunt only had 2 in the opening period. But he scored 16 of Bryant’s 20 points in the second quarter.

“He was super aggressive and was on another level, just like he can be,” Abrahamson said. “He played like a senior. He played like a college player. That helps. He was amazing tonight.”

“We tried some new defenses and I don’t think we’re as comfortable with them as we will be in the future but, at the same time, that kind of won us the game too,” Abrahamson said. “It was just an adjustment at the beginning to work out some of the kinks. Some of the kids — even though it’s simple — until they do it, they react a little slow and they get a little conservative. We just had to speed them up a little bit more. 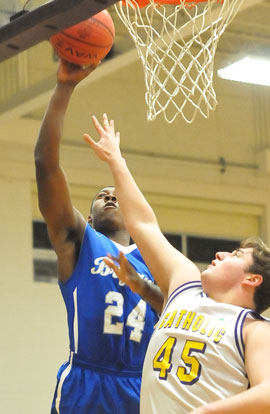 Hunt hit two free throws and Washington scored to counter a free throw by Mathis and a bucket from Enderlin early in the fourth quarter. Steen canned a jump hook to make it 46-40 with 4:39 left.

Mathis scored inside but, moments later, Hunt got a nice kickout from Martin and drained his second 3 of the night. And when Hunt grabbed an offensive rebound and scored with 2:58 to go, the Hornets were up by 9. After Enderlin missed the front end of a one-and-one, Hunt added two free throws that gave the Hornets their largest lead at 53-42.

Free throws by Mathis and Wharton whittled on the margin. Martin converted once at the line but Wharton drove for a basket to make it 54-48. Steen knocked down a free throw but Wharton buried a 3 to squeeze the margin to 55-51 with :23 left.

But Martin delivered twice from the line and Calvin Allen added one in the final :20 to put the game out of reach.

The game was a double conference win, not only counting in the league standings but provided the Hornets their first step towards making the State tournament. Only league games against 7A teams count towards qualifying.

They’ll get another chance at a 7A foe on Friday when they host Van Buren, the fifth-ranked team in the state (by the Arkansas Democrat-Gazette), with 6-11 star Mitchell Smith. 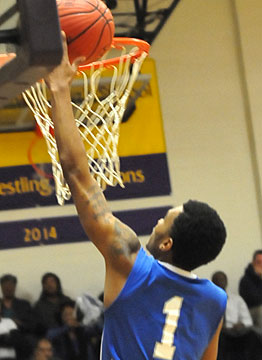 Detavious Moore lays up a shot. (Photo by Kevin Nagle)