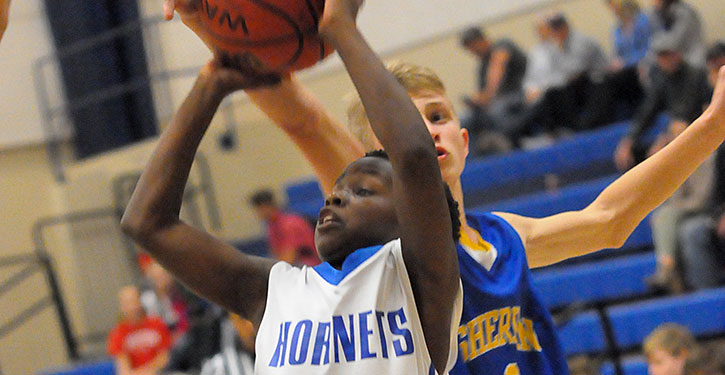 Jackets prove to be tough assignment for Bryant Blue

The Bryant Blue Hornets eighth-grade team of Bethel Middle School concluded the pre-Christmas/New Year portion of its schedule Tuesday night with a tough 42-26 loss to the Sheridan Yellowjackets eighth grade at the Bethel gym.

“Sheridan has a very talented team and threatened to blow us out early,” noted Hornets coach Steve Wilson. “They jumped on us early to go up 11-0. But we closed to 5 at the end of the quarter. I thought our kids played with a lot of heart throughout.”

After trailing 11-6 at the end of the first quarter, the Hornets fell behind 27-13 by halftime. It was 38-19 going into the fourth quarter.

Elijah Thompson led the Hornets with 9 points including 7 of 10 at the free-throw line. Destin Jenkins had 5 including a third-quarter 3. James Billingsley and Devin Love added 4 apiece. Alex Skelley hit a 3 and Evan Lamb added a free throw.