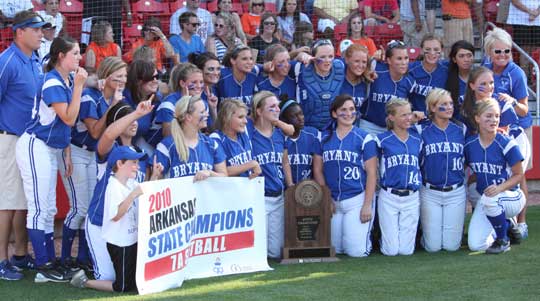 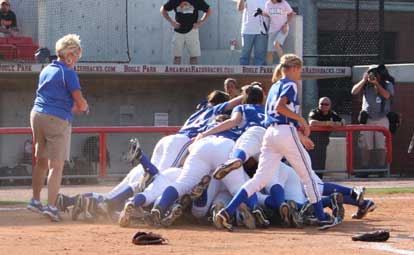 Lady Hornets are ‘beastly’ as they capture Class 7A State championship

FAYETTEVILLE — Debbie Stepp’s “beasts” of Bryant invaded the hills of northwest Arkansas on Saturday and overwhelmed the Bentonville Tigers.

The Bryant Lady Hornets mashed four home runs, three doubles and 20 hits altogether on the way to a 13-4 romp to capture their first Class 7A State softball championship, a day after the Hornets baseball team had secured their first 7A-title.

There had been three State titles for Bryant slow-pitch teams in the 1990’s. In fact, this team, at times this year, hit in fast pitch like it was slow pitch and Saturday was one of those times.[more] 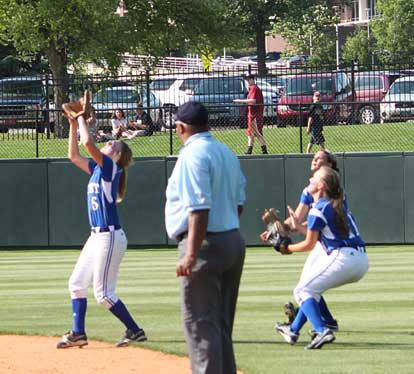 The Lady Hornets finish the season with a sparkling 26-2 record, winning their last 11 in a row. Bentonville, champions of the 7A-West, finishes 23-6.

“Bentonville is a good team,” Stepp said. “They are very well coached and I have a great respect for Coach (Kent) Early and Bentonville.”

Three of the Bryant homers were by the usual “beasts” but the spark came from a ‘beast’ in training, you might say. Freshman Hannah Rice led off the top of the fourth inning with her first-ever over-the-fence home run to snap a 4-4 tie and begin the onslaught.

Before the frame was over Cassidy Wilson clubbed a two-run shot. In the sixth, Jessie Taylor blasted another two-run bomb.

In the seventh, in the last at-bat of her high school career, Shanika Johnson, the lone senior on the Bryant team, provided the crowning blow, a monster blast to the second fence in left field at the University of Arkansas’ Bogle Park. She provided the final three runs. 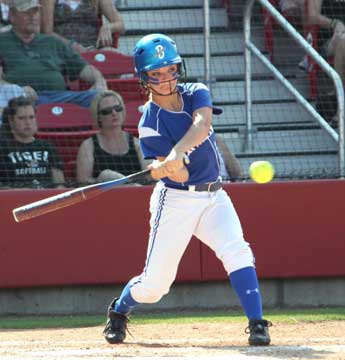 Stepp recalled, “I pulled her over and I said, ‘This is probably your last at-bat. This is what you played your entire life for.’ I said, ‘You get up there and do what I know you can do.’ And she stroked it.”

“It couldn’t have ended any better than that,” Johnson admitted. “Every softball player dreams about this. You never really think it’s going to happen until it happens but it was a dream come true.”

In the fifth, Johnson had been thrown out trying to score in a bases-loaded situation and hurt her ankle enough to be helped off the field.

“But I wasn’t coming out of the game,” she stated afterward. “It hurt really bad but I was trying to keep them from getting a doubleplay. I tried to knock (the catcher) down but I hurt my ankle.” 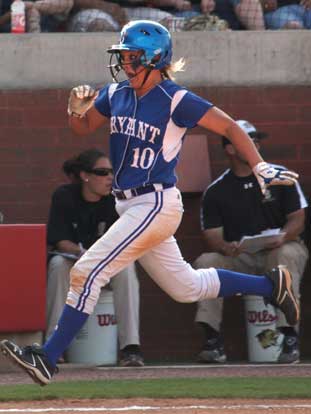 “I knew we had to hit to win,” Stepp said. “They have proved to me over and over again that they are the Bryant beasts. That’s what I lovingly called them at the beginning of the season. I’ve been around a lot of small ball so this has been an incredible year to have as many hitters in the lineup that can really hit. I told them that our goal is for 7-8-9 to be as feared as much as 3-4-5. And my No. 9 hitter, the freshman (Rice), hit that (tie-breaking) home run.

“It’s just amazing to me that two, three, four, five, six and then the last few games seven, eight and nine have been coming through and hitting the ball — and not just hit it but crushing the ball. I believe it’s because they want it and because they work really hard. They give a lot of time outside of just our school practice time and it shows.

“I’ve had some good hitters before but this is a group of them like I’ve never had,” Stepp said.

After a shaky start that included the return of an old nemesis — the illegal pitch (for leaping) — Peyton Jenkins shut out the Tigers on four hits over the final six innings. She struck out five and walked just one in the game and finished by retiring the last nine batters she faced, thanks in part to some eye-popping defense from Kelsie Works in center and Johnson at third. She held Bentonville’s slugger Alex Sullivan, who set a state record with 14 home runs this season, to a 1 for 4 day with two strikeouts including the one that ended the game and began the Bryant celebration. 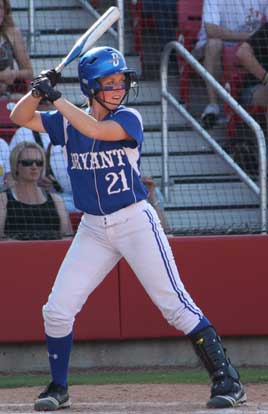 Jenkins was the winning pitcher in all three of Bryant’s State tourney games and was named the tournament MVP.

Bryant took a 4-0 lead in the top of the first off Bentonville’s Kaisha Arnold. Bruick walked, Wilson sacrificed her to second then Jenkins looped a single to center to put runners at the corners. Taylor laced a liner to center for an RBI single. A base hit by Sory to center loaded the bases for Johnson, who delivered a sacrifice fly. Chaloner followed with a roller to short that drew a rushed throw to first that allowed Jenkins and courtesy runner McKenzie Rice to score.

But Bentonville took advantage of some Bryant miscues to tie it in the bottom of the inning. The speedy Meg McGuirt beat out an infield hit and raced to third on a single by Whittley Johnson. When Johnson stole second, it drew an throw in the dirt which allowed McGuirt to come home. Johnson took third on a wild pitch then Jenkins hit Kali Piha with an 0-2 delivery.

Piha started to steal second but went back to first. Taylor fired a throw that Jenkins tried to catch but couldn’t. The ball got loose and Johnson scored from third.

Then came a sudden barrage of illegal pitches for leaping off the pitching rubber on her push towards the plate. Before the game when Jenkins was warming up in the bullpen, Stepp had squatted down and held onto Jenkins’ trailing foot to help her remember to keep it down.

But a pair of calls allowed Piha to advance to second then to third as Jenkins struck out Sullivan and got Kate Lacina to bounce back to her.

Alexandria Cooper, on a 3-2 count, singled to left to get Piha home. A base hit by Lauren Sullivan put runners at first and second with Macey Brake at the plate. Two more illegal pitches were called, allowing Cooper to score and Sullivan to reach third but Jenkins struck out Brake to end the inning with the game tied and the go-ahead run stranded at third. 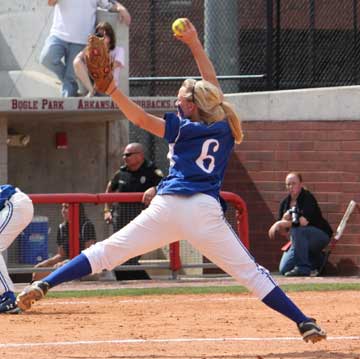 It was all-too-reminiscient of Bryant’s State championship appearance against North Little Rock last spring. Jenkins, a freshman then, was called repeatedly for leaping and it shook her up. She has worked diligently to overcome the problem but here it was cropping up again.

This time, however, she didn’t let it get to her.

“In a way, I guess I was kind of shocked at myself that I was doing it,” Jenkins related after the game. “But I guess I wasn’t as focused on my toe as I thought I was. I had to go back and fix it a lot and really think about it more than I wanted to, slow down my pitches a little bit and work on my mechanics instead of where my pitches were going.”

“That’s not ever easy,” Stepp commented. “We talk all the time about controllables and uncontrollables and she knows there are certain parts of the game she has no control over. So we work a lot on mental toughness, all of them. That’s the only way you can get through that kind of pressure situation.”

After the first, Jenkins was cited just twice more. In the second with the score still tied, McGuirt reached on a one-out error and Johnson singled. With Piha at the plate, an illegal pitch allowed the runners to advance to second and third but Jenkins bore down and struck out Piha and got Alex Sullivan to pop to Shanika Johnson outside the third-base line to end the inning. 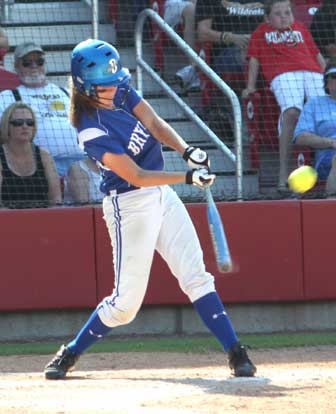 In the third, Johnson snagged two line drives at third, the second in spectacular fashion after Cooper had blooped a single to right. Brake popped to Sory to end the inning.

“They came hard but I’ve been practicing this all year to get balls like that and field them clean, snag them,” Johnson said.

By then, the Lady Hornets had managed to get their feet back under them just like their pitcher.

Stepp acknowledged that the first inning struggles for both teams were mostly due to nervousness.

“That’s why you play seven innings, thank goodness,” she added. “I really felt like, by the third inning, we had calmed down. I thought Peyton had gotten into her groove. When they came off in the fourth inning I said, ‘Guys, I’m feeling good here. I think you’ve got command of your nerves and everything’s good, so let’s play like that. And we opened it up.”

With one out, it was the freshman Rice who went downtown with a 3-2 pitch. Bruick beat out an infield hit then Wilson, on the very next pitch, unloaded to make it 7-4.

In the bottom of the inning, McGuirt slapped a single to left with one out then stole second. Whittley Johnson popped out to Bruick at second. With Piha up, McGuirt, who set a state record for stolen bases in a career, tried to swipe third on a pitch in the dirt only to have Taylor scoop it up and rocket a throw to third in time for the out, ending the inning.

The Lady Hornets loaded the bases on singles by Johnson, Chaloner and Works in the top of the fifth but Arnold did a good job of escaping without giving up a run.

In the bottom of the frame, Piha walked and Alex Sullivan pulled a single to left. But those would be the last baserunners the Tigers would manage and they didn’t budge off first and second as Jenkins induced a pop to second by Lacina, struck out Cooper and got Lauren Sullivan to bounce to short.

Jenkins then led off the top of the sixth with a single to left. Moments later, Taylor lined her 11th home run of the season over the boards in left to make it 9-4.

Johnson was robbed of a hit by Piha, the Bentonville center fielder who ranged far to make a running catch in right-center. And that probably saved more runs because Chaloner followed with a double and Works beat out an infield hit. Both, however, were stranded when Arnold closed the inning with a strikeout.

Jenkins retired the first two in the sixth then McGuirt lofted a fly to shallow left center. Works sprinted in and made a diving catch just before the ball reached the ground. That put the Lady Hornets just three outs away from the championship.

But they still had some work to do on offense in the top of the seventh. Bruick lashed a double past third but held as Wilson legged out a double. Jenkins hit a shot to third that Alex Sullivan grabbed and, in one motion, tagged Bruick who was trying to scramble back to the bag.

Despite the two quick outs, the Lady Hornets were not done. Taylor singled in Wilson and, after Sory singled, Johnson put the finishing touches on the scoring with her long home run.

She made another fine play on a liner to third in the bottom of the inning for the second out. Despite the fact that there was some confusion about the count on Sullivan, Jenkins finished it with the strikeout and the Lady Hornets converged for the traditional championship dogpile on the infield.