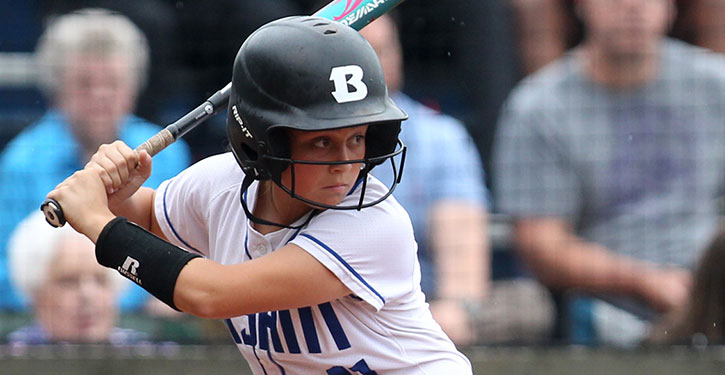 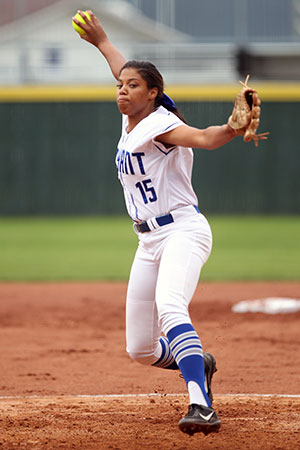 With one out and two on base in the bottom of the seventh and the Bryant Lady Hornets trailing the Bentonville West Lady Wolverines, 3-1, Meagan Chism belted an 0-1 pitch to deep left off of Bentonville’s pitcher Alex McManus, a Notre Dame University commit.

Bryant fans, having ridden the emotional roller-coaster of the Class 7A tournament semifinal on Saturday, jumped to their feet while those that were already standing rushed to get a better view. Chism’s blast appeared to be headed out of the Cabot Lady Panthers’ yard for a dramatic walk-off win that would’ve sent the Lady Hornets to Bogle Park for the State championship game against the two-time defending State champ, Bentonville.

But it hit off the fence. No more than two feet from the top.

Regan Ryan scored from second to make it 3-2. Sarah Evans went from first to third and was held with just one out and a strong throw in from left. Chism rolled into second with a double.

McManus, just back from injury and in her first inning in relief of starter Emma Wood, rallied. She struck out Bryant’s senior pitcher Raven Loveless then got senior DP Brooklyn Trammell to bounce back to the circle as the Lady Wolverines finished off a 3-2 upset of the Lady Hornets, the number one seed from the 7A-Central Conference.

The bitter defeat ended a splendid 28-5 season for the senior-laden Lady Hornets, right where it hit them a year ago at the hands of the rival North Little Rock Lady Charging Wildcats; a win away from playing for the title. It was the last high school game for Loveless and Trammell, as well as Evans, Callie Bradley, Ryan, Regan Keesee and Maddie Stephens.

It’ll be an all-Bentonville championship game. 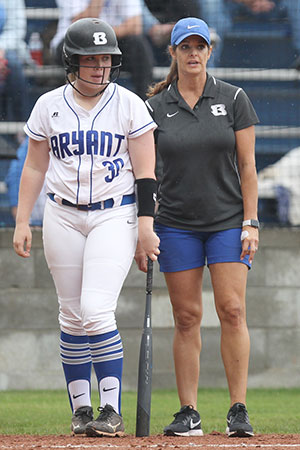 The Lady Hornets managed just two runs despite 12 hits, three from Ryan, who finishes as the state record-holding in singles in a career. Three more for Chism. Two more for Maddie Thompson, Evans and freshman Bella Herring.

But Bentonville West and Wood kept wriggling off the hook.

Loveless pitched well enough to win for Bryant, allowing single runs in the third, fourth and fifth, including what proved to be the difference maker, a solo homer with one out in the fifth by Ryan Rassi.

The Lady Hornets made a bid to put the relatively young Lady Wolverines on their heels in the first inning. With one out, Thompson singled and Evans reached on an error by Wood that had runners at second and third with one out. Thompson tried to sneak home as it appeared the Lady Wolverines weren’t paying attention. On a bang-bang play, she was ruled out at the plate. Evans, then got caught too far past second to end the inning.

It was aggressive base-runner, a hallmark of Bryant’s success this season. It forced Bentonville West to make plays and, somewhat surprisingly — particularly in light of Wood’s wild throw to first — they did.

Loveless pitched around a one-out error in the second then Chism led off the home second with a double to right-center. Loveless sacrificed her to third but Wood retired the next two to strand her there.

In the third, Alyssa Cordell singled with one out for Bentonville West. Base hits by Jazmine Dodd and Hallie Wacaser loaded the bases. Chism, the Bryant catcher, tried to catch Dodd off second but her throw trickled away from Alissa Suarez, who scrambled after the ball and fired home as Cordell tried to score.

And she appeared to be out. The throw pulled Chism up the third-base line where she made the catch and the tag. But Bentonville West coach Anthony Cantrell appealed, claiming that Chism had interfered with the runner’s path to the plate.

And, after a conference among the umpires, he won the appeal. Cordell was ruled safe.

Bryant head coach Lisa Dreher, who had picked up her 200thwin at Bryant on Friday against Fort Smith Southside, counter-argued but to no avail and it was 1-0.

But Dreher won a subsequent appeal. A single by Honesty Holt appeared to score Dodd but, the Lady Hornets appealed that Dodd had missed third on her way to the plate. She was ruled out and no run scored.

After an intentional walk to West slugger Anna Griffin, Loveless ended the inning by inducing a comebacker off the bat of Rassi.

Ryan singled with two down in the bottom of the third and was stranded.

In the fourth, singles by Endya Moler, Sydney Sneed and Cordell made it 2-0. With the bases loaded, Loveless escaped by getting Wacaser to pop to Evans at short and Holt to groundout to Suarez at second.

Chism singled with one out in the bottom of the fourth and Loveless followed with a bloop to right-center that fell in. But Dodd, the speedy West centerfielder, got to the ball in time to throw to second to get a force on Chism.

Bradley, running for Loveless, swiped second but was left there when Wood ended the inning with a strikeout.

Rassi’s blast made it 3-0 in the top of the fifth. Moler singled but Loveless retired the next two to get the Lady Hornets back to the plate.

And, with one out in the home half of the inning, Herring drilled a triple to left. With two down, Ryan singled her home.

Knocks by Thompson and Evans loaded the bases with Chism at the plate. Unfortunately, it proved to be the only time the Lady Wolverines could retire her. She popped to second.

But the Lady Hornets had turned the momentum. Loveless, who retired the last eight batters she faced, set down West in order in the top of the sixth.

In turn, Trammell reached on a one-out error and, with two down, Herriing singled to send pinch-runner Joelly Calhoun to third. Suarez swatted a fly down the right-field line that West’s Alyssa Sullins got to in time to haul down at the foul line to end the threat.

Loveless waded through the heart of the West lineup in the top of the seventh, setting up the dramatic finish.